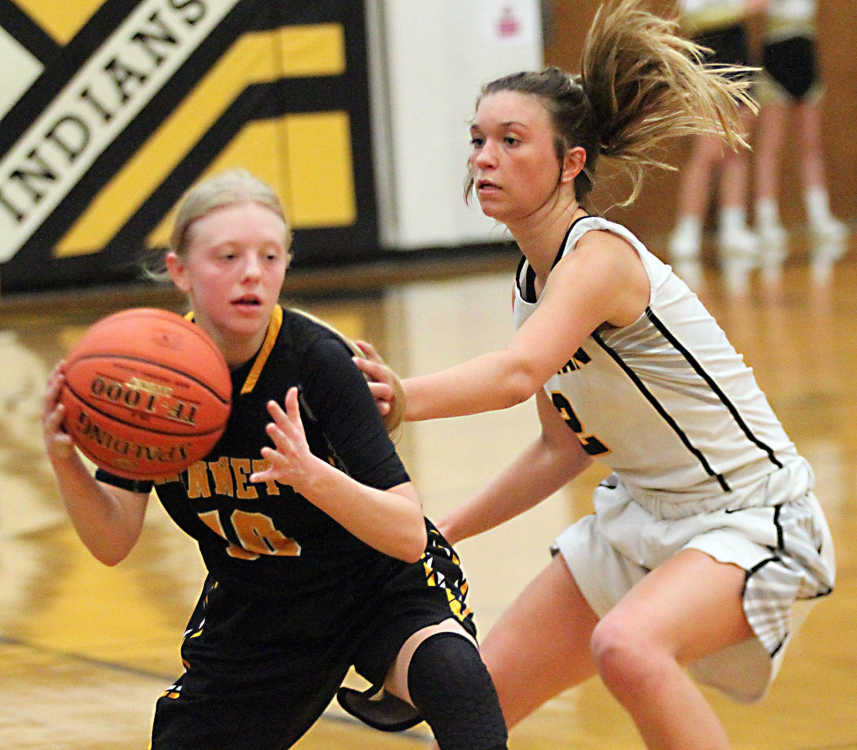 KENNETT, Mo. - Favorites are set to collide in the championship of the Class 3, District 1 girls basketball tournament after the top two seeds won their respective semifinals by double digits Monday night.

The No. 1 seeded New Madrid County Central Eagles (20-6) will take on the No. 2 seeded Doniphan Donettes (21-7) Friday at 6 p.m. in the title game at Kennett High School.

“It’s going to be tough Friday night,” New Madrid County Central coach Toby Heeb said. “I think every team in our district has improved since last season. It hasn’t been an easy road at all this year. But our girls have been here before. We’ve got four girls that played big minutes on the last two district championship teams. I think that experience should help us come Friday night."

“The only time we could have seen them in the regular season was at the Twin Rivers Christmas Tournament and it didn’t work out for us to play each other then,” Doniphan coach Adam Epps said. “New Madrid County is a high-caliber team with some really good athletes. But we are really looking forward to facing them Friday night. 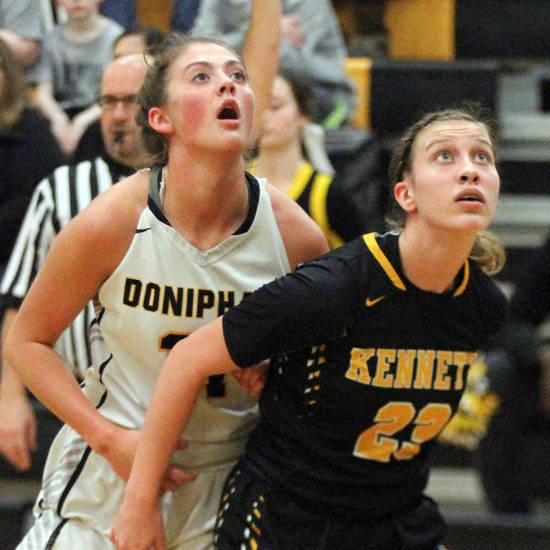 Doniphan outscored the No. 3 seeded Kennett Indians by five points or less in every quarter on its way to a 39-28 victory in the nightcap semifinal Monday.

Epps said Kennett provided his squad with the test it needed after playing soft competition the last two weeks.

“We’ve not played a team as competitive as Kennett since we played Neelyville in the OFC championship,” he said. “We’ve got to fix our schedule a little bit moving forward because it took us a half to adjust and get going tonight. Then in the second half we played really good defense and they didn’t score very much. We have to play defense if we are going to be in games and I was proud of the way our girls came out after halftime. But hats off to Kennett because they played their guts out.”

Neither team led by much until late.

Doniphan jumped out to a 12-5 lead early in the first quarter. Kennett cut the deficit to 12-9 by the start of the second quarter and took a brief 16-15 lead with 3:40 left in the first half. Doniphan scored the final five points of the first half to move back ahead 20-16 at halftime.

Doniphan increased its lead to 27-21 after winning a low-scoring third quarter 7-5 and also won the fourth quarter by five points.

“They hurt us inside a lot,” Kennett coach Aaron New said. “Their size hurt us. Their coach does a great job. They executed some plays at the end. It seems like in every quarter that had a set play here or there that made a little bit of a difference. But I was proud of the way our girls competed tonight.”

“It’s no secret,” Epps said. “Everybody knows about Emily Ederer. In my opinion, she’s one of the best players in Southeast Missouri. They started doubling down on her tonight. She distributed the ball to other girls when she had to and got us some good, open looks.”

Senior guard Mallory Morrow added 10 points. She hit both of the Indians’ 3-pointers.

“I thought we were pretty balanced offensively and both of those girls did a good job," New said.

Kennett finishes its season with a record of 13-14. Its graduates two of the 13 players on its varsity roster - Antonia Randle and Morrow.

“She played probably her best three basketball games of the year at the end of the season,” New continued. “About halfway through the season she lost her starting spot then she earned it back and played great for us at the end. It’s a great lesson for our girls to learn that it’s important to stick to it and keep going when things don’t go your way. We are very proud of Mallory for doing that.” 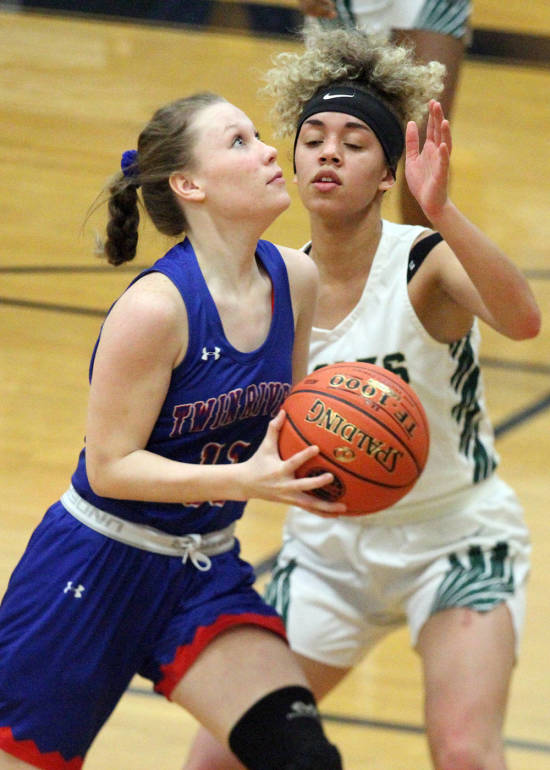 New Madrid County Central junior guard Alivia Hartman opened the game on fire in the first semifinal against Twin Rivers Monday. Hartman recorded 10 of her team-high 29 points in the first quarter as the Eagles built a 22-7 lead by the start of the second quarter. 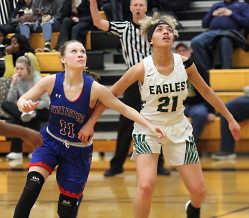 “Alivia got going early,” Heeb said. “She does a good job attacking the basket and not settling for jump shots. We were prepared for them to force us to shoot from the perimeter. We wanted to make sure we continued to attack the lane and let our defense work for us.”

The Eagles, which forced frequent turnovers with its full-court press, also won the second quarter by double digits to pad its lead to 43-16 by halftime.

“Our press is what we depend on,” Heeb said. “We knew we had to turn it up a notch tonight because they had seen our press before.”

Twin Rivers played New Madrid County Central to a 29-all stalemate in the second half as the Eagles secured a 72-45 victory.

“NMCC is long and athletic,” Twin Rivers coach David Crockett said. “Teams with size have hurt us all season. I don’t think we did a great job of handling their press the first half. In the second half, we settled down and played like we are capable of playing. We just came out a little flat but they are a good basketball team. They all well-coached, play hard, and they are used to winning district tournament games.”

Junior Ayannah Ruff tallied seven points in each half to finish with 14 points for the Eagles. Junior Shakyra Wright also scored in double digits for the Eagles with 13 points.

Junior Jaylynn Williams, who made seven of nine free throws, paced Twin Rivers with 13 points. Junior Abbey Hester, who made four of six free throws, also finished in double digits with a dozen points for the Royals.

Twin Rivers finishes its season with a record of 14-14. It graduates three of the 15 players on its varsity roster - Alissa Austin, Madyson Foust, and Natalie Baxter.

“We are going to miss these three girls’ dedication,” Crockett said. “All three of our seniors will be highly successful in life because they have great character and are great young women. I wish all three of them the best.” 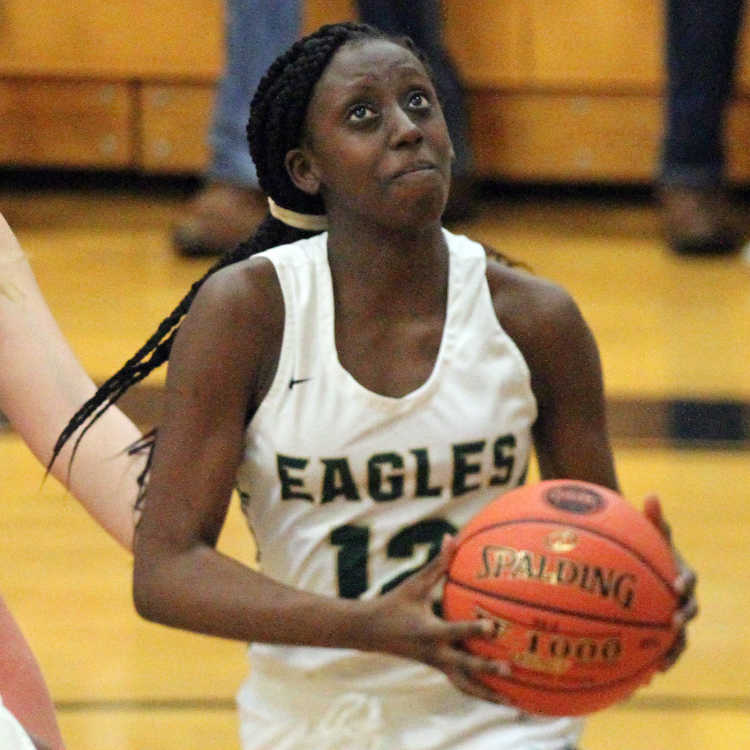