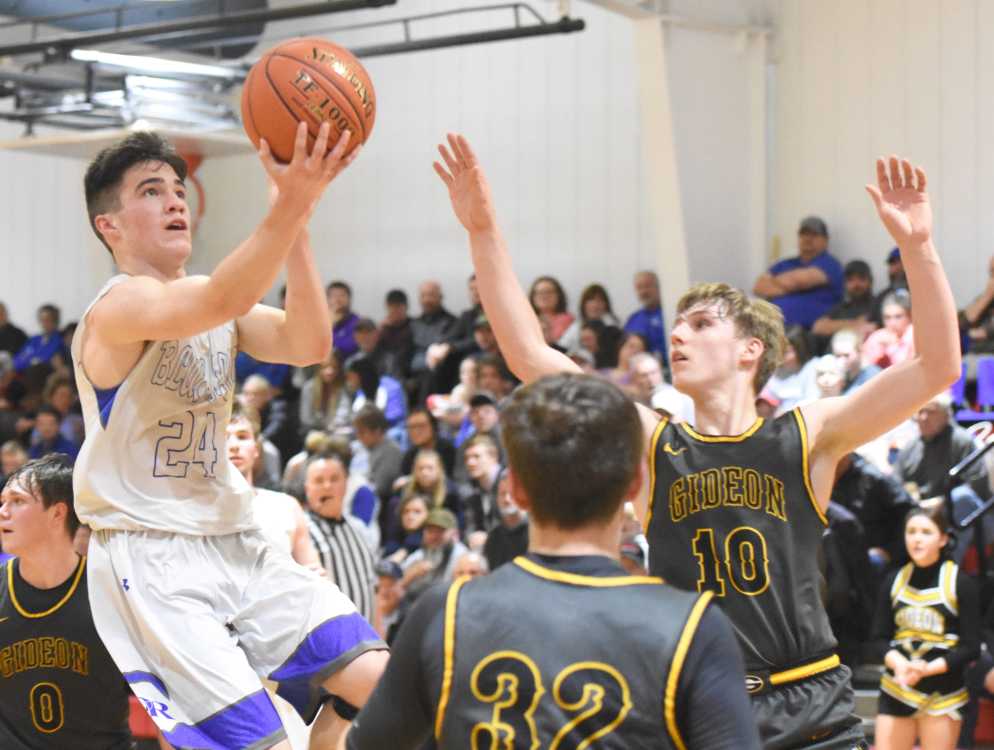 The all-state guard led the second-seeded Blue Jays to a 64-46 win over third-seeded Gideon in the semifinals of the MSHSAA Class 1 District 2 boys basketball tournament Monday night at Bell City High School.

Layton scored a game-high 23 points despite playing with tendonitis in both knees — as he has all season.

Trimmer said that Layton acts as a decoy from the perimeter.

“The other guys are going to run the offense. He sets things up and takes care of the ball,” Trimmer said. “You still have to respect him. I mean, he was the leading scorer in the state of Missouri last year, averaging 35 points a game. He’s only at 24 this year but everybody who’s seen him knows at any given second, he can explode. … People respect him and when they do, that opens the lane for Schamburg and LeGrand.”

The Bulldogs concluded the season with a 22-6 record that included a 16-game win streak that began at the Bloomfield Christmas Tournament and lasted until the final game of the regular season.

“We had a really good year,” Gideon coach Jordan McGowan said. “The team really put it together after Christmas. I hate for the team that it ended like this.”

Seniors Gage Stover, Sam Williams and Logan Woodard combined for 32 points in the loss. Williams scored a team-high 22 points and Stover had 10.

Layton scored 11 of his points in the first quarter where the Blue Jays took the early lead.

The Blue Jays shot out to an 8-2 lead behind a strong start by Layton, who scored six of those points using dribble penetration.

Schamburg sparked another 8-0 rally to push the lead to 16-4. He scored on a fast break after a defensive rebound and made a 3-pointer.

Gideon came back and sliced the lead to 16-11 on a 3-pointer by Zach Swift and four points by Williams, who scored eight of Gideon’s 11 first-quarter points.

Layton made a pull-up jumper to give Oak Ridge an 18-11 lead after one quarter.

Oak Ridge shot 6 of 13 (46%) from the inside the arc in the first quarter, while the Bulldogs struggled from the perimeter, making only one 3-pointer in six attempts after missing their first four shots.

“Defense was the key for us tonight,” Trimmer said. “We really had to elevate our defensive play. We didn’t play that great defense in the game against Scott County Central (in the first round). We relied more on the offensive end.

“I really felt that Gideon is a much better shooting team. So we really had to extend our trap, our zone, and force them to take contested 3s. That really hurt (its) offensive output.”

Overall, Gideon went 2 of 19 from behind the arc.

“I thought Coach Trimmer came out with a really good game plan, putting havoc on our guards right at the half-court line,” McGowan said. “Hat’s off to them. They did a good job defensively tonight.”

The Blue Jays turned up the defensive pressure in the second and third quarters where Schaumburg scored eight points.

“I think he had seven or eight steals in the second and third quarter,” Trimmer said. “I think he converted (four) of those into

The Blue Jays scored most of their baskets from inside, while shooting 10 of 15 (67%) from inside the arc. They scored on dribble penetration and fast breaks following turnovers and defensive rebounds.

The Blue Jays scored 12 straight points to push the lead to 32-15 when Kyran Newell converted a turnover into a layup.

Gideon trimmed its deficit to 15 points three times before halftime. Williams scored from along the baseline to cut the lead to 38-23 at halftime.

The Bulldogs sliced the lead to 11 (38-27) on a pair of driving layups by Stover, but they came no closer and trailed 46-31 going to the fourth.

Oak Ridge extended its lead to 22 early the fourth, as Layton sandwiched a pair of baskets around a 3-pointer by LeGrand. The Bulldogs never cut their deficit to less than 15 the rest of the way.