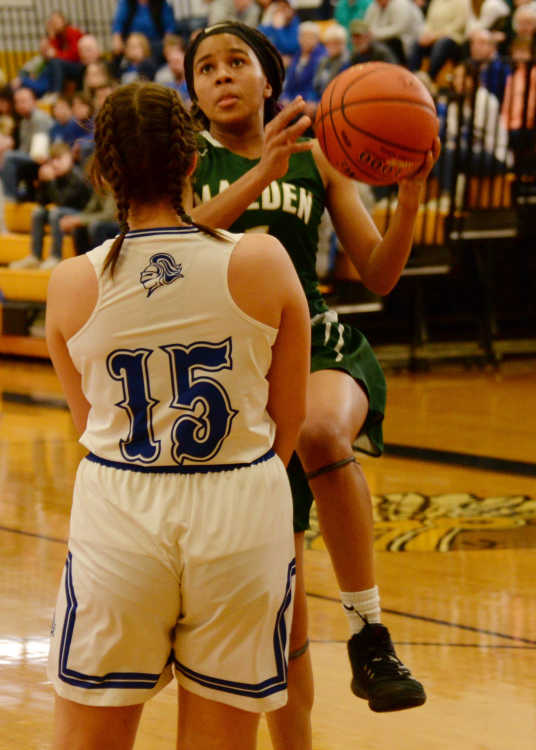 Twin Rivers had commanded a decent margin throughout the entire game but things changed quickly.

Malden applied a full-court press and cut the lead down to just one point with three minutes left.

Malden was only down one point again with under a minute to play but committed a turnover. Twin Rivers followed with the next five points as it escaped with a 65-59 quarterfinal win.

“Malden’s not going to quit,” Twin Rivers coach David Crockett said. "Everybody’s playing the same way right now, like there’s no tomorrow. When you’re playing that way, nobody’s going to quit. Luckily, we didn’t quit, and we were able to pull out a win.”

The deficit remained around 10 points most of the game, but the Green Wave never went away.

“Fourth quarter, I don’t know if we thought we had it in the bag, or what. I thought our intensity level went bad; it was really low,” Crockett said. “But, we actually stepped back up and pulled the win out in a tight ball game, and that’s what good teams do. Even when things weren’t going well for us, we found a way to win.”

Twin Rivers made key free throws down the stretch to extend the winning margin to six points.

Twin Rivers was led by Jaylynn Williams, a junior, who scored 20 points.

“She’s the catalyst for us. She handles the ball and she’s kind of the coach on the floor for me,” Crockett said. “Down the stretch, she became that leader that we needed and took care of the basketball. She got it where it needed to go, and good things happened for us.”

Saulsbery was the leading scorer for the Green Wave. Malden’s head coach, Josh Herring, praised the junior’s leadership and improvement. “She’s very important, and she’s come a long way in her game,” he said. I’m very proud of the way she played tonight. She’s going to be one of those kids that continues to get better. That’s what we ask out of her.”

Herring mentioned how pleased he was with her fourth-quarter effort, where she scored 10 of her 20 total points.

The close loss was emotional for the Malden coaches and players.

“It was a tough loss,” Herring said. "It was a game where we battled throughout the entire time. I can’t ask for any harder effort out of these girls. They played so hard. They just didn’t get the outcome we wanted.”

Malden finished its season at 11-12, which is an improvement from their 5-17 record last year.

“Next year, we hope to build and grow,” Herring said. "Last year, we had a really young group. We had everybody come back this year, and we finished at 11-12. Hopefully, we can continue to grow and build on what we’re doing, and improve as a team.”

Twin Rivers will play No. 1 seed New Madrid County Central in a district semifinal game Monday at 6 p.m. The two teams faced each other earlier in the season, with New Madrid winning on the road 63-48.

“They’re a different monster,” Crockett said. "They’re a really good basketball team and really well-coached. We’re going to celebrate this win for about five minutes. Then, we’re going to get focused on what we have to do, come up with a game plan, and give it all we've got and see what happens.”