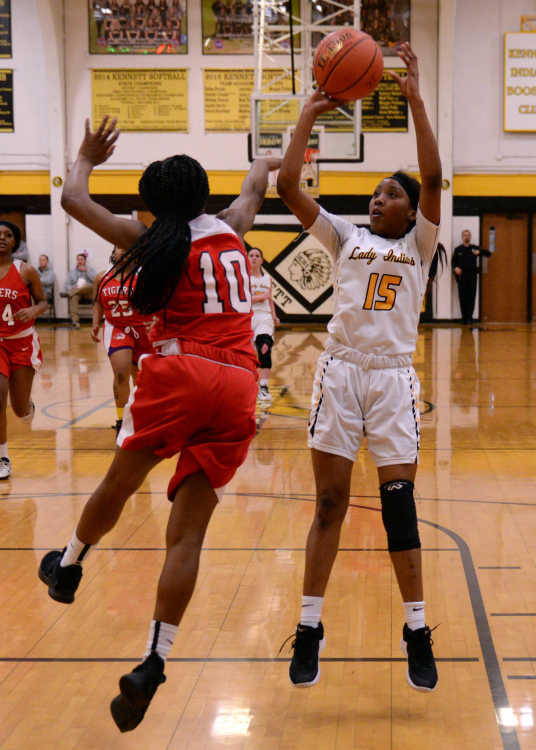 KENNETT, Mo. - The No. 3 seeded Kennett Indians varsity girls basketball team played well from the tipoff and scored 31 points in the first half in its matchup against the No. 6 seeded Caruthersville Tigers on Saturday.

Host Kennett rode its lead past Caruthersville to a 49-30 victory in a Class 3, District 1 quarterfinal.

Aaron New, the head coach for the Indians, was pleased with his team’s first-half performance.

After being down 31-9 at halftime, Caruthersville had a better second-half effort. Caruthersville outscored Kennett 21-18 in the second half, as the Indians struggled to score.

“We dug ourselves a hole in the first half. We didn’t play with very much energy offensively or defensively,” Caruthersville head coach Bradley Sneed said. “I think that the first half pretty much told the story of the game.”

Kennett was led by freshman Taleigh Harrell, who had 14 points. Kyra Jaco, Kaniya Madlock, and Caroline Patton each had eight points for the Indians, and they each drained two 3-pointers. Anelle Harris scored seven points, and Mallory Morrow had four points in the win.

Caruthersville finishes its season with a 7-12 record. Despite the losing record, Sneed is optimistic about next year.

“Six games we lost were by an average of about three points,” Sneed said. "[Keara] Johnson is leaving, but we’re bringing back some girls that can really help us. We had a few get hurt that didn’t play this year. Next year, I like our chances.”

Kennett will play No. 2 seed Doniphan in a district semifinal game on Monday at 7:30 p.m. The two teams faced each other earlier in the season, with Doniphan rolling to a 66-32 road victory.

“They’re a very good team,” New said. "They bring a lot of pressure, so we’ll have to do a good job of handling their pressure. When we get opportunities to make easy buckets or if we get some easy shots, we’re going to have to make them. If we come and play hard, I think we’ll have a decent chance.”