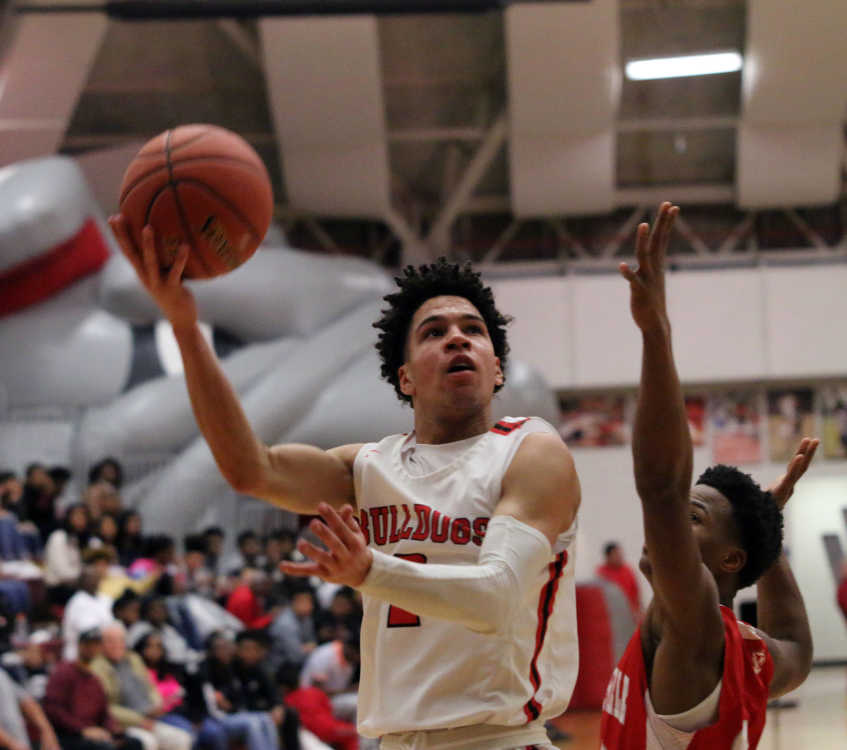 Sikeston's Payton Howard eyes the basket for a layup, against Caruthersville, on Thursday, Feb. 20, 2020, at the Sikeston Field House.
Alex Wallner/Standard Democrat

SIKESTON —Even though Tuesday’s win against New Madrid County Central was officially “Senior Night,” the Sikeston Bulldogs still had to strap it up for one final game at the Sikeston Field House on Thursday.

Senior Night was a celebration of the seniors, but the real emotions came in Thursday night’s home finale as Sikeston defeated Caruthersville 90-66 at the Field House.

The Bulldogs were dominant against the Tigers, forcing 28 turnovers and putting six different players in double figures.

However, the real story for the Bulldogs was the raw emotion following the game for Sikeston’s six seniors.

“We played a really good game against a good team,” Sikeston senior Colby Henson said. “It was a very emotional night. Lots of emotions for us. All six seniors, we’ve put a lot of time into this gym. We put lots and lots of shots up in this gym, even as a kid. It’s just a very surreal moment. It’s probably the last time I’ll ever put a jersey on in here.”

After the game, the Sikeston seniors posed for photos shed tears and hugs and tried their best to soak in every moment before leaving the floor for the final time in a Bulldog uniform. 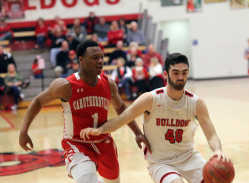 “It’s an emotional roller coaster,” senior Clark Steward said. “You come out, and you’re focused on the game, and you’re focused on winning. There about the start of the fourth quarter, my emotions flipped. They were holding back tears the whole fourth quarter, realizing you’re never going to get to do this again. It’s tough, but we’re lucky that we got to do this for four years.”

Payton Howard, who, along with Steward, played significant roles with the varsity Bulldogs as freshmen, was choked up after the game.

“It didn’t hit me until I saw my longtime friend Clark, he started crying so that walk back to the locker room after the game, it was a lot of emotions that started to hit me,” Howard said. “Going through the hallway and seeing all the pictures and seeing the picture on the window with all the fans, it reminded me how great this place is. I’m going to miss playing in it.”

“It was very emotional because I know I’ll never be able to step back on that court again,” Harrison said. “I just thank every moment I had on it, and I’ll be forever grateful.”

Gage Rolwing and Kenyon Smith are the other two seniors that played in their final game at the Field House on Thursday.

“These seniors have been such a good group of guys to coach,” Sikeston coach Gregg Holifield said. “They always come in ready to work, and they’re just such great guys to be around.”

On a night where they seniors stole the post-game moments, it was a lanky 6-foot-4 sophomore, Cleo Taylor, that led the team in scoring in just his third stint of meaningful varsity minutes.

“Cleo has improved so much since the start of the season,” Holifield said. “He has good length and good timing, and he will have a chance to really help us heading into district play.”

Sikeston’s full-court press began to take effect, however, as the Bulldogs went on a 12-0 run to take a 16-9 lead.

Sikeston (14-8) never looked back from there as they continually pulled away from the Tigers.

“They’re just a better team,” Caruthersville coach Lamont Bell said. “We’ve been struggling down the stretch here lately. I thought we played well for a half. They caused a lot of turnovers with their press, and they scored on every one of them. That separated us in the game, and we couldn’t get back. Great job by Sikeston, they disrupted us, kept us from doing what we wanted to do. I told them we wanted to come up here and compete. Every year we come in and give Sikeston a game for a while, and it always helps us with districts.”

The Bulldogs put the game away in the third quarter, out-scoring the Tigers 21-13 to take a 71-42 lead into the final frame.

Howard had 13 points and five assists.

Sikeston’s second-leading scorer this season, Leroy Atkins, made his return to the lineup after missing 2 1/2 games with a hip flexor injury. He finished with 11 points in limited minutes.

Henson scored 11 points, and junior guard Heath McCain scored all 11 of his points in the fourth quarter.

Sikeston will travel to Jackson tomorrow in their final SEMO Conference game. Junior varsity tipoff is at 6 p.m.