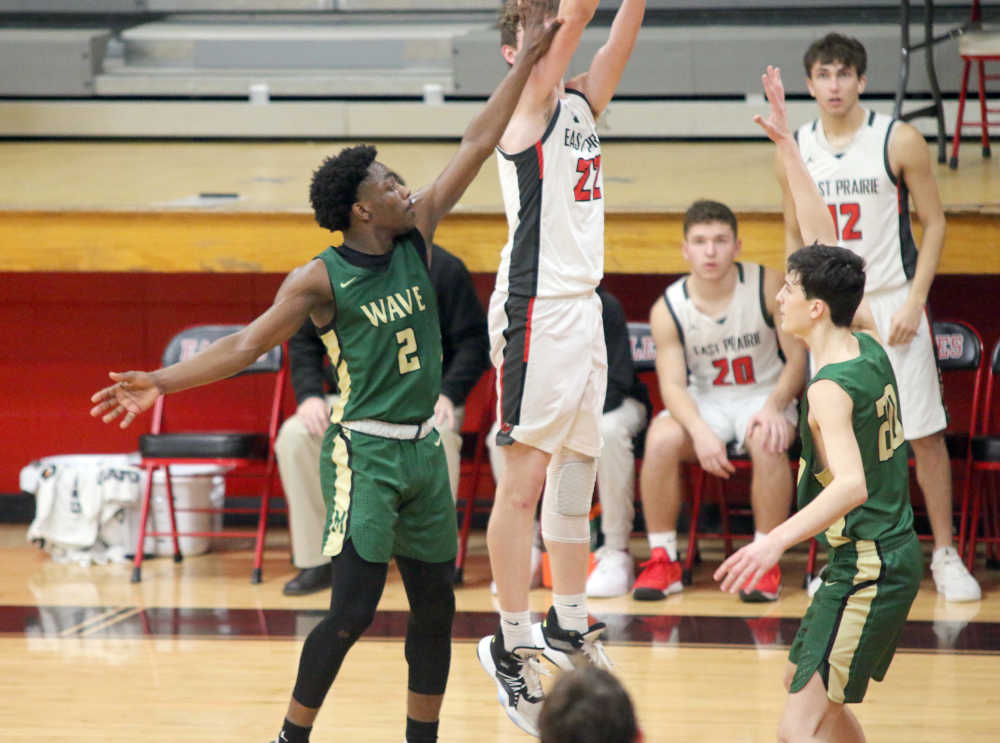 EAST PRAIRIE, Mo. — Nothing was stopping Coy Wade. Not on this night.

Wade showcased his athleticism and explosiveness, as he continually was around the ball, created turnovers, and turned the Eagles’ miscues into points.

The junior scored 24 points in the second half and was a problem for the Eagles to solve.

“I thought the best thing that he (Wade) did tonight, was that he turned his defense into offense,” Malden head coach Cole McBroom said. “Whenever he can get some deflections, hands on the ball defensively, he can easily run out and get them. Whenever we do that, and we get going up-and-down, especially with someone as athletic as he is, we’re not bad; we can compete with a lot of people.”

On the first possession of the frame, he knocked down a three-pointer from the top of the arc to give Malden a 35-30 lead with 7:43 remaining.

Toward the end of the period, Wade showed off his explosiveness as well.

With 1:40 left and the game within two points, 42-40, Wade stole the ball and used his quickness to get free and throw-down a breakaway slam dunk to push the Green Wave lead to four. His dunk was one-of-two highlight-worthy slams on the night, with the other coming in the fourth quarter, as he got free after a missed shot and three down a thunderous, tomahawk slam, that pushed the lead to 58-51, with 25 seconds left.

He then followed up his slam with an and-one with 51.3 seconds left in the period, which increased the lead to five, 49-43. Wade ended the third period with 13 points, as he nearly outscored the entire East Prairie team, who finished with 15 points.

Heading into Tuesday, McBroom was without a key starter, as sophomore Sientez Lerma got sidelined after an injury on Friday night, ending his sophomore campaign altogether.

Without the services of Lerma, McBroom was forced to shake up his rotation but said that it is another way to get other, younger players involved.

“Sientez broke his hand Friday night,” McBroom said. “It makes us a little thinner because we lost another one a couple of weeks ago that got some playing time. It’s just another opportunity for another young guy to step up. And it’s a great opportunity for someone like Shay Amoss and Lamar (Smith) to step up.

“Lamar plays a lot of minutes, but now he gets to step up offensively. And then Shay, who doesn’t play a whole lot of minutes, gets an opportunity to play a ton and get some work done. I thought Shay (Amoss) and Drew (Blankenship), in the second half of the game when Marques (Jones) was out, played extremely well tonight.”

A strong first half from Marques Jones looked like what was going to be an excellent evening for the 6-5 sophomore.

Jones scored 17 points in the first half — 13 in the second quarter — as the Green Wave took a narrow, two-point lead into the locker room.

To start the second quarter, sophomore Jase Aycock increased the Eagles lead to three points, 17-14, on a short shot in-the-paint, with 7:42 left.

Jones, though, answered right back as he muscled his way to the basket and converted a layup that tied the game at 17, with 7:35 left.

Jones’ basket started, what was, a 6-0 run for Malden, after Wade scored four-straight points and forced the Eagles to call a timeout, with 6:36 left.

A back-to-the-basket player, Jones showed off his footwork and touch in the frame.

With 2:14 left, Malden regained a one-point lead, 25-24, after Jones caught the ball near the basket, got his defender to fall, and scored on an easy layup.

Then, after East Prairie returned the favor and took a 27-25 lead on a three-pointer from junior Evan Howell on the right-wing with 1:56 left, Jones got an and-one at the other end of the floor, made his free-throw, and gave Malden a one-point lead yet again.

A resilient Eagles team, though, continued to fight back and eventually regained it’s lead after senior Jack Scruggs nailed a three from the right corner to push the lead to 30-28.

Twenty-five seconds later, though, the game was tied again, after Jones caught the ball on the low-post, and scored. He would add another basket at the end of the quarter as well, to equal the halftime total.

His night, however, ended sooner than he expected.

With 7:03 left, Jones and Eagles senior Harrison Moore got tied up, with technical fouls getting issued to both benches as a result.

Jones went on to make both of his free-throw attempts, before sitting for the remainder of the game.

Just as Malden was missing a key piece to the team, East Prairie also felt the same pain.

Already thin in the front-court, one of the Eagles tallest players — sophomore Garrison Scott — did not dress after suffering an injury during practice on Monday.

“Garrison does a great job on-the-glass for us,” East Prairie head coach Casey Knight said. “We knew we were going to miss him there. Yesterday, in practice, his hip just started hurting. He tried warming up and couldn’t go. Better be safe than sorry, but we can’t make excuses.”

In his absence, sophomore Cooper Towe contributed some quality minutes. He finished with seven points, all in the fourth quarter.

Howell led East Prairie with 19 points and hit five three-pointers. Scruggs had 14 and made two from long-range, while Aycock added 11.