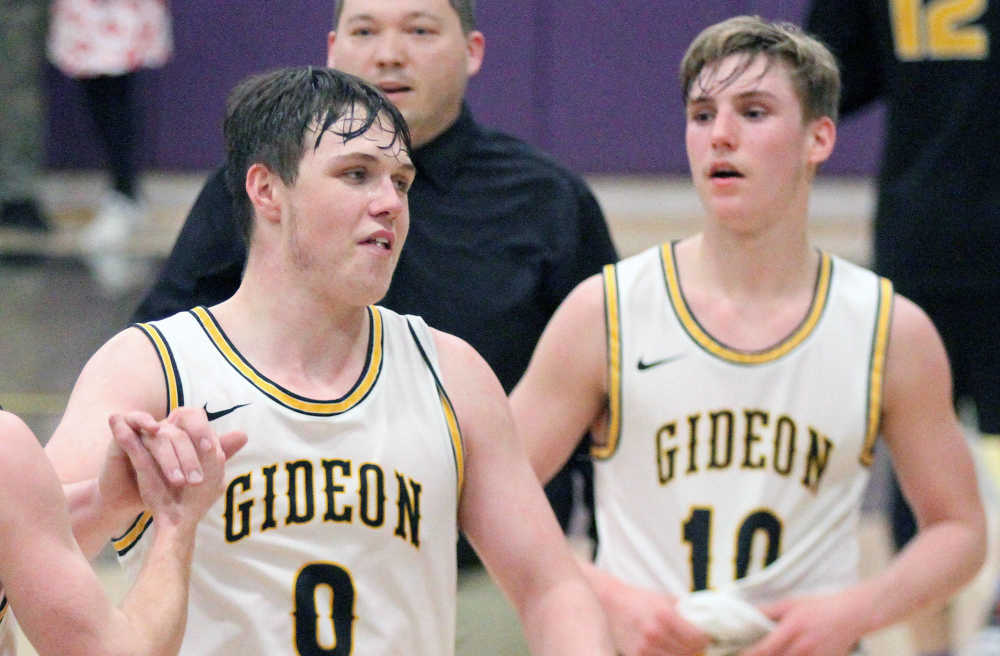 CLARKTON, Mo. - The Gideon Bulldogs coaching staff told their squad they could celebrate like a WWE champion if they took home the top prize at their conference tournament. 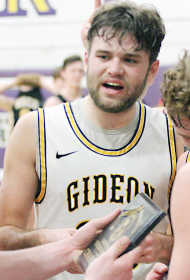 “The kids gave our assistant coach Jeremy Walker a WWE championship belt last year on Senior Night,” Gideon head coach Jordan McGowan said. “We told them at the beginning of the season if they won the conference they would get to participate in a celebration with the championship belt.” 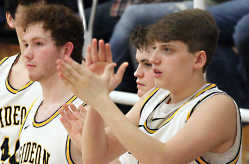 The championship belt awaited the players in the locker room after Gideon won a hard-fought battle against the three-time defending champion Risco Tigers Friday night.

No. 1 seeded Gideon won the first quarter by two points and the next three quarters by one point as it edged No. 2 seeded Risco 63-58 in the title game of the Tri-County Conference varsity boys basketball tournament at Clarkton High School.

“Coach Walker brought out the belt at the start of the season and said every time we meet one of our goals we get to celebrate with it,” Gideon senior Sam Williams said. “We are going to celebrate tonight.”

Risco led 55-54 after Andrew Rodgers hit a pair of free throws with 3:46 left but did not score again until a second or two before the final buzzer.

Gideon went back on top 57-55 when Williams recorded an old-fashioned 3-point play with 2:32 left.

The Bulldogs padded its lead to 58-55 when Brevin Vires made a free throw with 43 seconds left.

Risco missed a layup and a 3-pointer on its next two possessions.

Williams capitalized on the misses by making two free throws with 18 seconds left and recording an old-fashioned 3-point play in closing seconds to pad Gideon’s lead to 63-55.

Rodgers, who paced Risco with 24 points, followed with a 3-pointer on the other end shortly before time expired to set the final score.

“This game was a dog fight,” McGowan said. “Risco has been in games like this many, many times. Their kids have played in huge games and they gave us everything they had. I really thought Sam Williams guarded well for us tonight. Our kids played really hard and it was a fun championship to be a part of for both sides.”

Neither team led by much in the nail-biter.

Risco opened the second half on a 12-3 run to takes its largest lead at 39-33 with 4:19 left in the third quarter. But Gideon closed out the third quarter with three consecutive 3-pointers to move back ahead 45-41

“They hit three 3’s after we took the lead,” Risco coach Brandon Blankenship said. “We were trying to get out there but they knocked down their shots. Gideon is a good team that is well-coached. Good teams find a way to win and that’s what they did tonight. We had some missed opportunities with a couple missed free throws, a missed layup, and two missed blockouts late. But you just have to tip your hat to Gideon because they found a way to get it done in the end.”

Senior Logan Woodard drained half of the Bulldogs’ eight treys, including three in the third quarter. He finished with 14 points.

“We put a lot of work in,” Woodard said. “We take shots every morning. Our coach is a die-hard 3-point shooter. When we get down he likes to rely on the three and it helped us again tonight. It’s worked all season for us and we hope it continues to fall moving forward.”

“Our guards know how to close out a game,” McGowan said. “We didn’t make free throws late but we got offensive rebounds and did a good job running the clock out with a little bit of a lead. They just handled it really well and finished it out.”

It is the first time Gideon, which has now won 15 straight games, has won the Tri-County Conference Tournament since 2016.

“This means a lot to our team,” Williams said. “We’ve worked really hard this year and the past four years. It’s a big win for us and shows us what we are capable of doing.”

“Leopold is a tough team,” Blankenship said. “They lost to Gideon earlier this season by one point so it appears we are pretty even. But every game in that district will be tough. We’ve got one more regular-season game against Hayti and we will have to work hard in that one. We’ve just got to get a little bit tougher. Our guys work hard and are tough but we’ve got to get a little bit grittier.”

Photo by Dustin Ward, staff
The Gideon Bulldogs varsity boys basketball team with its first-place plaque after beating Risco 63-58 in the championship of the Tri-County Tournament Friday night at Clarkton High School.
Order this photo
Respond to this story