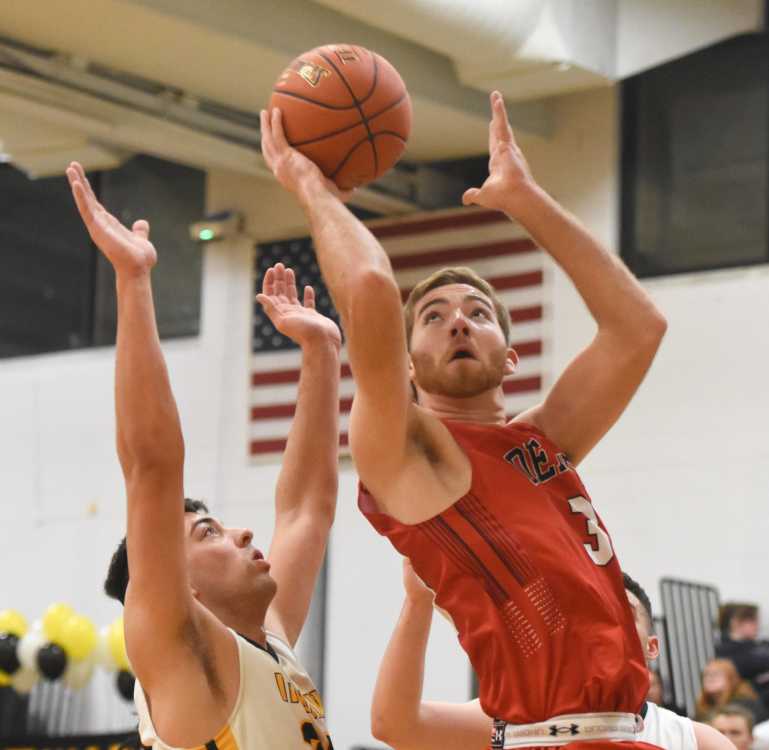 KENNETT Ś The Kennett Indians avenged their loss in the championship game of the Bloomfield Christmas Tournament.

However, they needed a late rally to beat Dexter 60-59 Friday night at Kennett High School.

Ben McMullan made a 3-pointer from the right wing to give the Indians their first lead of the game with 9.5 seconds left. 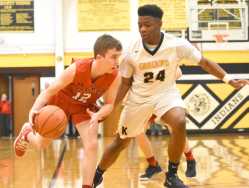 ôI donĺt know if he had shot the ball well for most of the game, but he hit the one that mattered,ö Kennett coach Andrew Halford said. ôIt was a huge, huge shot. Heĺs a good player for us. Heĺs a good kid. Iĺm excited for the moment.ö

Dexter upset the top-seeded Indians 60-37 to win the Bloomfield Christmas Tournament in December.

Despite calling two timeouts, the Bearcats (13-9, 0-5 SEMO) couldnĺt get a shot off before the final buzzer, and Kennett fans stormed the court after the dramatic victory.

Andrew Ellinghouse paced Dexter with 16 points, and Garrett Henson had 14.

Kennett (18-7, 4-4) began trapping near midcourt and forced several turnovers late in the fourth.

ôWhen they were up 14, we were put in a position where we had to press and try to create some turnovers,ö Halford said. ôWe were able to do so. We hit some big shots late. We got to the free throw line. I know we didnĺt convert on some of those free throws but we were stopping the clock.ö

The Bearcats began the final quarter with an 11-2 run to take a game-high 14-point lead (56-42). Henson scored the first three and the final two of the rally.

Dexter committed seven fourth-quarter turnovers with many coming in the closing minutes.

ôWhen they threw that press on, we havenĺt seen pressure like that,ö Dexter coach Chad Allen said. ôWe just made mistakes down there toward the end. They picked up the pressure. Weĺve just got to learn from this.ö

Kennett answered with a 7-0 run behind a 3-point play by Henfling and four points by Harrell.

The Indians cut the lead to 57-51 on a post move by Henfling and to four on three free throws by McMullan. Kobe Gates nailed a 3-pointer with 1:04 to play to slice the lead to 59-57.

Dexter appeared to gain some momentum when Henson drew a charging foul with 30 seconds to go before McMullan hit the game-winner.

The Bearcats threw the first punch, as Kennett sputtered out of the gate, committing four early turnovers.

Henson scored on a post move and Ellinghouse sank a 3 to give the Bearcats a 5-0 lead.

ôWe told the guys at the start of the game, we had to get off to a great start. We couldnĺt get down,ö Allen said. ôIĺm proud of the guys. We played well at the beginning of the game. I thought we did a great job coming out the second half. We extended the lead.ö

Kennett committed only one turnover over the remainder of the first quarter and cut the lead to one on a second-chance basket by Carter Maddox and layup inside by LaĺQuez Pulliam.

Dexter responded with 7-0 rally to take a 12-4 lead. Ellinghouse hit another 3, and Henson scored a couple of baskets on feeds inside by Ellinghouse and Peyton Driskill.

The teams exchanged a pair of 3-pointers, including a buzzer-beater by Dexterĺs Ryder Boles, and Dexter took an 18-10 lead into the second quarter.

Kennett finished strong, forcing several late turnovers and closing the half with an 8-2 run in the final 2:14. Harrell scored on a pass from Gates to cut the halftime lead to 31-25.

The Indians trimmed their deficit to five points twice late in the third on a pair of 3-pointers by Harrell (42-37 and 45-40).