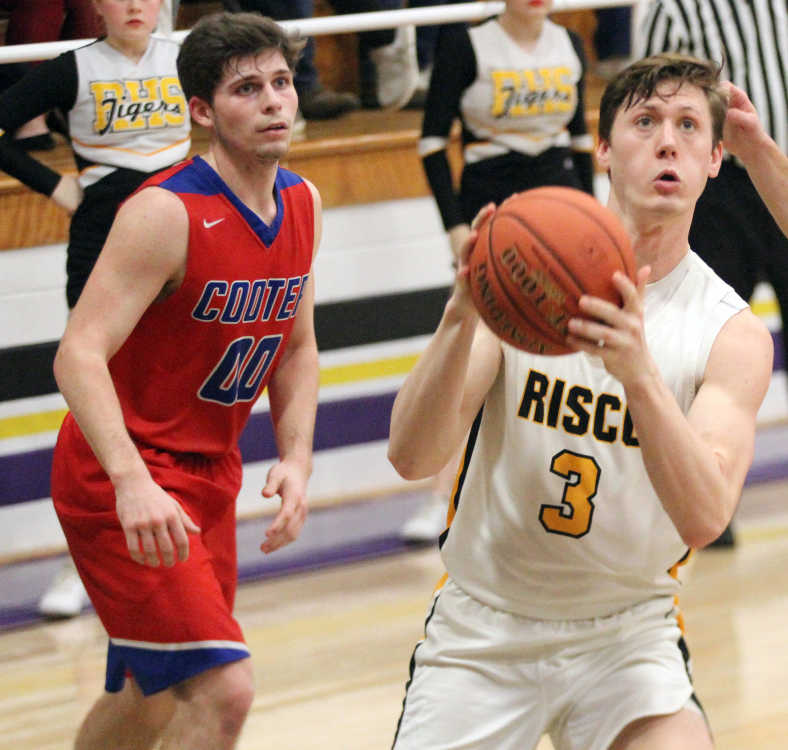 No. 2 seeded Risco outscored the No. 3 seeded Cooter Wildcats by single digits in every quarter on its way to a 76-55 victory in the first semifinal at Clarkton High School.

“Every time we go against Cooter it is a battle,” Risco coach Brandon Blankenship said. “Coach Mathis always prepares hard and tries to take something away from you. But our guys were pretty confident tonight we could get the job done and shot it well.”

Cooter kept things close early as neither team led by more than four points in the first quarter that ended with Risco leading 22-18.

Risco knocked down six of its eight 3-pointers in the second quarter as it increased its lead to double digits at 47-36 by halftime. Senior guard Evan Pipkin helped fuel the perimeter attack. Pipkin, who finished with a team-high 24 points. hit all four of his treys in the second quarter.

“They were really working hard to take stuff away from Meese,” Blankenship said. “They face-guarded Meese full court. Then Pipkin got going in the second quarter. We feel confident about all of our guys shooting the ball, especially Pipkin, Rodgers, and Meese. We just have to find the hot hand.”

Cooter cut the deficit to 63-46 by the end of the third quarter but never got within single digits of Risco in the second half.

“Risco shot it well tonight and here lately teams have been shooting it well against us because we haven’t been guarding anyone,” Cooter coach David Mathis said. “I thought we did contest their shots early in the game tonight. But they took a lot of shots and they were just a lot better than us tonight.”

Jacob Watkins, who scored 51 points in Cooter’s 89-76 quarterfinal win against Southland Monday, led his team in scoring yet again Thursday. Watkins scored 15 of his team-high 20 points in the first half against Risco.

“He’s doing well,” Mathis said. “He’s averaging 30 points in conference games and 27 points in non-conference games. He’s having a pretty good year. We just need some more guys to step up. He’s hitting some shots but we aren’t rebounding or defending very well. Hopefully, we will do that better within the next week or we will be going home early.”

Luke Perkins and Lane McLevain also finished in double digits for Cooter with 13 and 10 points respectively.

Cooter (11-8) turns its attention to postseason play following the conference tournament. Cooter, which has competed in Class 2 in recent seasons, is the No. 1 seed in Class 1, District 1 that begins Feb. 22 at Southland High School in Cardwell, Missouri.

“If we don’t come to play we can get beat by anyone but if we play well I think we have a shot,” Mathis said. “It’s nice to be in Class 1 again. We’ve been in Class 2 eight of the last nine years. It’s tough when you have to go tell your kids you have to beat Bernie, Hayti, Portageville, and the rest of those good Class 2 basketball schools. We are young with a couple of seniors and juniors. I think we will be pretty decent moving forward but right now we are trying to piece it together.”

“We are happy and excited to be back in the championship game,” Blankenship said. “A lot of these guys weren’t starters last season. They had a big goal to get back here on their own and found a way to prevail tonight.”