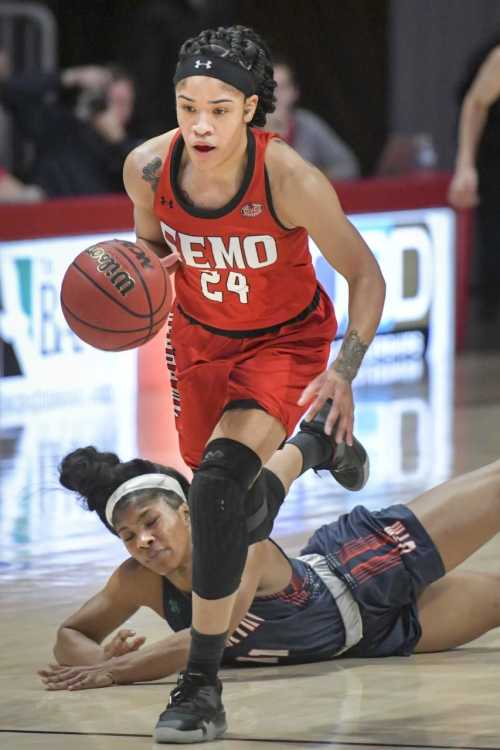 Arguably the best women’s basketball player in the Ohio Valley Conference, UT-Martin’s Chelsey Perry, with her team down by a bucket, had the ball in her hands with a chance to win the game for the Skyhawks in the final seconds.

With the score 71-69 Southeast, the Show Me Center crowd of 805 held its collective breath, fearing Perry - who had already hit three treys on the night – would hit another and send the faithful home with a crushing defeat.

Perry, the highest scorer in the OVC, threw up a desperation three-pointer which hit the backboard, bouncing away harmlessly as the clock ticked down to 0:00.

“I would call myself ‘disahappy’,” said Redhawks coach Rekha Patterson, creating a word to describe her feelings as Southeast (19-5, 11-2 OVC) vaulted into first place in the conference.

“I was greatly disappointed in how we finished,” added the fifth-year skipper, “but happy with the result.”

Southeast trailed UT-Martin, with the exception of three early tie scores, until 2:41 was left in the third quarter.

“Carrie had gotten a little frustrated early in the second half, so I subbed her out,” said Patterson. “I reminded her of who she was and who she is to this team.

“Carrie returned (after that) and moved differently,” Patterson explained. “Carrie’s confidence and leadership (were) key to the win.”

Junior Tesia Thompson led Southeast with 22, including a three-pointer, but in a postgame interview said she had trouble shaking her 3-for-8 free throw performance in the fourth quarter.

“When Perry let go of that last shot,” Thompson said, “I was thinking I had cost us the game.

Perry had a remarkable game for the Skyhawks (15-9, 11-2 OVC), leading her team with 36 points, eight rebounds, five steals and two blocks.

“Let’s get this clear,” said an admiring Patterson, “nobody stops Chelsey Perry, but we did slow her down a little.”

Thompson, who has never had another college coach, said Patterson has grown as a leader.

“In the past, (Coach P.) would have come into halftime and yelled at us,” said Thompson. “But she’s changed a lot.

“Tonight she was calm and got her point across and we respond better (to this).”

Pruitt, a sophomore, logged the most minutes for the winners with 35, and scored all eight of her points in the decisive fourth frame.

“At the end of the game, we said to ourselves, we’re not going to let this (game) slip (away),” Pruitt said. “We said we’re going to go out and take it.”

The ever-cautious Patterson, who is now 74-70 in her fifth season at Southeast, turned aside a suggestion that her Redhawks are now in first place.”

Technically, she’s right. Southeast and UT-Martin share identical 11-2 OVC marks, though if the season ended now, the Redhawks would have the tiebreak given their 1-0 mark against the Skyhawks.

Southeast and UT-Martin meet again on Leap Day, Feb. 29, on the Skyhawks’ home court on the final day of the regular season.

Southeast’s Kennedi Allen went down hard with two minutes left in the first half and did not return. Patterson said the junior from Little Rock, Arkansas tore an achilles and is out for the rest of the season.

“Injuries are part of the game,” Patterson said. “We expect Kennedi will return strong and ready to go in her senior season.”