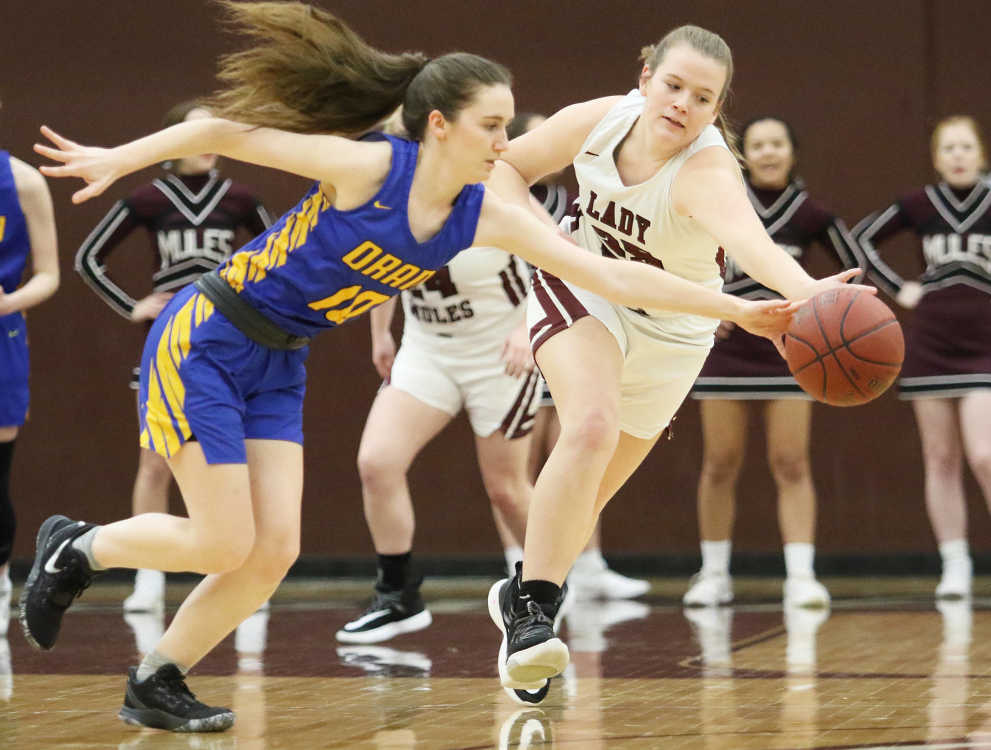 POPLAR BLUFF ŚĀBy the time Oran sank its second shot from the field, Poplar Bluff had already built a 22-point lead and there was just under three minutes left in the half.

The Mules forced 11 first-quarter turnovers to build a double-digit lead and knock off the state-ranked Eagles 56-37 on Senior Night.

All five Poplar Bluff seniors started together Ś Kiley Bess, Katie Pattillo, KeKe Hardaway, Hannah Bass and Abby Turner. They didn't give up a point for the first 3 minutes, 45 seconds.

"I just love every one of them," Bess said of her teammates.

Bess, who started the game with 2,107 career points, scored 12 of her game-high 28 in the opening quarter.

Bass sank three first-half 3-pointers for nine points while Pattillo also sank a 3 in the first half and finished with seven points.

Oran's Kaylee Payne scored all but two of her 16 points in the second half while Katie Webb had 10 points and six rebounds.

They could never overcome a 26-4 start by the Mules. Oran never got closer than 15.

"It's hard to win a game if you start the game that way," Pobst said. "At halftime I challenged the girls to forget the first half, come back and play hard the second half.

"I felt like we did exactly what we asked for, came back beat them in the second half."

Webb scored on a drive for Oran's first points but the Mules didn't allow a point over the next 6 minutes, 48 seconds.

Bess scored on a base-line drive, Emma Johnson got a steal and set up Bass for a 3-pointer for a 13-2 advantage. Bess knocked down shots on consecutive possessions for an 18-2 lead after one quarter.

Oran got a pair of foul shots to fall to end its scoring drought but Bess scored as she was fouled and Johnson came away with the missed free throw. Bass sank a 3-pointer for a 26-4 lead.

"I think we're just trusting each other, knowing that we're going to knock down the shot," Bess said. "(We have) five of them at a time on the court that can make a shot, we're going to swing the ball for the open shot."

Webb scored with 2:46 left in the half for Oran's second field goal then scored again in the post off a lob.

"This time of year this is the best game we could have asked for today," Pobst said. "Finding out what we need to do to improve for the next couple of weeks."

The teams split two meetings over the last two seasons with the home team winning each time.