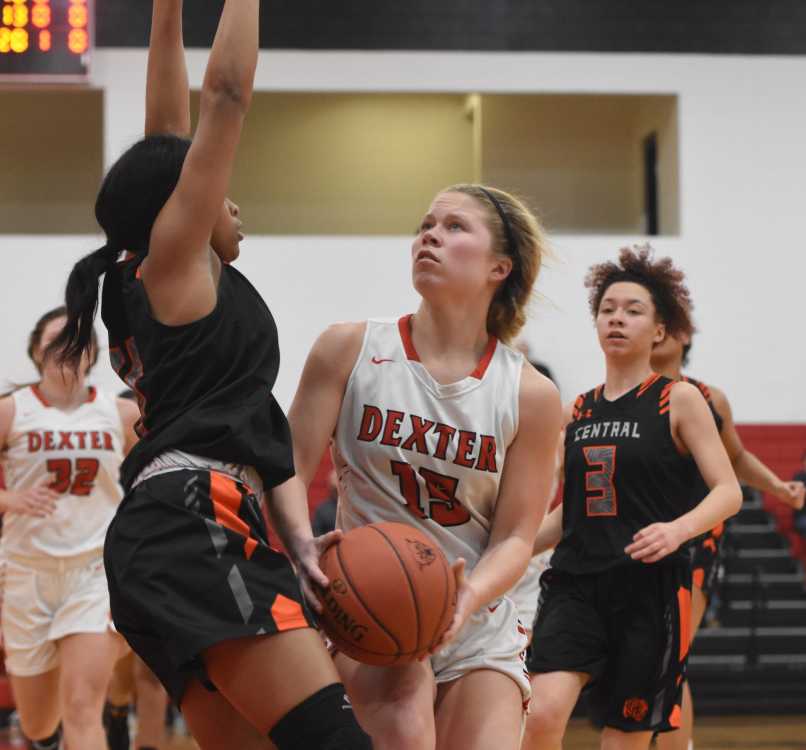 Dexter’s Magi McBride (15) drives to the basket where she is met by a Cape Central defender during the first quarter Thursday, Feb. 13, 2020, at the Bearcat Event Center in Dexter.
DEXTER STATESMAN/Kyle Smith
Order this photo

DEXTER — The Dexter Bearcats led for about only 90 seconds Thursday night.

However, those 90 seconds came at the end of the game, as the Bearcats rallied from 16 points down in the third quarter to beat Cape Central 53-49 in a SEMO Conference girls basketball matchup at the Bearcat Event Center.

Junior Sydney Asberry made a one-handed, off-balance shot from 15 feet out with a defender in her face to give the Bearcats a 49-47 lead with less than a minute remaining. 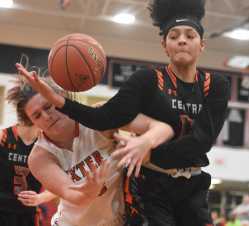 “It was a tough shot,” Asberry said. “I was thinking we’ve got to push. We’ve got to win this game. This is the game we have to win.”

“It was great getting that fourth win of the season,” Asberry said. “It’s been a rough season, so to get a win like this, it’s exciting.”

Senior Alexa Werneck paced the Bearcats with a game-high 19 points and Asberry finished with 11 despite missing parts of the final two quarters because of foul trouble.

Two of Dexter’s previous wins this season were blowouts, so Dexter coach Eric Sitze was pleased to see his team win a close one.

“I’ve seen it a few times. We’ve had a couple of away games that we competed well in and just didn’t finish,” Sitze said. “Tonight, I was glad for them. I’m just happy for them that they got to finish a game and see that excitement in the locker room and to know their hard work is starting to pay off a little bit.”

Cape Central (14-8, 2-4) had won five of its previous six games, including victories against New Madrid County Central and Kennett.

“We can be pretty good when we feel like playing,” Central coach Brandon Winters said. “Our kids kind of packed it in. They say, ‘I think this is good enough.’ They shut down their motors. We’re taking timeouts to try to run some set plays and do some different things and try to get them going again. The energy just wasn’t there.”

Caitlin Giles gave the Bearcats their first lead of the game (47-46) on a short pass by Dulcie Pullen in the fourth quarter where the Bearcats held a 28-12 scoring advantage.

Jackson made a foul shot with 54 seconds left to tie the score before Asberry’s game-winner.

“I’ve got hand it to Dexter,” Winters said “They beat us to every loose ball. They killed us on offensive rebounds for being a small team. They just wanted it more.”

Horton sank a long jumper to give the Tigers a 2-0 lead, and Vogel added five in the first quarter to give them an 11-9 lead entering the second.

The Bearcats tied the score at 6 when Magi McBride finished an inbounds pass from Asberry. Central extended the lead to 11-6, but Rachel Cobb scored on a putback and McBride made a free throw to slice Central’s lead to two.

Horton scored seven second-quarter points, and the Tigers began attacking the basket, finishing around the rim and getting to the free throw line where they went 4 for 4.

Werneck’s 3-pointer tied the score at 13 before the Tigers scored nine straight, including a layup by Emma Winkler following one of Dexter’s seven first-half turnovers.

The Bearcats cut the lead to five (22-17) on a driving layup by Werneck and two free throws by McBride.

Horton’s steal and assist led to a basket by Jackson, and Horton followed with a long jumper to push the lead to 26-17.

Werneck made a 3-pointer before the buzzer, and Central took a 26-20 lead into halftime.

The Tigers gained some separation at the start of the second half, opening the third with a 10-0 run to take a 36-20 lead.

“We struggled scoring the third quarter and we’ve had games like that,” Sitze said. “The girls have been in that situation a few times. We talked about it (Wednesday). If we get down, just stay with it, keep playing hard and stay positive.”

The Bearcats committed 10 turnovers in the third, but Central committed four late ones, giving them an opportunity to come back. They closed the quarter on a 5-1 run and trailed by only 12 entering the fourth.

Asberry made two free throws for the Bearcats’ first points of the third with 3:36 to play. Pullen scored on a feed by McBride, Werneck sank a free throw with 4.6 seconds left, and Central led 37-25.

“It was 47-31, I think, and we come down and miss four straight layups,” Winters said. “We gave up four points in the last 30 seconds of the third quarter. Then all of a sudden it’s a game again and our kids just laid down. Hats off to Dexter because they played hard the whole night. They believed and they got a win.”

In the fourth, the Bearcats cut their deficit to 10 (37-27) on a basket by Werneck and continued to chip away at the lead.

After Central extended its lead to 45-36 on a 3-point play by Rakiara Bogan, the Bearcats scored nine straight to tie the score. Werneck made a jumper in the lane, Karlee Keirsey converted two free throws, Werneck produced a 3-point play and Pullen came up with a steal and a layup to tie the score at 45 with less than three minutes to play.