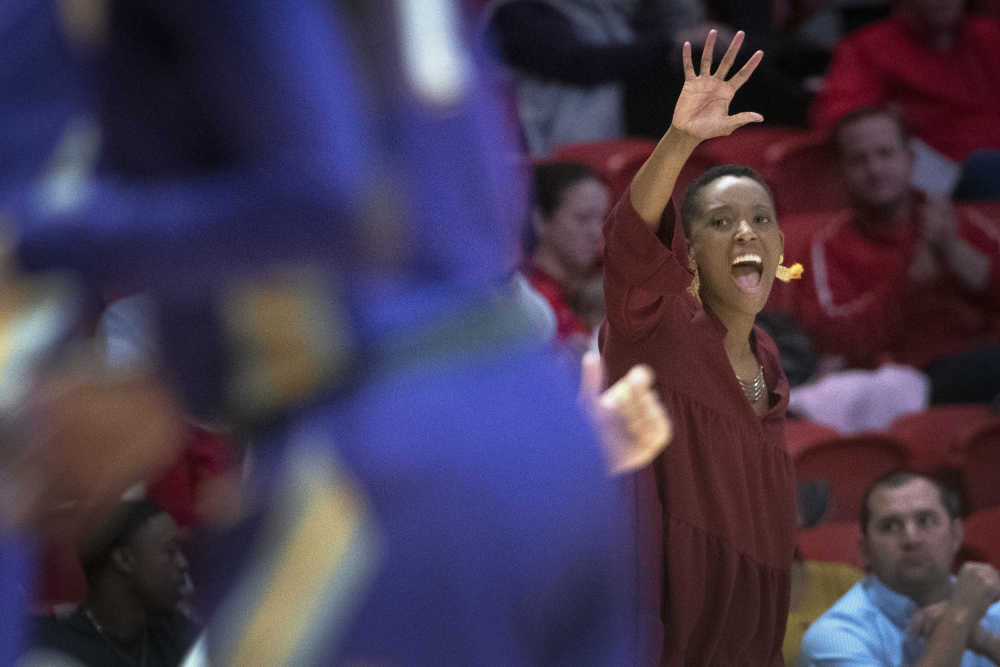 Southeast coach Rekha Patterson does all but sing the late Aretha Franklin’s signature song, “R-E-S-P-E-C-T,” in describing the record-setting leader of UT-Martin (15-8, 11-1 Ohio Valley Conference), Chelsey Perry. The Skyhawks and Redhawks tangle Thursday at the Show Me Center with first place in the OVC at stake.

“What (Perry) is doing in this league is phenomenal,” said Patterson.

“She’s leading the league in points per game,” added the fifth-year Southeast coach. “(Perry) put up 37 (a week ago) against Tennessee Tech and Tech was doubling her.”

In a 71-62 win over the Golden Eagles on Feb. 6, Perry was a workhorse, playing the entire game, all 40 minutes, a mark of unusual endurance in the OVC.

“She’s having an awesome year,” said Patterson, “and she’s only a junior.”

Perry, a 6-foot-2 forward, is one of two OVC semi-finalists for the Mid-Major Player of the Year award, along with Ellie Harmeyer of Belmont.

Perry, at this point in the season, has Patterson’s vote for OVC player of the year because the Middleton, Tn., native is as good a defender as she is a scorer.

“(Perry) is one of the top performers when it comes to blocked shots,” noting her OVC-leading 67 knockdowns on the season.

“I can put up my own players (for the award),” added Patterson, “but I’m not permitted to vote for them,” referring to certain nominees Carrie Shephard and Tesia Thompson.

Patterson, who turned 41 this week, is becoming known this season for her caution.

She does not engage in predictions and she refuses to brag.

In his 11 seasons at the helm, McMillan’s teams have posted six 20-win campaigns and four NCAA tournament appearances.

As Skyhawks coach, he is a three-time winner of OVC Coach of the Year, most recently in 2016.

A break from the grind

In the final push toward the OVC tourney, Patterson’s players enjoyed an excursion Monday at a creative studio in Cape – working with wood - to get their minds off the late-season pressure, at least temporarily.

“In this league,” said Patterson, “you go nine straight weeks without a break,” pointing out once the OVC schedule begins, there is no day off.

The 14 Redhawk women are becoming known for their closeness during a season which has seen Southeast leading the OVC in scoring at 74 points per game.

“We’ve played together so long,” said Thompson, Southeast’s scoring leader, “and we do things outside the gym to build our relationships.”

Fellow junior LaTrese Saine takes it a step further, referring to her teammates as “a sisterhood.”

“Our season-long (motto) is ‘extremely hard, extremely tough and together,” added Saine.

Denisha Gardener, a graduate student, grabbed 10 rebounds in the win over Tennessee Tech, earning the 6-foot-1 forward co-athlete of the week honors from Southeast athletics.

Gardener arrived for the contest later than the rest of the squad due to an all-day master’s level class in crisis intervention and consultation.

“Our players made sure Denisha got a pregame meal,” said Patterson, “and toasted her bagel the way she likes it and made sure the fruit she enjoys got on her plate.”

“These are the little things that matter,” added Patterson, “when your teammates show you there is nothing they won’t do for you.”

OVC Tourney in their sights

Patterson has made it a point in recent weeks to tell the media that she would prefer her Redhawks not peak prematurely as the OVC Tournament approaches March 4-7 in Evansville, Indiana.

Thompson suggests the best is yet to come.

“If we continue to play as we did (Saturday) against Tennessee Tech,” the Memphis, Tn., native said, “Man, watch out.”