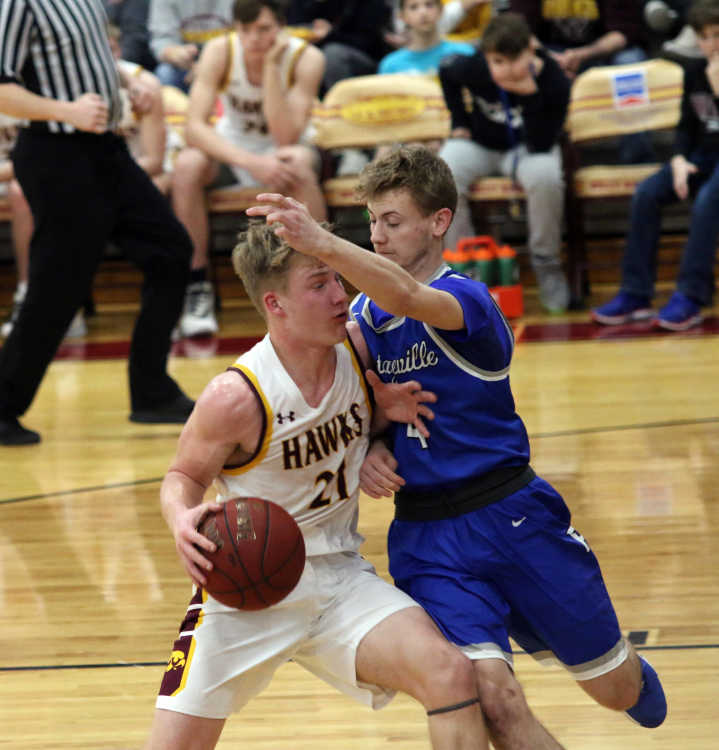 BENTON, Mo. Ś Clinging to a 43-41 lead with under one minute left, Kelly tried to stave off a Portageville comeback in the fourth quarter.

That would not be the case, though, as Portageville called a timeout with 58.9 seconds left, after junior Drew Irby drove near the right elbow, got pressured, and kicked it out to a teammate before head coach Jason Irby decided to try a new strategy.

Needing a timeout, the Bulldogs ended up getting just about what they wanted. Out of the timeout, Drew Irby attempted a tough fadeaway jumper that went off the mark. Junior Brendan Garmon, however, got into a good position to rebound the miss and turned that into a layup to tie the game with 30 seconds left in regulation, in the Bulldogs 50-48 loss at Thomas W. Kelly High School, on Tuesday night.

ōWe were trying to get Drew on a little isolation,ö Jason Irby said. ōThey started face guarding him some, so it was a little harder to get it to him. He did create space and got a shot, but we felt Ś either way Ś something good was going to happen.

ōThen, Brendan was able to get in on the glass. I thought Brendan was tremendous tonight. This was probably one of the best games heÆs played all year, which was nice to see.ö

With one last chance to win the game, the reigning Scott-Mississippi County Conference Tournament champions put it into the hands of junior Drew Dirnberger.

As time continued to go down, though, Dirnberger couldnÆt find any opportunities to make a play, forcing him to heave a last-second shot. His attempt missed, and Portageville gathered it to send the game into an extra four minutes.

ōGo out and do their job,ö said Johnson on his message to his team. ōDonÆt act like last week was luck. LetÆs act like we were the team we were supposed to be. And, just constantly remind them of the little things.ö

Kelly only scored two points in the fourth but made up for it in overtime.

Outscoring the Bulldogs 9-5 in overtime, sophomore Joel McClain started the extra frame off on the right foot.

Just 15 seconds into the period, McClain got free for a layup, giving the Hawks a 45-43 lead.

However, Portageville had an answer.

With 3:27 remaining, Drew Irby got into the lane and made a tough fadeaway jumper to tie the game at 45.

McClain then showed his aggressiveness again, with 2:57 left, after drawing a foul after a layup attempt. He went on to make both of his shots from the charity stripe, giving Kelly a slim, two-point lead, once again.

Then, with 51.2 seconds remaining, Portageville got in a situation to tie the game again.

Drew Irby drove into the lane, got his defender to bite on a pump fake, and drew the foul to head to the free-throw line. The Bulldogs, though, wound up coming up empty on the possession, as Irby missed both of his free-throw attempts, and Kelly came down with the rebound.

That then translated into sophomore Gavin Jansen doing the same thing that Portageville did. He got into the lane, got his defender to bite on a pump fake, and converted his layup Ś and ensuing shot from the charity stripe Ś for a successful and-one that put the Hawks up 50-45, with 39.9 seconds left.

Still fighting back, Portageville managed to cut the lead to the final total, 50-48 after sophomore Kelan Bills hit a three-pointer from the top of the arc.

In the end, one thing that Johnson pinpointed as an area they struggled in was rebounding. Portageville out-rebounded Kelly 25-22.

ōWe didnÆt rebound the way we should rebound,ö Johnson said. ōThey were physical. They were pushing us underneath the basket, and we were getting too deep underneath there. Portageville did a good job of moving us with their strength and everything. We didnÆt have our knees bent so that we couldnÆt counteract that. In times, when we did do it, we got the rebound, and when we didnÆt do it, Portageville ended up with the rebound.ö

Garmon led the Bulldogs with 10 rebounds, which made his head coach happy to see.

ōWeÆve been trying to preach that to him,ö said Jason Irby on Garmon being aggressive. ōSometimes he doesnÆt play athletic, but tonight we kept pounding away at them. He just played like an athlete, made a lot of great plays, and I thought he was big for us, matching up with their big kid.ö

Bills added 11 points, on 4 of 6 shooting, and grabbed seven rebounds.

Bryce Morgan led Kelly with 16 points. He shot 6 of 13 from the floor, and 3 of 6 from three, while grabbing three rebounds and dishing out four assists. McClain added 14 points, on 5 of 7 shooting, and five rebounds. 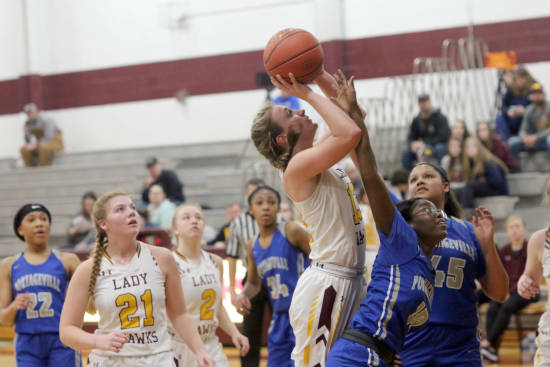 Moore finished with another double-double, scoring 34 points, and grabbing 16 rebounds, in the Lady Hawks 62-48 win over the Lady Bulldogs.

Garielle Madison had 26 points for Portageville.