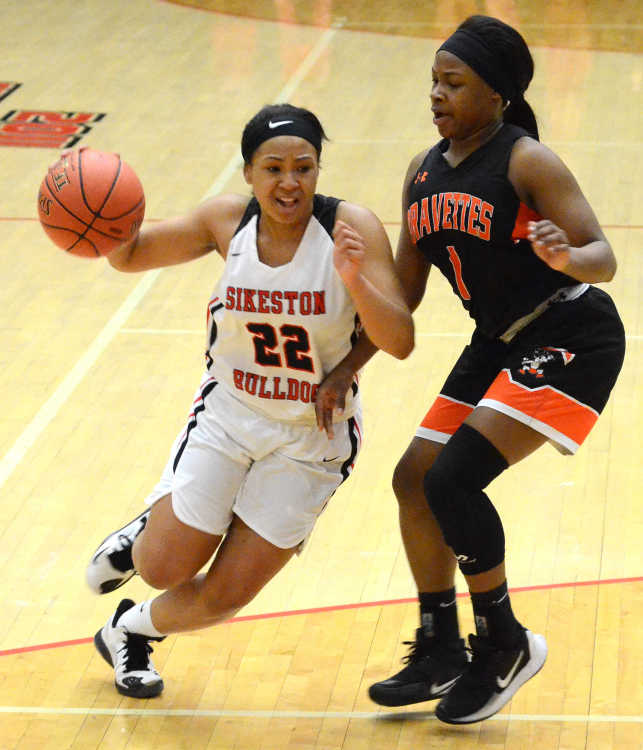 SIKESTON, MO – Despite a strong push by visiting Scott County Central anytime they tried to pull away, the Sikeston Lady Bulldogs kept to their winning ways on Tuesday.

Buoyed by a strong fourth quarter, the Lady Bulldogs downed the Bravettes 55-42 for their second win in as many days and extended their winning streak to six games.

“It was rough because last night against Ellington was such a physical game for us,” Sikeston head coach Alisha Wills said. “The momentum from the very beginning was intense. The pace of the game was quick. We came out tonight and were flat. We started slow and until the fourth quarter never really found our groove.

“I think we’re at the point now they know what it takes to play four quarters, but they let Scott Central slow them down and take them out of their game.”

In each of the final three quarters, the Bravettes strung together runs to make sure the Lady Bulldogs never pulled away.

A rally of 10-straight points in the second quarter gave Scott Central their biggest lead of the night, 21-17, erasing a six-point deficit and forcing Sikeston into a timeout.

Regrouping, the Lady Bulldogs (12-9) went into halftime with a slim 25-24 edge, and a couple of minutes into the third quarter extended their lead to seven points, 33-26.

Another Scott Central (15-4) run knotted things up ay 33-33 with 2:36 left in the quarter, but a 7-2 Sikeston run to end the quarter left the Bulldogs out front by two possessions entering the fourth.

A 6-2 Bravette run to start the fourth again had Scott Central within a possession, 42-41, with 4:18 to play, only to see Sikeston seize momentum and never look back.

Back-to-back baskets from Karris Allen gave the Lady Bulldogs some breathing room, and a turnover by Scott Central made it six-straight Sikeston points after an Amyari Blissett steal and shot from the paint.

Two more buckets from Allen put the finishing touches on a 12-0 run the effectively iced the game.

“It was a steal and a break-away,” Wills said of her team’s late run. “Those two things happen to be the momentum changers for us. Their whole demeanor changed. Everything changed with them when we got a couple of those.

“We had a hard time just getting the ball in the basket tonight. Several times it rattled around and wouldn’t go, but we battled for boards and put-backs.”

Taydrianna Barnett led all comers on the night, scoring 22 points for the Lady Bulldogs, including 15 points in the first half alone.

Allen finished with 16 points, scoring eight of those in the fourth.

For the Bravettes, Samantha Coffee’s 18 points led the way while Micah Adams finished with 14 points.

“We made a couple of mistakes here and there,” Scott Central head coach Andrew Pullen said. We got a little lazy with the ball, but my girls our fighters. They fight until the end and do what I ask them. Just a few things here and there, and it’s a different game.