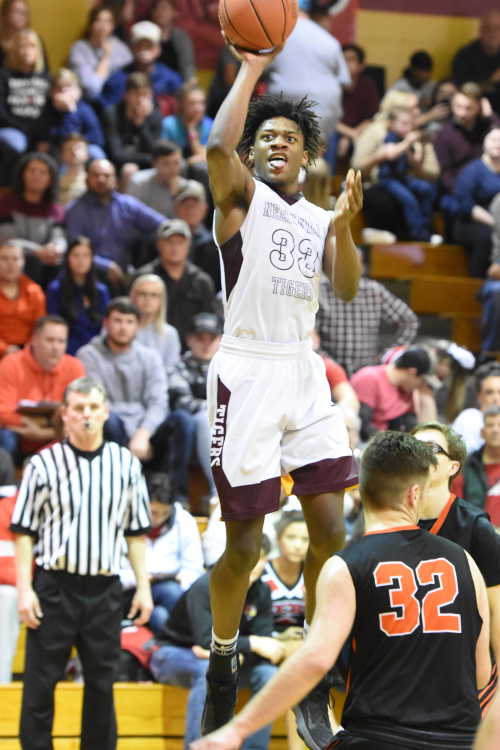 NEELYVILLE - At one point in the fourth quarter, Neelyville's Curtis Fowler was standing on the wing. Neelyville attempted a 3 and Fowler ran in for the rebound. The missed 3 bounced straight up. Without breaking stride, Fowler leapt high above the rim, grabbed the rebound with one hand and threw it down for the dunk.

He was the only player on the court physically capable of doing that.

Fowler finished with 23 points, including 11 in the first quarter, as top-seeded Neelyville beat Clearwater 65-46 in the Ozark Foothills Conference Tournament semifinals.

"Tonight, he showed why he is a special player," Clearwater coach Zac Moore said. "He is the best athlete and probably the best player we have in our conference. Someone who is 6-5 that can jump out of the gym like that and just play at a high level, it is a tough matchup for anybody."

It's the second year in a row that Neelyville has reached the finals, which is scheduled for 8:30 p.m. Friday at the Libla Family Sports Complex, as the top seed, but last year they were upset by Twin Rivers. Neelyville will face East Carter, which beat Doniphan in the other semifinal, for the third time this season. The Redbirds won 66-34 in the Clarkton Christmas Tournament finals and lost at Neelyville 51-47 on Jan. 28.

In the first quarter, Fowler drew two charges and Neelyville drew four charges as a team as it allowed 12 points.

"There's one thing I can say about our kids in this game, I was very proud of our effort when it came to taking charges," Morton said. "It played into our hands big in that first half. It got some of their guys into foul trouble, which helped us out, put us in the bonus."

Added Clearwater coach Zac Moore, "We're an aggressive team. We want to attack when we can. Curtis did a great job of taking charges against our guys. I think that kind of intimidated us from attacking."

Fifth-seeded Clearwater, which held Fowler to six points in January, was tied at 10 midway through the first quarter, but then its offense went cold. It scored two points during a 6-minute stretch and Neelyville went from being tied to being up by 14, and it would keep a double-digit lead the rest of the game. In that 6-minute span, Fowler earned eight of Neelyville's 16 points.

"I think we got a little undisciplined for a lot of that game," Morton said. "For that stretch we were really able to control the game defensively. We settled down a little bit."

Jemanne Williams kicked off the run with a putback, Fowler scored, and Williams scored again off a turnover, leading to a Clearwater timeout.

"We just couldn't find the hole I guess," Moore said. "Neelyville did a tremendous job of putting pressure on us, turning the ball over, that leads to transition points for them. They got that halftime lead and we just never recovered from it."

After Taylor Hicks, who finished with 21 points, scored for Clearwater, Fowler made a 3 and closed the first quarter with a free throw, putting Neelyville ahead by eight at the buzzer.

Fowler scored again to start the second, Austin Ennis made a 3 and Williams added a free throw to cap the run with just under 6 minutes left in the half. Williams would finish with 12 points.

Neelyville's lead hovered around 15 points for the rest of the second and then the third quarter before rising to more than 20 during stretches in the fourth.

Gage Keller had 11 points for Clearwater.

"Curtis always plays hard. You can never really question his effort," Morton said. "He's so tall and long and he can jump. His shots were falling and when he has that touch around the rim, he can score for us."