Nobody does it better - legendary "keeper" enters Southeast Athletics HOF 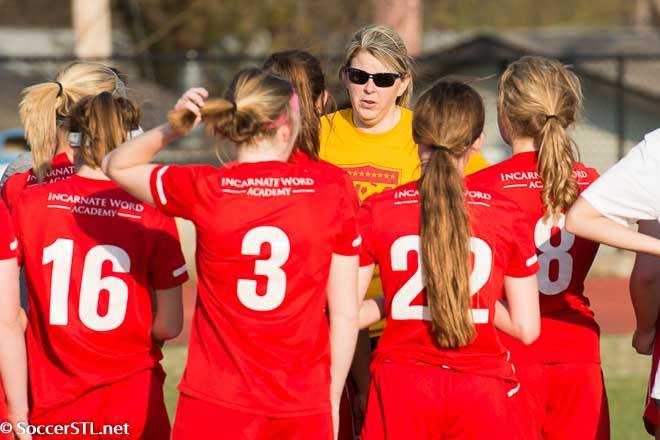 Beth Guccione Sims has stood in a soccer goal crease many times in her life.

When an opponent came down the pitch in a breakaway with only Sims standing between the ball and a score, the St. Louis County native claimed never to feel terror.

“Oh, no, it was (always) an adrenaline rush,” said Sims. “My job, the one my teammates depended on me to do, was keep the ball out of the net.”

Few did it better than Sims, who recorded 13 shutouts in 18 games for Southeast Missouri State her senior season, and who was named Ohio Valley Conference Player of the Year.

The achievement is more remarkable given 2001 was only Southeast’s third year of women’s soccer.

Sims, whose teammates called her “Gooch,” as a diminutive of her then-maiden name, co-captained a team that captured the regular-season OVC title with a 16-2 record.

“I never expected this,” said Sims, who was already a member of the Lewis and Clark Community College Hall of Fame for her soccer exploits in Godfrey, Il., before coming to Southeast.

“I only played two years at SEMO and didn’t think I had (HOF) stats,” Sims said.

“Also, we didn’t win the OVC tournament in my time there."

During her days as an undergraduate, the team was known as the Otahkians. The Southeast men were called Indians.

Sims’ days came and went before the university switched to the moniker “Redhawks” in 2005.

The Florissant, Mo., native initially had no intention of coming to Cape Girardeau.

“I didn’t want to go to Southeast,” Sims said. “It was a brand-new program, but my mother said I had to talk to the coach, so I did.”

At the time, Sims was also being recruited by Oklahoma State, SIU-Edwardsville, Mizzou, University of Dayton, Missouri State and McKendree College.

After a 45-minute conversation with Southeast’s coach, Heather Nelson, Sims informed her mother that she was going to Southeast after all.

“(Nelson) talked about the family atmosphere she wanted to create,” explained Sims, “and about the character of the players she was recruiting – and that sold me on (Nelson) and the school.”

Sims was part of the inaugural season – 1999 – for women’s soccer at Southeast.

After graduation in 2002, Sims joined Nelson’s coaching staff as an assistant for four seasons.

Sims had begun to do informal academic advising of soccer players while serving as Nelson’s assistant.

She enjoyed the work and left Southeast for a stint at Concordia University in advising, later joining Webster University.

She remains at Webster today, serving in an administrative capacity.

Sims missed coaching and the sport which brought her so many accolades.

Under her leadership, Incarnate Word went to the final four three out of her five seasons at the helm.

“I could see myself coaching again,” Sims said, “but it needs to be the right situation.”

As for what makes a good soccer goalie, the mother of two says it’s important to be calm and positive.

“Also, to be successful, you have to have a short memory (to be goalie),” explained Sims. “The other players feed off your confidence so if you had a bad game, if you gave up goals, you have to let it go.

“I could see the whole field as a keeper and my teammates were counting on me.”

The recent move of student-athletes to concentrate on only one sport in high school is, for Sims, a real mistake.

“I played three sports at Incarnate Word – soccer, softball and basketball,” said Sims. “It does drive me a little crazy to see teenagers specialize. When you diversify and play a number of things, you don’t overuse certain muscles.

“Besides, it’s a good thing to be coached by different people.”

The former FIFA World Player of the Year played basketball, in addition to soccer, while growing up in Rochester, New York.

Sims married her husband, Shaun, an employee of Wells Fargo, in 2014.

Sims is the only soccer-only athlete in Southeast history to join the school’s hall of fame.