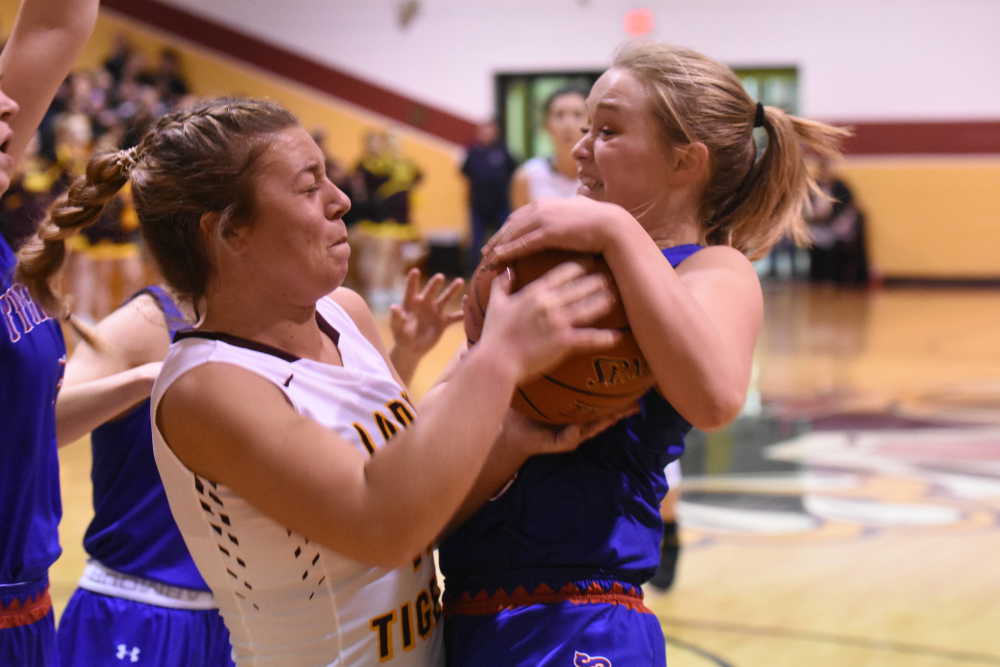 NEELYVILLE - The 11-time defending champions had to fight off a tough Twin Rivers team just to return to the finals.

Neelyville, playing without senior guard Lexi Liau who was out with an injury, was able to turn things around in the second half and went on to beat Twin Rivers 66-42 in the Ozark Foothills Conference Tournament semifinals.

The top-seeded Tigers (18-4), who scored 30 points in the first quarter against Twin Rivers a week ago, were down by two at halftime after scoring 20 total points.

Neelyville then came out in the third quarter and took control of the game with a 14-3 run over the first 4 minutes, taking a nine-point lead and then pushed that to as much as 24 points in the fourth quarter.

Makenzi Davis and Bailey McGruder each had 20 points for the Tigers. Davis got 13 in the second half while McGruder had 14.

Payton Reinbott added 11 points after going 7 for 9 on free throws.

Taylor Watson led the Royals with 14 points after making three 3-pointers and Abbey Hester got 11 points.

"I'm proud of them. I told them, we're not walking out of there with our heads down. We're going to keep our heads up because we worked our tails off," Twin Rivers coach David Crockett said. "We lost focus and it doesn't take long. When you get down and you are battling out of a hole, it is hard to do."

The Royals (12-12) established themselves as a tough challenge early after opening the game with a 3-pointer and a three-point play to take the early lead.

Neelyville didn't earn its first lead of the game until Davis scored the final basket of the first quarter to put the Tigers ahead 12-10.

There were another four ties and three lead changes in a back and forth second quarter. The Royals forced the last lead change of the half after Madyson Foust finished a layup to tie the game with 1 1/2 minutes left on the clock, and then Jaylynn Williams got a steal and another layup 15 seconds later.

Davis scored for the Tigers to tie it up again, but Drew Love sank a long jumper to give the Royals the lead at the break.

"As far as effort, we are there. It is execution," Crockett said. "If I could bottle that first half up, I'd take it every game. Second half, not so much.

"In the first half, we executed offensively. Defensively, we blocked out, we took care of the basketball. Second half we got sloppy with the basketball. They went to the boards harder, they drove more," Crockett continued. "They put so much pressure on you mentally and physically. We put the pressure on ourselves more when they made that run instead of staying relaxed like we did in the first half."