SENIOR NIGHT SUCCESS: Sikeston pulls away late against Ellington, as Barnett gets honored for senior night 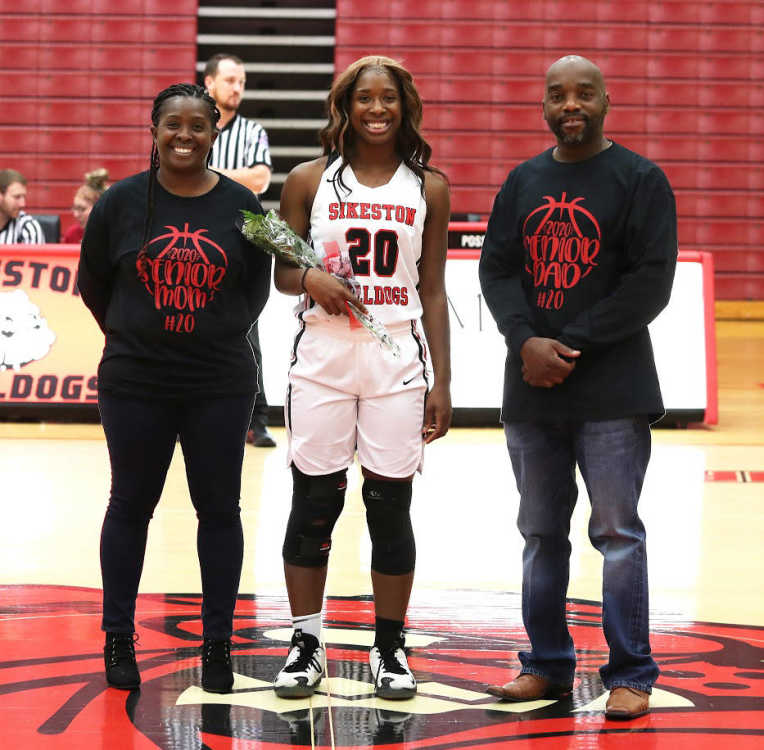 Sikeston's Taydrianna Barnett gets honored before the Ellington game, on Monday, Feb. 10, 2020, at the Sikeston Field House.
Liza King/Standard Democrat

SIKESTON — Time is winding down for Sikeston senior Taydrianna Barnett on the basketball court.

On Monday night, against Ellington, Barnett was honored by her teammates and coaching staff for senior night at the Field House.

A prolific scorer, Barnett led the Lady Bulldogs to their fifth-straight win, defeating the Lady Whippets 71-63.

Fittingly, Barnett led the way with a game-high 27 points. She shot 9 of 23 from the floor and grabbed seven rebounds as well.

Additionally, Barnett also did most of her work during crunch-time.

With the game tied at 49 entering the fourth quarter, Barnett made sure not to end one of her final games at Sikeston on a sour note — the Lady Bulldogs still have two home games remaining on the schedule. She scored 16 points in the final frame, including going 6 of 8 at the charity stripe as well.

Always in attack-mode, Barnett said that what she liked most about her performance was how she was able to penetrate and get high-percentage shots.

“I drove the ball in a couple of times, and that’s my aggressive spot,” Barnett said. “That’s where I like to play the most, and I’m more aggressive in-the-paint than I am shooting threes.”

Leading 37-33 at halftime, Ellington came out of the break on a strong note.

With 5:36 left in the period, freshman Kaylee King hit a pull-up jumper from the free-throw line to cut the Lady Bulldogs lead to one, at 40-39.

Then after an offensive foul on Sikeston, King would give the Lady Whippets a 42-40 lead after hitting a three-pointer from the right-wing.

King’s go-ahead basket in the third started a short string of lead changes between both teams.

After sophomore Karris Allen made one-of-her-two attempts at the foul line, and Ellington came up empty on the other end, Sikeston regained the lead thanks to a Barnett layup.

The Lady Whippets would then regain their second lead of the period, at 44-43, before sophomore Amyari Blissett hit two free-throws to push the Lady Bulldogs back in front, with 3:08 left.

Allen then split a pair of free-throws, again, to push the Sikeston lead to two, before King knotted the contest up, on an uncontested layup with 1:48 left.

Then, just 18 seconds later, Sikeston took another lead, as Allen hit a three from the right corner to make it a 49-46 game.

As time was winding down, Ellington provided the final points of the frame. Sophomore Laura Gore hit a three-pointer herself, from the left-corner, that tied the game once again and ended — what was — a wild start to the second half.

Heading into the final period, Sikeston used it’s athleticism and quickness to pull away.

Leading 51-49, the Lady Bulldogs made it a four-point game, after creating a turnover and pushed the ball ahead to Barnett for a driving layup, to make it 53-49 with 7:05 left.

On the next possession, though, Ellington responded. Sophomore Gretchen Hackworth scored while drawing the foul. She went on to make her foul shot, for a successful and-one, and make it a one-point game with 6:52 remaining.

Freshman Kirsten Fairhurst — who has earned substantial playing time in recent games — proved why, after Barnett missed a shot, and Fairhurst was in position to fight for a rebound. After collecting it, she then dished it off to Barnett for a layup to put the Lady Bulldogs ahead by three, 55-52, with 6:25 left.

When Fairhurst gets listed in the scorebook after the game, points usually don’t come next to her name. Her role on the team goes beyond key stats, as she does certain things that don’t appear in a box score.

“She reminds me of a player that we had a few years ago,” Sikeston head coach Alisha Wills said. “Somehow, the smallest player — when they have that kind of speed — that small player can find their way in and people don’t even realize that they’re underneath her. She found little holes to get into; she came down with rebounds against the tallest girl on their team.

“I’ve called her a “spark plug,” and she was that tonight. She showed that she belongs at the varsity level.”

Getting outscored 22-16 in the fourth quarter, Ellington head coach Paula King said that her team wasn’t themselves offensively.

She added that defensively, it wasn’t much better.

“The second half, defensively, we allowed way too many points,” King said. “Especially in that fourth quarter, where we allowed 22 points — that’s not normally like us. So, that was definitely where we fell short.”

King led the Lady Whippets with 22 points. She shot 7 of 22 from the floor and was cold from the three-point line, where she shot 2 of 8.

Senior Gracie Price had 17 points on 4 of 12 shooting, while sophomore Tyler Conkright had 11 points and seven rebounds.

Allen finished with 22 points for the Lady Bulldogs. She shot 7 of 11 from the field and grabbed eight rebounds.

Blissett finished with 16 points, on 9 of 17 shooting as well.