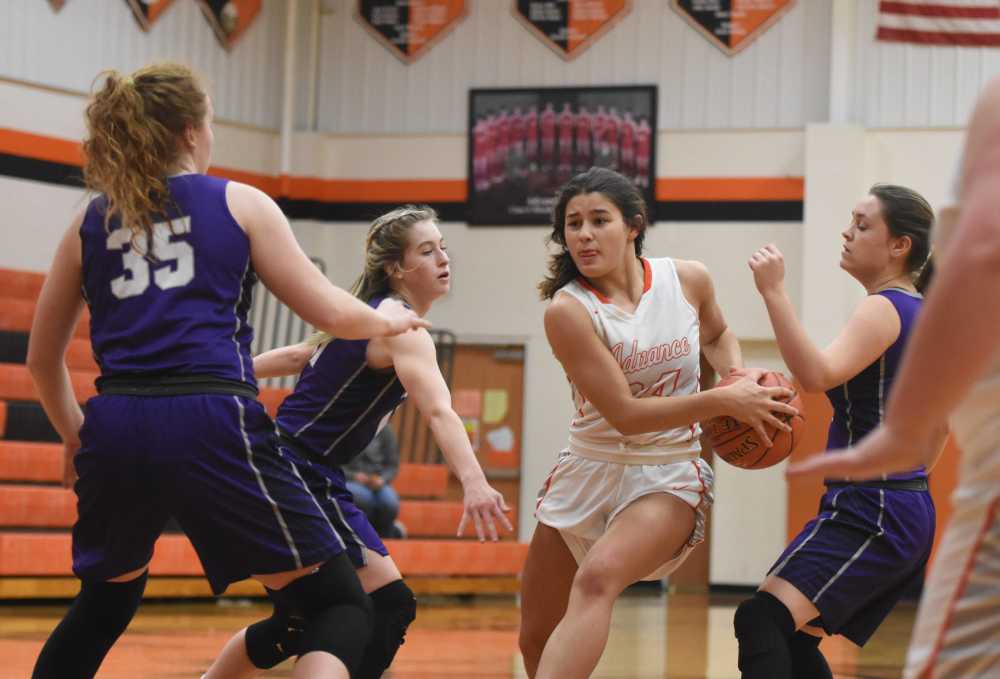 Advance's Alandry Below (second from right) drives to the basket against Holcomb during the first half Monday night at Advance High School.
DEXTER STATESMAN/Kyle Smit
Order this photo

ADVANCE — Things are trending up for the Holcomb girls basketball team in its young rivalry with the Advance Hornets.

After losing the first two games between the two third-year programs, Holcomb has won three straight after a 56-30 victory Monday night at Advance High School.

Holcomb overcame a slow start to overtake Advance by halftime and pull away in the second half to improve to a program-best 14-7. 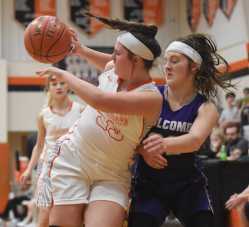 Advance's Molly Freed (left) passes to a teammate under pressure from Holcomb's Allison Moody during the first half Monday night at Advance High School.
DEXTER STATESMAN/Kyle Smith
Order this photo

“Halftime speech was a little bit of an attitude adjustment,” Holcomb coach Alexa Stockton said. “Get the lead out and get up and get after them. That’s what our main thing was coming into the second half. … Try to get them to turn the ball over and try to get quick layups, and that’s what we did.”

Advance committed 16 turnovers in the second half and 30 overall.

“We came out and played two good quarters,” said Advance coach Ethan Barr, whose team led 10-6 after one quarter and trailed 21-18 at intermission. “We wanted to get off to a good start because last time we played them we got off to a rough start. At halftime, they came out with more intensity and we didn’t respond to it. We let the game get away a little bit.”

Holcomb beat Advance 61-32 in the semifinals of the Bloomfield Invitational in December.

Holcomb held Advance’s leading scorer, Alandry Below, to 15 points, 10 under her season average.

“She rolled her ankle in warmups, which isn’t a good way to start,” Barr said, “but she played the whole game. She toughed it out. Obviously, they made it tough on her. They did a box-and-one on her. She’s got to score for us to have any chance.”

Advance, who fell to 12-9, never trailed in the first quarter. Below drove the lane, drew a foul, made her basket and converted her free throw for a 3-0 lead after 2 minutes, 22 seconds of scoreless basketball.

Holcomb sliced the lead to one on a steal and layup by Macy Houart and a long jumper by Alyssa Brown.

Molly Freed and Below combined to go 3 for 4 from the free throw line, and Advance took a four-point lead into the second quarter.

“Advance’s defense, they rebounded the ball well,” Stockton said. “They’ve got good players who took it to the hole. We just didn’t take it to the hole and they were doing what they had to do to get on the line and shoot free throws. They outplayed us.”

Holcomb went 0 for 7 from 3-point range in the first quarter but didn’t attempt one in the second when it took the lead for the first time.

“At the beginning of the game, we’re really bad about just relying on our outside shot,” Stockton said. “We do have some girls who can shoot. It takes us a little bit to get warmed up. We don’t realize that a lot of the time. Then we start getting ourselves in a hole and we have to climb out, climb out, climb out. We hate playing that climb-back game, but we had to after the first quarter.”

Advance maintained the lead until Bailey Cupples made a free throw with 2:52 left to tie the score at 16. Houart converted an Advance turnover into a layup to give Holcomb its first lead, 18-16.

Below scored on an inbounds pass from Ashtin Fowler to tie the score at 18, but Cupples went 3 for 4 from the foul stripe in the final 19.4 seconds to give Holcomb a 21-18 halftime lead.

Holcomb outscored Advance 21-5 in the third quarter, holding Below to only two points.

“That’s who we prepared for obviously,” Stockton said of limiting Below. “She’s a great player. She’s a great athlete. … She gets to the hole well. She rebounds well and she finishes at the line extremely well. We wanted to limit her points because we knew she was going to get some. If we limited her, we thought we had a decent chance.”

Cupples scored 12 of her game-high 18 points in the second half.

Holcomb came within two points of a 30-point lead (55-27) that would have triggered the running clock, but Advance scored five of the game’s final seven points.