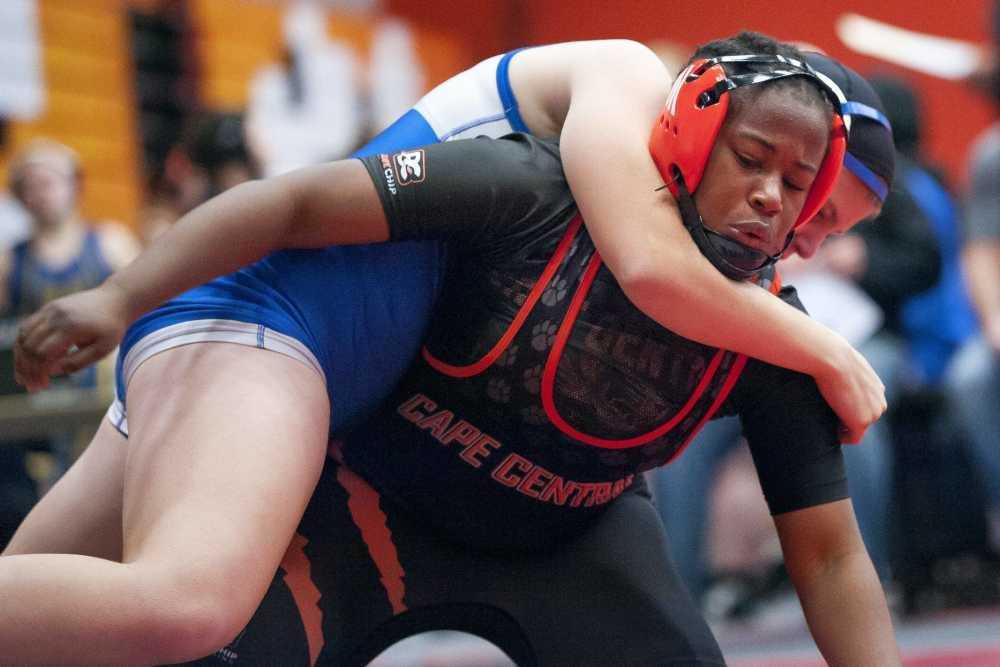 Cape Central's Tambria Wilson, in black and orange singlet, competes in a tournament in Central's "Jungle" gym on December 30, 2019. Wilson was among a quintet of Tigers wrestlers to compete Friday and Saturday in the Class 1 District 1 tournament in Hillsboro, Mo.
Tyler Graef ~ tgraef@semissourian.com

La’Niaa Brown of Cape Girardeau Central has notched her place in the sporting annals of the Tigers. Brown, a freshman, has become the first girls wrestler in school history to be a state qualifier.

Brown, a freshman, posted an 11-3 record for Central – best on the team – and finished as runner-up in the Class 1 District 1 tournament held Friday and Saturday at Hillsboro High School.

How the state tourney works

The top four finishers in each of the 12 weight classes qualify to grapple for an individual championship at the state tourney Feb. 20-22 at Mizzou Area in Columbia, Mo.

Brown, in finishing second at 142 lbs., is among a small cadre of local wrestlers heading to Columbia.

“I am so impressed with (La’Niaa),” said Cape Central wrestling coach Aaron Ross. “She came into the room with a mission and it showed this weekend.”

“(La’Niaa) has been wrestling since the seventh grade and has been a great asset,” Ross continued.

This is the second full year that Missouri has operated high school wrestling as a sex-separated sport.

In Ross’ first 10 years coaching at Central, boys and girls wrestled together in competition – as was the case all over the Show Me State.

Central effectively had one girl in the sport in the first year of segregated competition but took five to this year’s 2020 district tournament. In addition to Brown, freshman Kaylee Armstrong (4-9 record) competed in the lightest weight class, 103; sophomore Tambria Wilson (7-12), who also plays Tigers varsity football, wrestles 152; sophomore Dymon Taylor (14-10) is in the 187-lb. class; and freshman Mackenzie Thomas (9-10) competes at 235.

Ross is aware that his small squad competed in less than half of available weight classes this season.

“I hope (La’Niaa’s) success is a catapult for growth of this sport in Cape,” said Ross, “and that we can take a full girls team (to state) next year.”

“(The girls) are warriors,” he added.

48 teams were invited to Hillsboro and the order of finish for area high school is as follows: