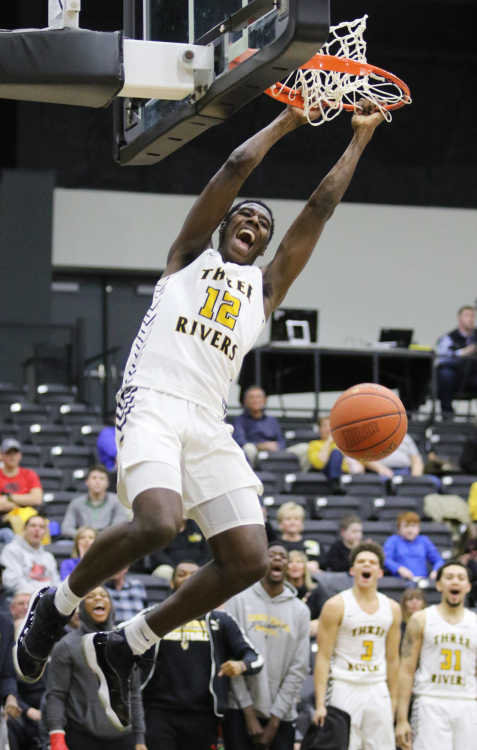 POPLAR BLUFF — With their leading rebounder on crutches, the Three Rivers men's basketball team didn't allow a second-chance point during the first half Saturday night.

The Raiders built a double-digit lead by not allowing a field goal over eight minutes late in the first half and rolled to a 97-82 win over MSU-West Plains at the Libla Family Sports Complex.

"We played at another level on the defensive end of the court."

The Grizzlies shot 37% from the field and turned it over 24 times, scoring 34 of their points from the foul line.

Three Rivers (16-10, 3-4 Region XVI) had six players reach double figures in scoring led by 17 points from Brahm Harris and 16 each from Tallon Fonda and Dionte Raines, who sank 4 of 6 shots from 3-point range.

The Raiders shot 56% from the field and had just three fewer rebounds than the Grizzlies (9-18, 1-4) with their leading rebounder out. 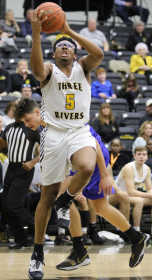 Lydell Geffrard suffered an ankle injury late in the Raiders' previous game and did not dress Saturday. The 6-foot-8 redshirt sophomore who leads the team in rebounding at 6.5 per game and is second in scoring at 9.8 points, did not dress and was on crutches. In both of the previous meetings with the Grizzlies he had 11 rebounds as the Raiders won by four and six points.

"Lydell is a big part of our team," said freshman Dominique Hardimon, who had 15 points, six assists and four steals.

"We just want to keep working and build on that (win) and keep our energy level up."

Austin Parker, who scored 11 points, was a rebound shy of a double-double while Harris had seven rebounds, both coming off the bench.

Jay Hines added 12 points on 5 of 6 shooting from the field while Parker sank 5 of 9 shot, had three assists and four steals.

"Both of them were playing pretty good down late last year," Bess said of Parker and Hines. "And we need them playing at their best if we're going to get something done this year."

Parker scored twice in the post, set up a layup with a pass, drew a charge and stole a pass during the Raiders' charge to end the first half.

Three Rivers forced turnovers on six consecutive possessions after breaking a 21-all tie with 7 minutes left in the half when Raines sank a 3-pointer.

Hardimon scored after a steal by Jacob Shoemaker, Fonda scored off Parker's pass and Parker capped an 11-0 run. Harris later scored on consecutive possessions for a 36-22 lead as the Grizzlies got a free throw, ending a 4-minute, 49-second scoreless drought.

A 3-pointer with 38 seconds left in the half was the first field goal by the Grizzlies in eight minutes.

"We just kept the energy up on the court," Hardimon said of the 17-6 run to end the half.

The Grizzlies got their first second-chance point 2 1/2 minutes into the second half to get within nine but missed a chance to get closer.

Fonda scored off a pass from Hardimon and Rains splashed in a wide-open 3. The Raiders later put together a 10-3 run that ended with steal by Hayden Sprenkel who threw a bounce-pass sitting on the court to Fonda for a breakaway dunk.

"I think that's typical raider basketball," Bess said of the win. "I like the way we played for at least 30 minutes of that 40, but West Plains is a good basketball team, well coached and a ot of tradition going for them. They're not going to go down easy and they showed that the second half here." 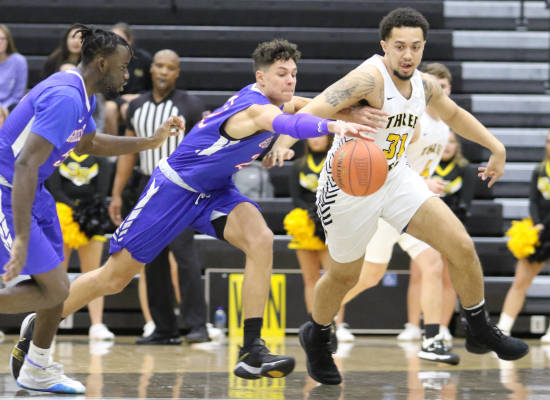