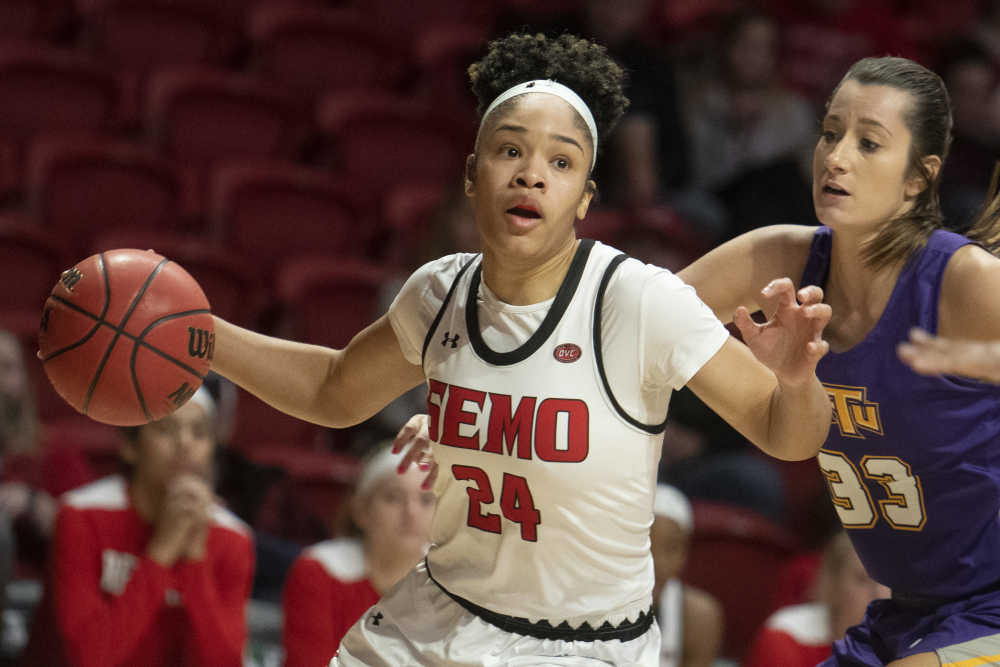 Southeast Missouri women scored a double-digit win Saturday over Tennessee Tech at the Show Me Center, thanks in part to a scoring performance from Tesia Thompson.

Thompson, the junior from Memphis, Tn., led all scorers with 28.

"It feels surreal," added Thompson, when asked about the Redhawks recent dominance of Ohio Valley Conference rival and their impressive late season record.

Carrie Shepherd, the redshirt senior from South Pemiscot High in Steele, Mo., had 18 including two 3-pointers - both of which she hit in the first quarter. She was 0-for-10 from three-point land thereafter.

"Carrie leads us in ways other than scoring," said Redhawks fifth-year coach Rehka Patterson. "She led us in steals (5), came up with two turnovers, had four assists and was perfect (4-4) from the foul line."

Southeast put four players in double figures - Thompson, Shephard, Pruitt - who had 11 - and LaTrese Saine, who came off the bench for 10 points and six rebounds in 17 minutes of game action.

The 6-foot-4 Saine was hit hard on the head in the second half but failed to draw a foul.

"I think it's harder for a referee to call fouls on bigger players (like me)," said Saine, a redshirt junior from West Memphis, Ark.

"Referees seem to think the taller (ones) can take it," added Patterson, "and LaTrese doesn't seem to get those calls."

Tennessee Tech hit 12 3s but failed on 14 more attempts as the Golden Eagles became dependent on hitting treys due to a stout Redhawk defense in the paint.

"Coach P tells us that if we're the tougher team, we'll win," said Thompson, who continued her excellent performance from the charity stripe, going 6-of-8. "Today, we were."

The OVC Tournament will be held March 4-7 in Evansville, Indiana.

The top eight teams participate and the Redhawks are currently ranked second.

In the preseason, Southeast was picked for finish sixth.