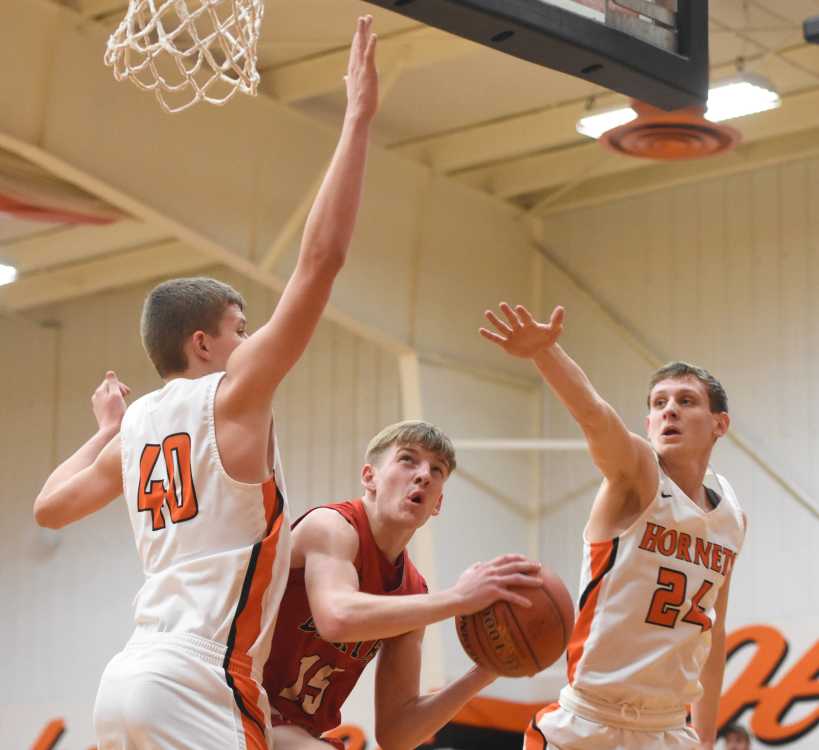 Dexter's Peyton Driskill (middle) tries to get a good look at the basket against Advance's Jaren Schrader (left) and Jack Below during the second quarter Friday night at Advance High School.
DEXTER STATESMAN/Kyle Smith

ADVANCE — Landon Dailey controlled the paint and Hunter Curtis made some key 3-pointers, leading the Advance boys basketball team to a 69-64 victory over Dexter on Friday night at Advance High School.

“Overall, I thought we did really well,” Advance coach Bubba Wheetley said. “Finally, I’ve had a couple of kids step up. I’ve been waiting for it to happen. Landon played his best game of the year. He was aggressive. … You could see it on his face. He wanted to take over.

Dailey finished with 20 points with most of them coming in the paint, and Curtis scored 17, including five 3-pointers.

“He can shoot,” Wheetley said of Curtis. “He hit some key 3s throughout the whole game.”

Jack Below shared team-high honors with Dailey with 20 points, despite facing multiple defenders all night.

“Ellinghouse, I thought had a tremendous game,” Wheetley said. “He carried them on the boards, putbacks and shooting. I told the kids early, he come to play and we really never did block him out very good.”

“We knocked down some shots early and then we went cold,” Dexter coach Chad Allen said. “We had the looks that we wanted. We definitely had a lot of looks on the perimeter. We just didn’t knock them down. Like I told the kids in the locker room, we’re going to have to come in and get some extra shooting in. If we can knock down those shots, we can compete with anybody.”

The Bearcats used a hot start from the perimeter, sinking three 3-pointers early to take an 11-2 lead.

“They moved the ball very well,” Wheetley said. They made our defense (work) We had to be on our toes the whole time.”

Curtis made consecutive 3s to cut the Hornets’ deficit to one (13-12) and they took their first lead of the game on two free throws by Below with 1:10 to play.

The lead changed hands three more times with Ellinghouse sinking a 3-pointer before the buzzer to give Dexter an 18-16 lead after one quarter.

The teams went back and forth in the second, swapping leads twice before another Ellinghouse 3-pointer gave the Bearcats a 23-21 lead.

Dexter maintained that lead until Dailey scored on a post move to give the Hornets a 30-29 lead.

“They really tried to pound it inside,” Allen said. “They got around us a few times. We talked about that a little bit in the locker room. To me, they were a little more aggressive off the dribble than we were. First and foremost defensively, we know we have to keep people in front of us.”

Advance pushed that lead to three points on a putback by Dailey, but Ellinghouse scored on an inbounds pass to slice the lead to 32-31 at halftime.

Ellinghouse scored on a feed from Jackson Allen to give Dexter a 33-32 advantage at the start of the third quarter, but the teams exchanged leads three times before Advance scored eight straight to take a 42-35 lead, an advantage it never relinquished.

The Bearcats kept pace for the remainder of the third from the free throw line, going 8 for 9, but Advance carried a 52-47 lead into the fourth.

The Hornets gave Dexter a shot late, missing 7 of 12 free throws in the final 1:30, but Dexter couldn’t make enough shots down the stretch to gain any ground.

Advance avenged a 54-52 loss to the Bearcats in the semifinals of the SCAA tournament.

“It’s a good win for us,” Wheetley said. “We’ll enjoy it but we’ve got a lot more ahead of us. We’ve got a lot of tough games coming up. I think this is going to help our confidence.”