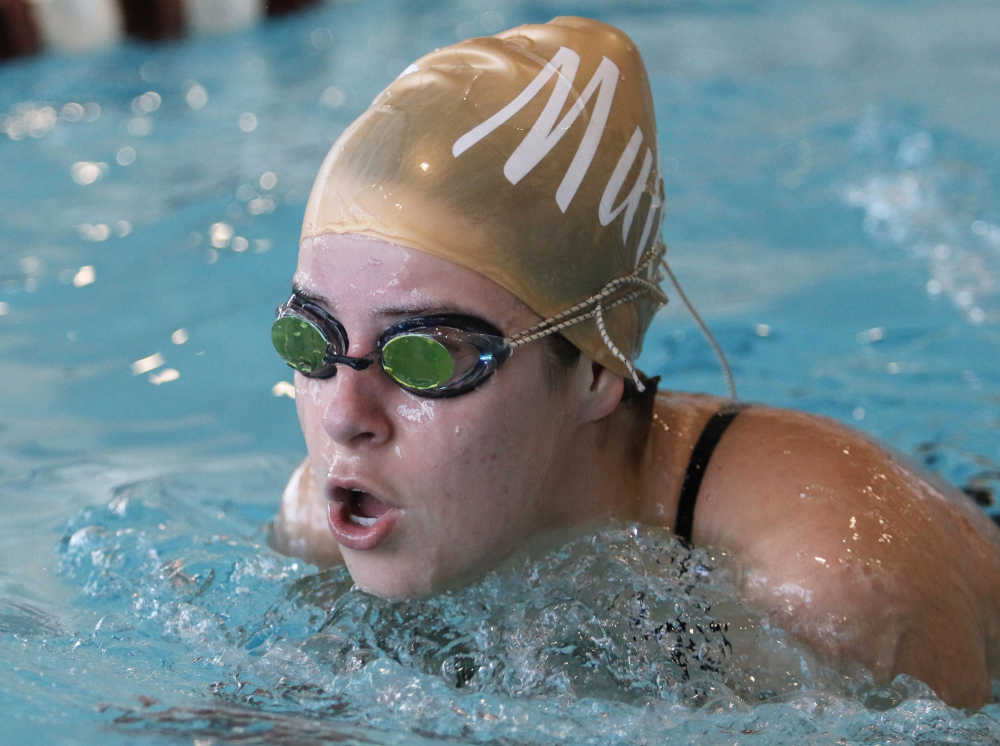 A Poplar Bluff swimmer wears a gold cap after earning the honor from a previous meet.
DAR FILE/Brian Rosener
Order this photo

To reach their potential, the Poplar Bluff swim team has focused on smashing ceramic tiles this season.

The goals for a recent home meet were written on a square tile to remind the swimmers not to be disqualified in their event, “everyone is cheering” and “don’t give up before the wall.”

The Mules reached their goal and won the meet, so at the following practice the tile was smashed with a hammer.

“I actually thought it was kind of cool,” said senior Audrey Cisne. “It’s a good concept because if you shatter your goal you get to shatter the tile.”

As a team-building exercise before the season, Mules swim coach Beth Lewis-Muse had everyone come up with individual goals to put on their own tiles.

Lewis-Muse said the concept came from the University of Missouri cross country camp that Poplar Bluff junior Jaden Deaton attended over the summer.

“My first tile was to get back to my original time as I was last year and get full motion back in my ankle. Get back in the pool and work hard,” said senior Carly Wiseman, who missed the first part of the season coming back from an injury.

“At the beginning of the season coach told us, she said, ‘live in the uncomfortable’ and so living in that uncomfortable meant, for me, if you’re not pushing yourself and you don’t feel the slightest discomfort and doing that, then you’re not doing it right,” Wiseman added.

Swimmers had specific times for events as goals but, Lewis-Muse said, they learned what was an achievable goal and understand it was a challenge.

“I think that helped out a lot because I see a lot more girls trying to do better in races now that they have a set goal in mind,” senior Jessica Rush said.

Swimmers could also earn a goal swim cap to wear. The coaching staff picks one swimmer after every meet that stands out. It could be attitude, earning a state cut, being a great teammate, helping with the setup or cleanup or earning a big cut in their personal-best time.

Lewis-Muse said the number of swimmers disqualified for early starts or illegal strokes dropped and attitudes are changing.

“The girls really got into it,” she said. “It gave some type of award system to keep them motivated to keep improving.”

The Mules were undefeated in duals this season and look to carry that success into the SEMO Conference championship meet on Tuesday.

Following practice Friday, the team set up their tile for the meet, choosing an acronym for the goals set.

Poplar Bluff has placed second to Cape Central in the conference meet in four of the last five years.

The Mules won in 2016 then placed 25 points behind Central despite winning seven of the 12 events. Two years ago Poplar Bluff won half of the events but finished 129 points behind the Tigers. Last year the margin was 65 points.

“I’m just really excited to see how much further these girls can go with their speed and their events,” Lewis-Muse said.

The meet will also be the last chance for swimmers to earn a state-qualifying time.

Currently, only Paige Bradley has qualified for the state meet in the 50-yard freestyle and in diving.

Poplar Bluff’s three relays have earned state-consideration cuts, meaning if they are still among the top 32 times in the state at the end of the season the Mules will be invited.