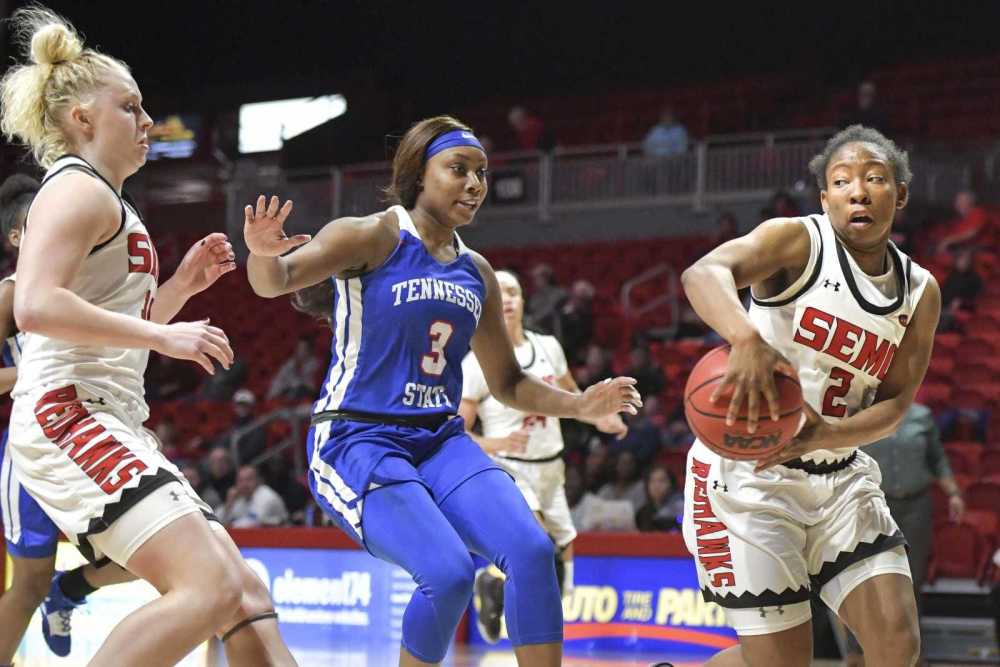 Southeast's Carrie Shephard (2) flicks a backward pass to teammate Sophie Bussard (34) before falling out of bounds during a game against Tennessee State Saturday, Jan. 11, 2020 at the Show Me Center in Cape Girardeau. Bussard would score on the play.
Tyler Graef ~ tgraef@semissourian.com

Southeast women’s basketball coach Rekha Patterson is aware this weekend’s contest at the Show Me Center is probably the most important game the Redhawks have played so far this year.

The Redhawks have not faced the Golden Eagles yet this season.

Southeast is coming off a blowout win at home Thursday over Jacksonville State, 79-52.

In the final turn

The importance of Southeast’s final regular season games is not lost on the fifth-year Redhawks coach.

“Only eight teams are headed to the (OVC) tournament,” said Patterson, “so every game has an NCAA tournament feel.”

“(Tennessee Tech) has a lot of scorers and is very strong on offense,” said Patterson, pointing out the Golden Eagles are second in the league in scoring at 71.5 points a game.

The top scoring team is Southeast at 73.5 points per contest.

Leading scorer is 5-foot-7 junior Kesha Brady, who is knocking down 15.6 per game for Tennessee Tech.

Tech’s Akia Harris, a senior, leads the league in assists.

Fellow senior Anacia Willkinson has 48 blocks this season, good for third in the OVC.

“We like to play our game no matter who it is,” said Patterson, 40. “We like to score in transition, meaning we need to push and run.”

“If we can achieve that,” Patterson added, “we’ll be in a position to be successful.”

Redshirt senior Carrie Shephard of Steele, Mo. already has 70 three-pointers on the season.

Southeast is at home for its next three contests and Patterson believes the crowd can become the Redhawks’ sixth man on the court.

“Whenever we go on a run or make a defensive stop,” Patterson, who is 72-70 overall at Southeast, “(our fans) give us energy.”

Southeast is 8th in the 12-team league in average attendance at 677 fans per game.

Southeast is currently second in the OVC standings, just behind league leader UT-Martin (14-8, 10-1). The Redhawks will face the Skyhawks in a home-and-home series – Thursday in Cape Girardeau and Sat., Feb. 22 in Cookeville, Tn.

The conference schedulers were not kind to Southeast – four of the Redhawks seven remaining games are against the Golden Eagles and the Skylarks – making it a tough climb for a team picked to finish sixth in the preseason.

“If we want to be the best,” Patterson said, “we have to beat the best.”