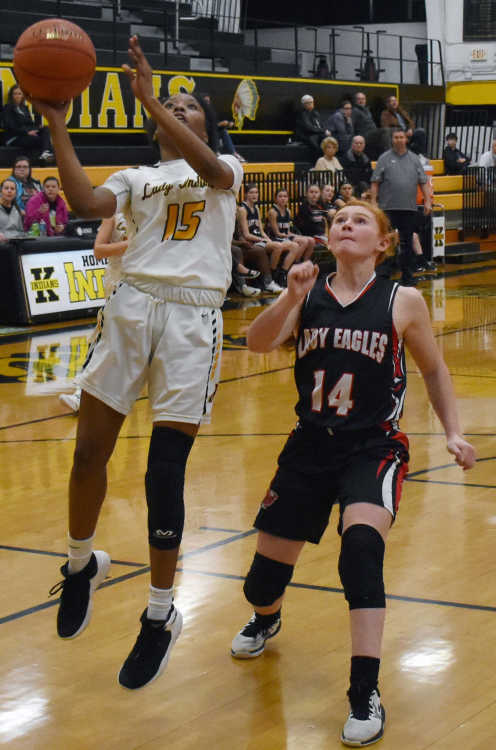 KENNETT, Mo. - The Kennett Indian varsity girls basketball team scored the first 10 points in its game against the East Prairie Eagles on Thursday night. Kennett had three players score in double figures as the Indians beat East Prairie in a 55-26 rout.

Kennett pressed the East Prairie offense and capitalized by scoring buckets in transition. Midway through the first quarter, Kennett led 10-0. By halftime, Kennett’s lead had grown to 29-8. The Lady Indians maintained a solid lead throughout the entire game. Kennett improved to a 12-10 record, while East Prairie fell to 0-14 on the season.

New went on to praise Kennett’s leading scorer for the night, sole senior Mallory Morrow. “I’m really proud of Mallory Morrow. Mallory is our only senior. The last three days in practice, she’s practiced harder than anybody out there, and she came out tonight and scored 18 points,” New said. “We’re extremely proud of her.”

Makenzie Williams led East Prairie with 15 points. Williams, a 6-foot center, defended the paint and had several blocks. On Wednesday, she signed her letter of intent to be on the Southeast Missouri State University track and field team. “She’s really important. She’s been a four-year starter for our program, and she’s going to be missed,” said East Prairie coach Ron Riddle. “We’re just trying to play hard and let the girls learn a good work ethic through her.”

Riddle saw progress in his team throughout the game. “We have a really young team. I thought the girls really played hard. Our ball movement was probably the best we’ve had all year,” he said. “We’re starting to get open shots now; we just have to start making them.”

On Monday, Kennett has a home game against Cape Central (13-7). “We have to come in and have good days of practice on Friday and Sunday. We’ll watch film on them and see what they look like from there,” New said.

East Prairie’s next game will be Friday against Oak Ridge (2-12). “We’re just taking it one game at a time, like the old cliché says. We’ve got a chance. I think they have a young team as well, so it should be a good matchup for us,” Riddle said. “We’re looking forward to getting back in there and trying to win one.”