And the beat goes on for Southeast women's basketball 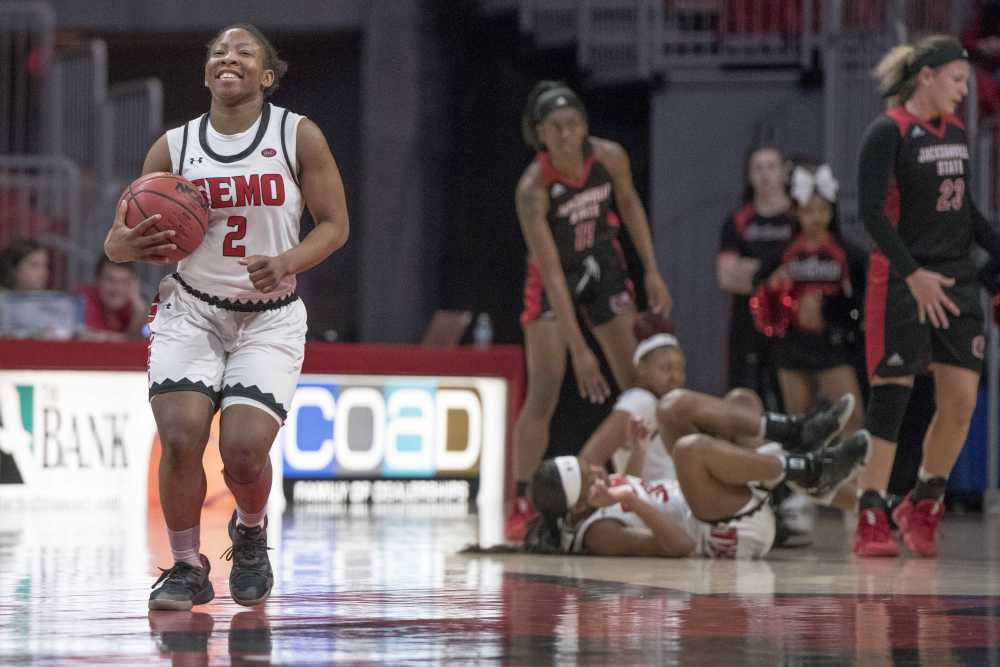 Southeast Missouri State University's Carrie Shephard (2) smiles after a game stoppage prevented what would have been a fast break during a game against the Jacksonville State Gamecocks Thursday, Feb. 6, 2020, at the Show Me Center in Cape Girardeau.
Tyler Graef ~ Southeast Missourian
Order this photo

For the first time in Rekha Pattersonĺs tenure, the coach of the Redhawks women can see a potential Ohio Valley Conference championship in her sights.

For the first time this season, Patterson admitted after the game her team might win the league.

ôWe do have a shot, yes,ö said the fifth-year coach. ôBut it wonĺt matter if we donĺt take care of Saturday,ö a reference to the coming tilt with Tennessee Tech at the Show Me Center.

Senior Jessie Harshberger, who did not see much playing time in Southeastĺs last two road games, had 11 points and eight rebounds in 17 minutes of play against the Gamecocks.

ôShe ainĺt lying,ö said a smiling Shephard, who led Southeast with 23 points, including four from beyond the arc.

Shephard has racked up 70 treys on the season. The guard from South Pemiscot High in Steele, Mo., set Southeastĺs single-season record for three-pointers last year with 73. With seven games left in the regular season, barring injury, the 24-year old is likely to soar past that figure.

The easy 27-point Southeast win over the Gamecocks may have been a surprise to some given Jacksonville Stateĺs humbling of three-time OVC champ Belmont, 60-41, on Saturday.

ôWe were tougher and scrappier tonight,ö said Patterson, whose overall mark at Southeast improves to 72-70.

ôWe got stops especially in the first half, but our defense and rebounding won this game,ö said Patterson.

After a contested first quarter that saw Southeast up 16-14 after eight minutes, the Redhawks pulled away in the final three frames.

ô(Early on), we put (Jacksonville State) at the free throw line too often,ö Patterson opined, a reference to 27 trips the Gamecocks made to the charity stripe, converting on 20.

ôWeĺre a veteran team who knows what itĺs like to lose,ö said Patterson, praising Shephard for her work ethic and Harshberger for playing through games in which she has not always felt well.

ô(Jessie) is everything you want a four-year player in this program to be,ö said Patterson. ôShe has such energy and we (depend) on her rebounding and defending ability."

ôItĺs coming down to who wants (the OVC championship) more,ö said Shephard.

Tesia Thompson was also in double figures for the winners with 22, including a 3-pointer. She continued her season-long excellence from the free-throw line, going 5-for-6.

Patterson not getting ahead of her skis

Patterson continued to exude caution as she looks toward the weekend.

ôWe have to stay in the moment,ö Patterson said. ôWe have to do whatever it takes to be 1-0 every single game.ö

Southeast, which was picked in preseason to finish sixth in the OVC, is currently in second place, one game behind UT-Martin (14-8, 10-1).