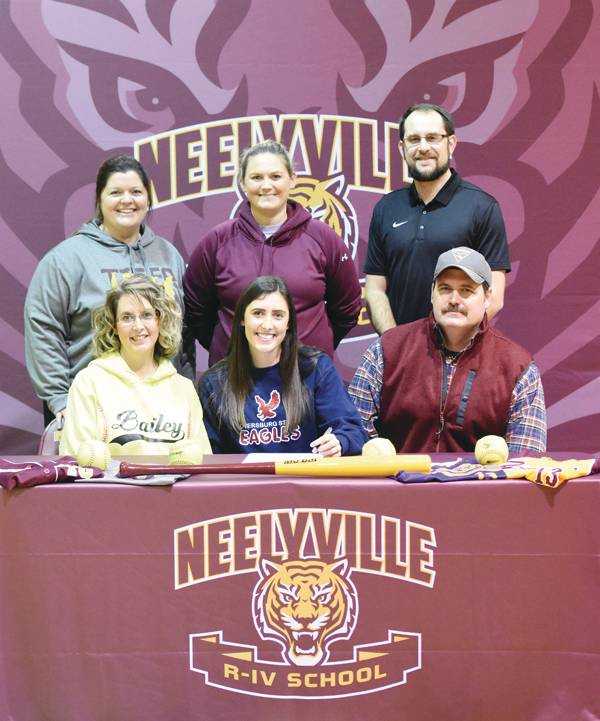 “It was a relief to get that done and make sure that is secured,” McGruder said. “It just felt like home. I went back to play a tournament there, we sat there and we ate dinner with them. It clicked. It felt good. I liked the town, I liked the team. The players were all really nice, the coaches seemed like they were invested.”

McGruder first visited the campus in October, about the same time she finished off a strong senior season that included a stellar game in the MSHSAA Class 2 District 1 semifinals against Twin Rivers.

“That game that sticks out for me was against Twin Rivers in the district tournament,” Neelyville coach Cindy Siebert said. “She came up in some clutch situations and she came through.”

Hitting second and playing in the outfield, McGruder was 3 for 4 with four runs, a double and an RBI as Neelyville won 9-5.

“This year she was huge,” Siebert said. “I think this year was probably her most memorable season. She had a great district tournament that really helped our team.”

Neelyville finished 15-13 in the fall. The Tigers lost in the district final to East Carter, which eventually finished fourth in Class 2. They had won six straight heading into the district championship.

“Halfway through the season, she started picking it up and had a good end to the season,” Siebert said. “There were balls that she tracked down that should have been doubles and she was knocking them down.”

McGruder said she knew she wanted to go to Dyersburg while sitting in the commons and overlooking the campus.

“I need to develop more speed and just get stronger. I need to work on my hitting a little bit more … It’s a step up. It will be faster-paced, more intense. I’m looking forward to just getting to meet new people and start with a whole new team.”

McGruder intends to pursue an eventual degree in pre-medicine.

“They have a good campus,” McGruder said. “The computer labs they have are really good, so I’ll get a good education there. It’s really good scenery, the fields good, the athletic equipment is good.”