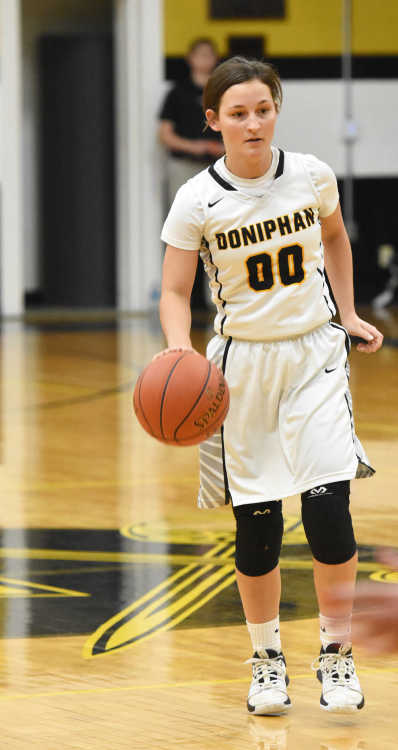 Doniphan senior Jaylin Dutton, seen in a game against Twin Rivers on Thursday, Jan. 30, 2020, in Doniphan, Mo., says "some people think you can’t play basketball and wear a skirt at the same time, but you definitely can."
DAR FILE/Scott Borkgren
Order this photo

Jaylin Dutton does not look like the typical high school athlete on the basketball court or the softball diamond.

Dutton, a senior at Doniphan High School, wears a skirt instead of the shorts or pants that most athletes wear when competing.

“Everyone believes different things — and I didn’t always play in a skirt,” Dutton said. “But my eighth grade year, my pastor came up to me and we talked about it — and I decided that I wanted to start playing basketball in a skirt.”

Dutton has worn skirts most of her life, primarily because of her faith. Many Pentecostal women — as Dutton is — and some independent Baptist women wear skirts because of their religious convictions. However, Dutton still played basketball in shorts before making the switch to a skirt in junior high.

“This is her decision,” Tracy Dutton, Jaylin’s mother, said. “This wasn’t me. She came to me and she said, ‘Mom, girls are asking me, ‘Why do you wear shorts to play?’ — because in fifth and sixth grade she did — and then you don’t [otherwise]. And she said, ‘I didn’t want to cause confusion anymore.’”

Jaylin said that the switch to a skirt did raise a few questions — at first.

“I feel like I was going deeper in my walk with God,” Jaylin said. “It was the best decision I ever made. Some people think you can’t play basketball and wear a skirt at the same time, but you definitely can. The reason why I do it is because I think it is pleasing unto God — and I feel like I have Scripture for it and it is pleasing unto the Lord.”

Jeff Dutton, Jaylin’s father and the pastor of Apostolic Lighthouse Church at Moark in rural Clay County, Ark., said that Jaylin studied the Bible for herself before deciding to switch to a skirt on the court and the diamond.

“We feel like the Bible is very clear on gender distinction,” Jeff Dutton said. “Not so much the skirt or whether it’s a pair of gym shorts, but we just feel like throughout Scripture God wanted a distinction. In different cultures, it looks different ... but here in the United States, I think one of the best ways that we can identify with what we feel like Scripture is saying is [for women and girls] to wear the skirt for gender distinction, because that’s what God’s always wanted — he’s wanted a separation between man and woman, and there’s always been one.”

At the same time, Jeff said that the decision for women to wear dresses and skirt is not mean to condemn those who feel differently.

“This is not to say that we’re better or worse than anybody else,” Jeff said. “That’s not why we do this. She has done this because we think this is where we can please him. In our relationship and in our commitment [to God], this is where we’re at.”

Jaylin, who is a starting guard for the Donettes basketball team and an all-district and all-region center fielder in softball, said that her teammates and coaches — namely Donettes basketball coach Adam Epps — have been very supportive of her decision to play in a skirt.

“I have the best teammates in the entire world,” Jaylin said. “When I first switched, they obviously had questions — but ever since then, they have completely been on board. They have never asked me about it. ... They’ve been so supportive through the whole thing.”

And her parents are 100 percent behind her as well.