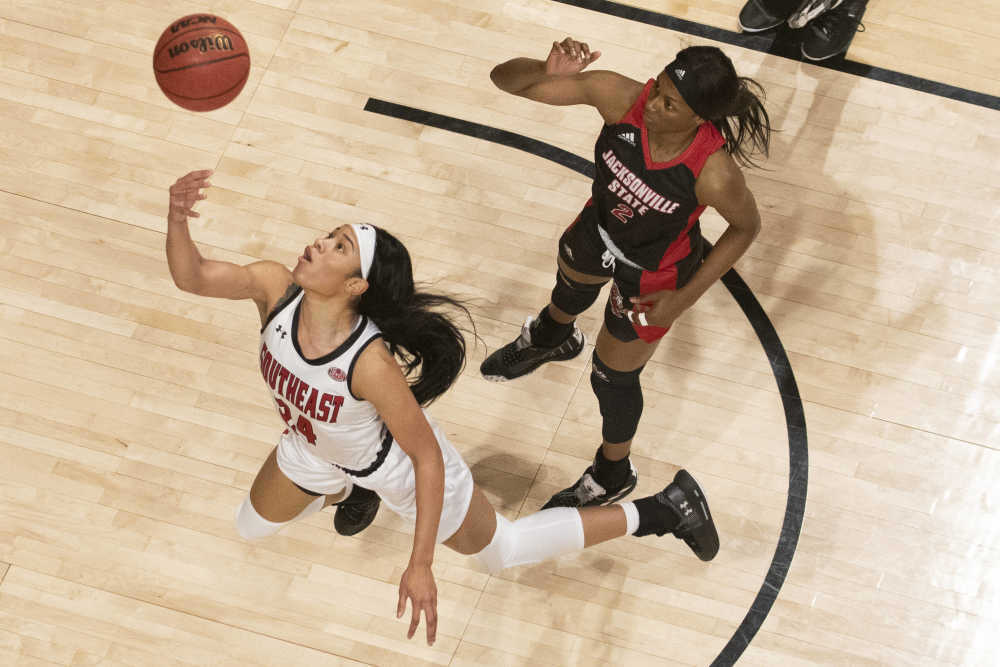 Southeast's Tesia Thompson (24) contends for a rebound in a loss to Jacksonville State, 56-39, on Feb. 9, 2019 at the Show Me Center
Jacob Wiegand ~ jwiegand@semissourian.com

On paper, Jacksonville State (10-11, 6-4, Ohio Valley Conference) would not appear to be much competition for the red-hot Southeast women Redhawks.

Both teams tangle today at the Show Me Center as Southeast begins a four-game homestand.

Southeast (16-5, 8-2 OVC) has vaulted up the league standings to a tie for second with defending OVC champion Belmont.

Just ahead of the Redhawks are UT-Martin and Tennessee Tech, with the latter coming to face Southeast Saturday. Both teams are tied for the league lead.

It’s getting tightly bunched at the top of the OVC standings.

Rekha Patterson’s team has a seven-game win streak, including four consecutive wins on the road.

To the fifth-year skipper of the Redhawks, the Gamecocks must not be taken for granted.

The team from Alabama

“(Jacksonville State) is extremely physical and disciplined,” said Patterson, whose overall record at Southeast is now 71-70.

“You have to work to get points against them,” she added.

Less than a year ago, the Redhawks fell at home to the Gamecocks and it wasn’t close.

Patterson most fears the JSU defense.

“They are second in the league in (scoring defense),” said Patterson, “(and) are holding teams to 60 points a game.”

Uppermost on Patterson’s mind is Saturday’s upset win by the Gamecocks over defending OVC champion Belmont, 60-41.

The Redhawks lead the OVC in several categories, most notably in scoring offense at 73.2 points per contest.

Carrie Shephard has connected on 66 treys but faces a Gamecocks defensive front which has the OVC’s best 3-point defense.

Patterson refuses to brag on her Redhawks, who are enjoying their best season during her tenure.

Asked to predict whether Southeast will grab its first regular season OVC title since 2008, she immediately demurred.

“You’ve heard me say this,” Patterson reminded. “We are (always) 1-0. It’s what (right) in front of us — and that’s Jacksonville State,” she added.

Two OVC players were named this week as semi-finalists for the Mid-Major Player of the Year award — Chelsey Perry of UT-Martin, the OVC’s top scorer at 21.6 points per game and Belmont’s Ellie Harmeyer, second in the league with 17.8 points per contest.

“Perry’s numbers are amazing and Harmeyer was the (OVC) preseason player of the year,” remarked Patterson.

Not in the discussion for the award are Southeast stars Tesia Thompson and Shephard.

“(Tesia and Carrie) may not get the (impressive) numbers others may get,” said Patterson, “but we have a (more) balanced team.”

There are eight games remaining in Southeast’s regular season. Four of the last eight are against the OVC co-leaders — UT-Martin and Tennessee Tech.

“Thanks for reminding me,” gently chided Patterson. “This is a very good league and we have so many meaningful games left.”

The OVC tournament begins March 4 in Evansville, In.