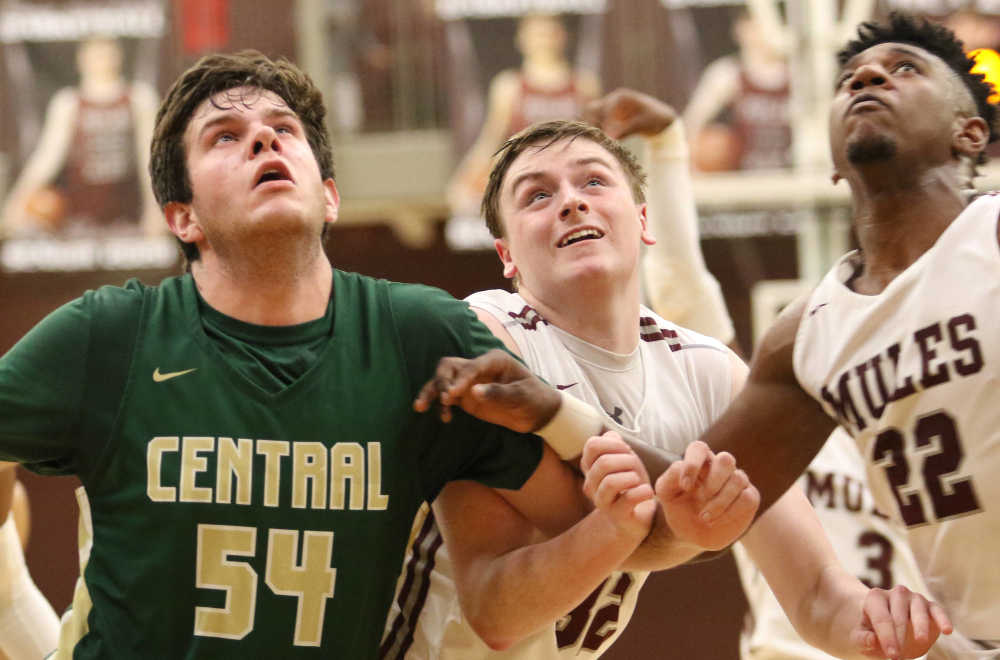 POPLAR BLUFF, Mo. — After 11 lead changes and a pair of ties with neither team leading by more than five points, New Madrid County Central found a play that worked and kept going to it.

Joseph Hardimon's jumper 41 seconds into the fourth quarter put the Mules ahead but Poplar Bluff didn't score over the next 2 1/2 minutes. 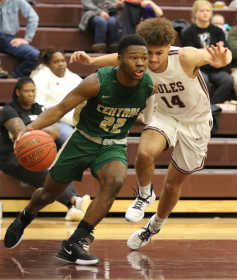 "We've been giving the ball up in the same situations in the past," Central coach Lennis McFerren said. "But tonight they grew up a little bit. That was the difference." 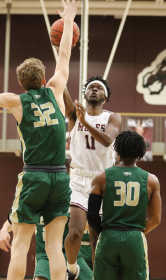 "We didn't stay in front of them, we lost concentration, missed key assignments defensively down late and got beat," Poplar Bluff coach William Durden said.

"We did everything we needed to go ahead in the game."

Hardimon scored 14 points and Chance Campbell added 11 to lead the Mules, who were outrebounded by 10 and were minus-seven on turnovers.

During the fourth quarter, Central methodically worked the ball on offense and either got Phillips open for a baseline drive and layup, or got the Mules to foul.

"He does a good job taking that baseline," McFerren said. "If I can get him to do that every time, he likes to shoot outside. We need him to do what he does best."

Poplar Bluff put the Eagles in the double-bonus late in the third quarter and Central took advantage by sinking 7 of 10 fouls shots the rest of the way.

"We fouled a lot and they made their free throws," Durden said.

Central led 36-35 heading into the fourth but Hardimon scored for the lead with 7:19 to play. Donnie Brown, who scored nine points, sank two foul shots to regain the lead for the Eagles and Bryshawn Williams followed a Mules missed shot with two more free throws.

Ke'von Williams stole a loose ball and Phillips got to the baseline for a layup for a 42-37 lead. The Mules missed a 3 and Bryshawn Williams sank a foul shot to lead by six with just under five minutes to play.

Phillips answered a Mules basket with a baseline drive then sank a pull-up jumper from 13 feet after another missed 3 by Poplar Bluff, which was 3 of 11 from the field in the final frame.

"We come down and try to get the points back in one shot," Durden said of the missed 3s. "You can't do that."

Ke'von Williams scored off a pass from Brown and threw down a dunk after breaking Poplar Bluff's press for a nine-point advantage with under two minutes to play.

"We kept them from doing the things they enjoy doing like running the floor," McFerren said. "It was our press and taking our time, discipline on offense, that was the difference in the game."

The Eagles scored the first four points of the game and then six straight for a 10-5 lead but that ended up being the largest advantage of the first half.

Centrall led 13-10 after one quarter and the teams traded points over the next two minutes before neither team could find the bottom of the net. The scoreboard was stuck on 19-15 for four minutes as each side came up empty on eight possessions.

Marquis Johnson ended the suspense with a free throw with 2:19 left in the half and Nic Brumitt scored following a Central turnover to pull the Mules within a point, 19-18 at halftime.

"Two teams played good defense," McFerren said. "He worked for (Three Rivers College) Coach (Gene) Bess. I played for Coach Bess, so you're going to have defense on your mind."

Hardimon put the Mules ahead to start the third quarter that turned into a tennis match with the lead. Neither side led by more than three and the lead changed sides four times in the final 100 seconds alone.

Poplar Bluff, however, was also picking up fouls. The Mules had seven midway through the third quarter, before Central had committed its first foul.

The Eagles had not beaten Poplar Bluff since the 2014 SEMO Conference finals, snapping a six-game streak.