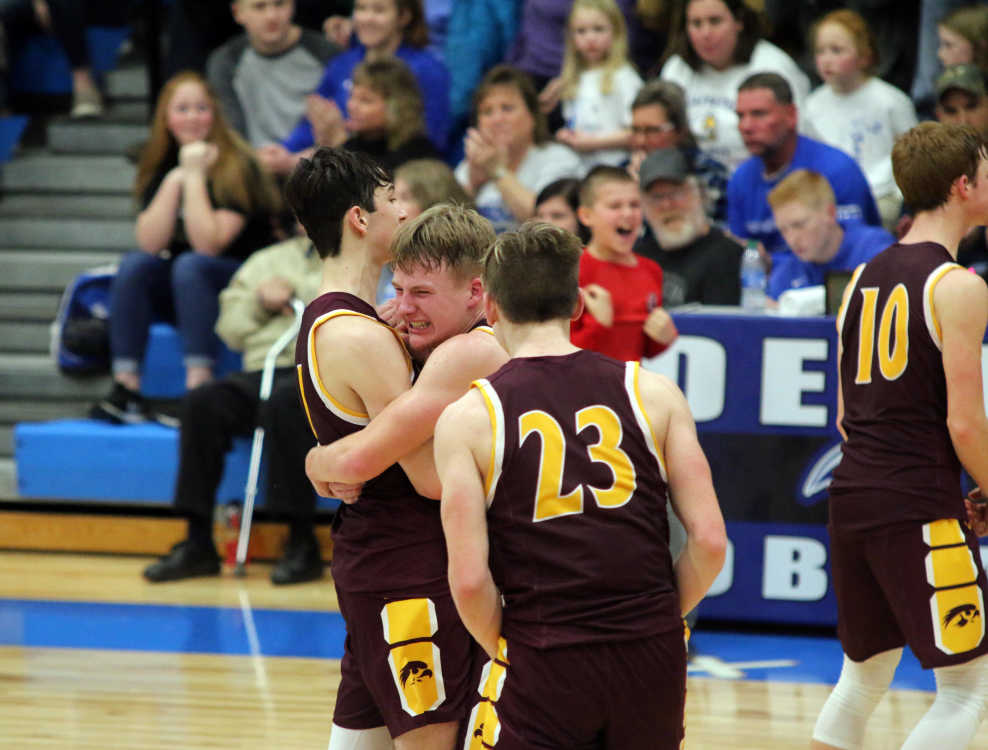 DELTA, Mo. — As Cooper Priggel’s desperation heave went off the mark and Kelly gathered the rebound, the bench, and fans wearing Maroon and Gold cheered with joy as the Hawks upset Oran, at Delta High School, on Tuesday night.

The No. 1 seed in the Scott-Mississippi County Conference Tournament and No. 3 seed in Class 2, fell in an overtime thriller to the Hawks 57-56 in the semifinals, leaving not one Kelly player, coach, fan, or parent without a smile on their face.

Sophomore Gavin Jansen was a major reason for the Hawks' success and showed that with his play in the fourth quarter and into overtime.

Tied at 50, Kelly took the first lead of the overtime period.

After Joel McClain missed his three-point attempt, Jansen was in the right position to clean up the mess and followed that up by getting his shot off — while drawing a foul — and letting out a scream and fist pump after getting his basket to go. He went on to make his free-throw attempt to put the No. 5-seeded Hawks up 53-50 with three minutes left.

Jansen scored all but two of his team’s points in overtime and called his team’s victory “one of the biggest of their lifetime.”

“No. 3 team in the state, it was crazy,” Jansen said. “Probably my favorite game of my life honestly. It’s crazy. I don’t know the last time Kelly has ever been in a conference championship, and I want to win it for us.”

Even though he did all of his damage close to-the-basket, Jansen stuck to what was going right, and it paid off in the end.

Jansen did not attempt a three-point shot on the night and was 7 of 10 from the floor for 22 points. He added seven rebounds and was a perfect 6 of 6 at the charity stripe as well.

“It’s hard to beat a team three times,” is a phrase that gets used countless times when it comes to basketball.

Tuesday marked the third time this season that Oran and Kelly have met. The first meeting came in the Oran Invitational Tournament championship game, with Oran winning 79-49.

Then, on January 14, the two teams met again — also at Oran High School — with the margin being much closer.

With the two teams playing on a neutral site, the result turned out differently, and Kelly head coach Fred Johnson added that no matter the opponent, every win to his team, is a big one.

“Oran is No. 3 in the state, and that tells you that we're not playing a weak team,” Johnson said. “It could be a big momentum booster. It just depends on these boys, and what happens between tonight and Friday. I’ve seen teams win like this and turnaround the next game and lay down. I don’t think mine will lay down, because the thing is, we’re not going to let them.

“We might get our butts beat, but it won’t be because we aren’t going to play as hard as we can.”

A strong night rebounding proved to be a difference for Kelly as well.

The Hawks outrebounded the Eagles by four, at 30-26.

Sophomore Joel McClain led the game with 12 boards. He had seven defensive rebounds and five offensive.

McClain also came up with some huge offensive boards that turned into points. At the end of the third quarter, Heuring attempted a three-pointer from the top of the arc. His shot went off the mark, but there to collect it was McClain, who then turned it into points as he got the hoop-and-the-harm to cut the Oran lead to three points heading into the final eight minutes of regulation.

Then, in the fourth, the same situation happened, as Oran could not find McClain to box him out, leaving him free to rebound and collect another opportunity for the Hawks. After Morgan missed a shot from the left baseline, the sophomore was there — once again — collect the miss and turn it into points, as he got his putback to go and give Kelly a three-point lead.

After Heuring knocked down a pair of free throws, to increase the Kelly lead to 50-47, with 5.9 seconds left in the fourth period, there weren't many options left for Oran head coach Joe Shoemaker.

All everyone knew was that the Eagles needed a three.

They would get just that.

As the clocking was ticking down, Oran junior Ty Johnson had a look at the rim and made the most of it. With Kelly defenders around him, he created enough space, and made a fadeaway three, just as time expired.

With both arms in the air, Johnson left part of the gym speechless and the other joyful. Oran had new life and another opportunity at another win.

During the brief break that Shoemaker had with his team, all he talked to his team about was time.

“We just talked about how much time we had and what we were down,” Shoemaker said. “We knew what kind of shot we had to have. Maybe looking to get a ball pick, but we didn’t get it down quick enough, and Ty just made a heck of a shot.”

Johnson finished with 11 points and nine rebounds. He only made one three-pointer, and it proved to be the biggest one at that time.

Senior Todd Priggel, who got injured on December 26, received some good news earlier in the week. Shoemaker said that doctors told Priggel that a return is possible, with a date set around the district tournament.

Kelly advances to the conference championship game, on Friday, at 7:45 p.m. They face either No. 2 seed Delta or No. 3 seed Oak Ridge.

Oran plays in the third-place game, at 5:15 p.m., against the loser of the Delta and Oak Ridge game.