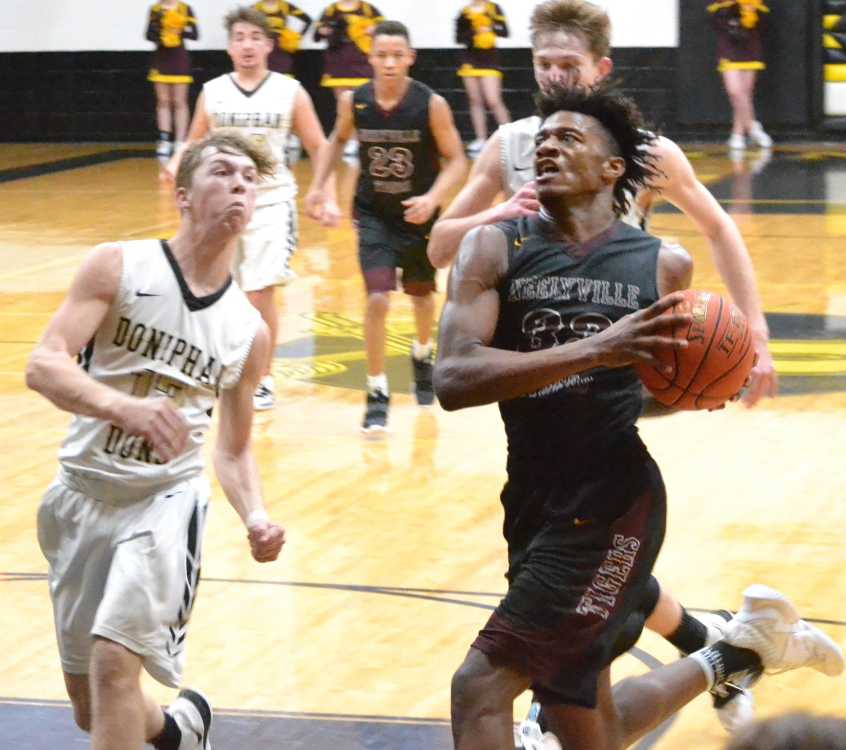 DONIPHAN - There was no drama to be found Tuesday night as the Neelyville Tigers laid claim to the Ozark Foothills Conference regular season title on the road in convincing fashion at Doniphan.

In the first 5-1/2 minutes of the game, Noah Burton, Austin Ennis and Curtis Fowler opened the scoring with long 3s and Fowler mixed in an alley oop dunk on a nice assist from Kobe Hayes. Neelyville led 13-0 and Doniphan never got any closer the rest of the night as the Tigers eased to a 57-36 win.

“We played well,” said Neelyville coach Patrick Morton. “We’ve kinda been picking up the pace a little bit toward the end of the year.”

Neelyville (13-7 overall) not only will serve as host for the OFC Tournament when play opens Saturday but wrapped up the No. 1 seed in the boys bracket while closing regular season conference play with a 5-1 record. The tournament draw is set for today.

Doniphan (11-11) also entered the game with a 4-1 conference record but the Dons could never get untracked offensively against the Tigers’ man-to-man defense. Doniphan trailed 16-4 after one quarter while hitting just one of 12 attempts from the field. The Dons shot just 20 percent (5-of-25) for the first half and trailed 27-15 at the halftime break.

“We were able to execute what we wanted to do defensively and things started falling into place offensively,” said Morton.

Fowler, a 6-4 senior, led the Tigers with 20 points including a pair of strong dunks in the first 8-1/2 minutes. Hayes finished with 11 points and Ennis with 10 as both combined to hit three 3-pointers apiece. Neelyville outscored the Dons 27-6 from 3-point range.

Junior post Orie Owen led Doniphan with 19 points but was the only player to score more than five points for the Dons.

Neelyville returns six seniors and four starters from a team that reached the conference tournament and district tournament championship games a year ago.

Neelyville started the season with a 6-5 mark including a pair of 30-point losses in December.

“I do feel like we’re playing better than we did in December,” said Morton. “We got some kids back who were out with injuries. When we have everybody on the floor I feel like we can play at a fairly high level.”

Morton expects the conference tournament to be another challenge for his veteran team.

“We’ve had a lot of close conference games and Twin Rivers beat us,” said Morton. “Being at the top or wherever doesn’t add up to a whole lot. We’re still going to have to play some tough teams to win this tournament.”