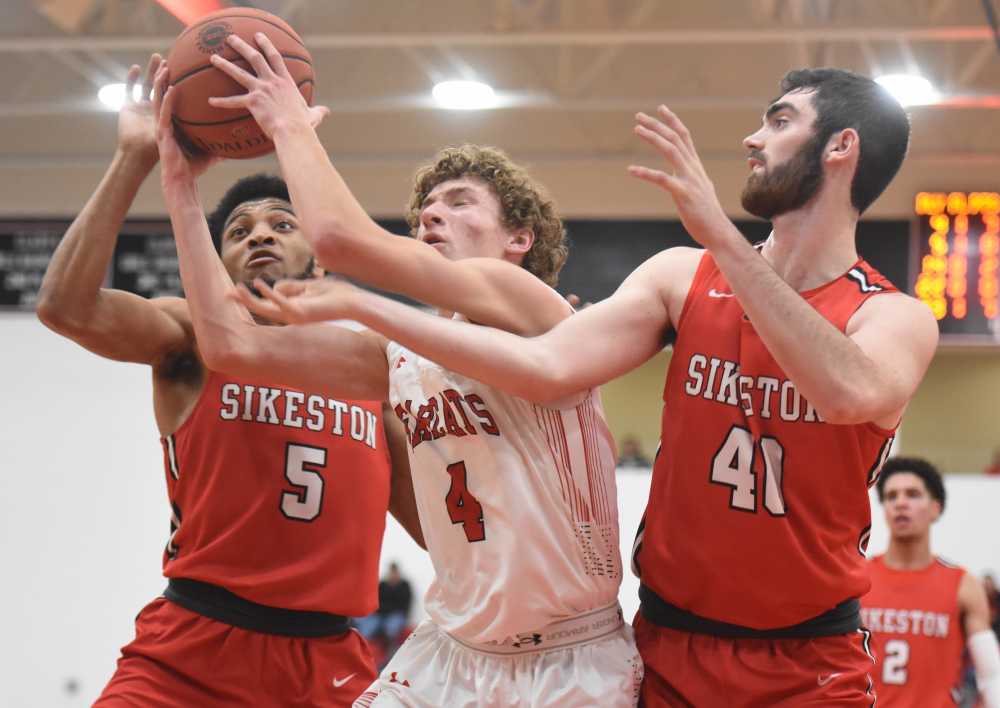 DEXTER — The Sikeston Bulldogs may not have the offensive firepower as in years past, but they still know how to play pressure defense.

The Bulldogs turned up the pressure in the second quarter and rallied to beat the Dexter boys basketball team 54-38 Tuesday night at the Bearcat Event Center.

Sikeston forced around 20 turnovers to win its 24th straight against the Bearcats, dating back to 2004. 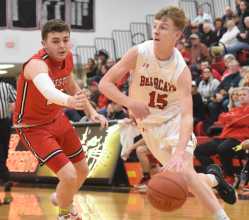 “I thought our guys did a good job in the second quarter on through the third and fourth,” Sikeston coach Gregg Holifield said of his team’s play on defense. “We had good pressure on the ball. We guarded hard and tough and rebounded much better. They hurt us on the boards in the first quarter badly, and our guys got a different level of aggression in the second, third and fourth.”

The Bulldogs didn’t come out with a lot of intensity, and Dexter took the early lead. They fought back in the second quarter to tie the score at 22 at halftime.

Sikeston stepped up the pressure even more in the third quarter, holding the Bearcats scoreless and taking a 37-22 lead into the fourth.

The Bulldogs outscored Dexter 27-4 over the middle two quarters.

“I thought we really came out and played well in the beginning,” Dexter coach Chad Allen said. “We shot it well. Coming out that second half, they turned up the pressure and we had a lot of turnovers. That killed us. It didn’t seem like we got a shot off (until) about midway through the third quarter. When we were getting shots off, we weren’t taking great shots. We’ve got to learn from this game and get better.”

Dexter didn’t score its first point of the second half until Garrett Henson made a free throw with 6:11 left in the game. Carter Dorton’s 3-pointer with 5:35 remaining was the Bearcats’ first field goal of the half.

The Bearcats committed eight turnovers in the third quarter, and Leroy Atkins scored eight of Sikeston’s 15 points in the period.

Payton Howard paced Sikeston with 16 points and reached 1,000 career points with a jumper in the lane late in the fourth quarter.

“As good a player as he is, he’s a great guy,” Holifield said of the senior. “We’re going to miss him so much next season. He’s one of those guys I can’t explain how much he’s meant to our program. The great teams he’s played on and been a part of. (He played) against Vashon in the state tournament as a freshman and (he’s been) doing a great job (through) his senior year.”

Atkins and Lontas McClinton added 11 points each, as Sikeston improved to 10-6 overall and 2-2 in the SEMO Conference.

Andrew Ellinghouse scored a team-high 16 points for the Bearcats, who fell to 11-7 and 0-4.

Dexter forced seven first-quarter turnovers and held the Bulldogs to one shot on most trips down the floor.

The Bearcats scored nine of the game’s first 11 points behind an attacking, unselfish offense. All nine points came on assists.

Ellinghouse scored the first seven points, including a 3-pointer that gave Dexter a 7-2 lead. Henson scored on an assist from Peyton Driskill to give the Bearcats a 9-2 advantage.

Howard scored Sikeston’s first points on a jumper, cutting the lead to 4-2 on a jump shot.

Ellinghouse scored on a putback late to give the Bearcats an 18-10 lead entering the second quarter.

Colby Henson and Atkins hit 3-pointers, and the Bulldogs sliced the lead to 20-18. Cole Nichols made two free throws to push the lead back to four, but Kenyon Smith scored on a fast break following a turnover and Howard scored on a putback to tie the score at 22 at halftime.

The Bearcats went 0 for 10 from the field in the third.

“I think Dexter’s a good team,” Holifield said. “They’re hard to play against. They handle the ball well. They pass it well and they shoot it well. I thought our guys did a good job of getting up in ’em and getting them off the 3-point line.”