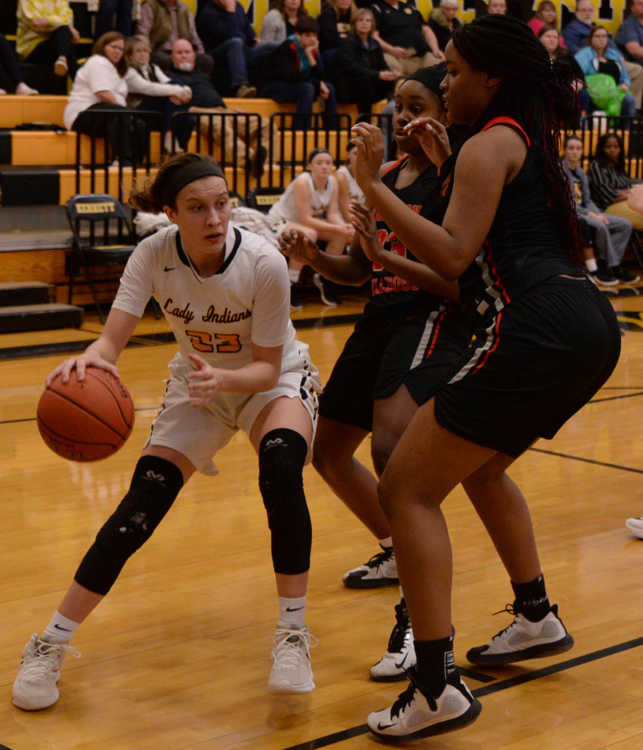 KENNETT, Mo. - The Kennett Indian varsity girls basketball team seemed evenly matched with the Sikeston Bulldogs at their game Monday night. After being tied following the first quarter, Sikeston went on a run and outscored Kennett 27-6 as the Bulldogs rolled to a 50-36 road victory.

Both teams traded buckets to start the game. Kennett displayed excellent ball movement early and scored three straight layups assisted by good passes. Sikeston implemented a full-court press from the start, but Kennett managed to create offensive opportunities by breaking the press. “I thought our press offense was good, and we handled the pressure. Our turnovers that we had were caused by us, by just throwing the ball away,” said Kennett’s head coach, Aaron New.

After the first quarter ended, Sikeston began to take over. Sikeston outscored Kennett by a 15-2 margin in the second quarter and a 12-4 margin in the third quarter. “We have a hard time scoring at times, and for about two quarters, we couldn’t score. That was the difference in the game,” New said.

Despite a fourth-quarter push by the Indians, Sikeston closed out the game to move to 9-9 on the season. Kennett fell to an 11-10 record.

Taydrianna Barnett scored 24 points, and Karris Allen scored 14 points to lead Sikeston in scoring. Alisha Wills, Sikeston’s head coach, praised Barnett. Wills mentioned that Barnett is the only senior on the team, so they rely on her experience at the varsity level.

Kennett’s leading scorers were Caroline Patton and Kyra Jaco, who each had two 3-pointers. Patton finished with 11 points, and Jaco had nine points. Sophomores Ara Spielman and Anelle Harris each added four points to Kennett’s total.

Sikeston’s next game will be Thursday against Neelyville (16-3), a team that received points in the latest Class 2 basketball poll. “We know that Neelyville will be a battle for us. I don’t think that they’re as young as we are, so we’re going to have to mentally get ready for that,” Wills said. “It will be a physical game, and they are a well-coached team.”

Kennett’s next matchup is Thursday against East Prairie (0-13), a team that is still searching for its first win. “We have to come in the next two days to practice and get better,” New said. “We’re to that point in the season where we’re starting to look at the district tournament and what we need to do in these games leading up to it to get ourselves ready.”