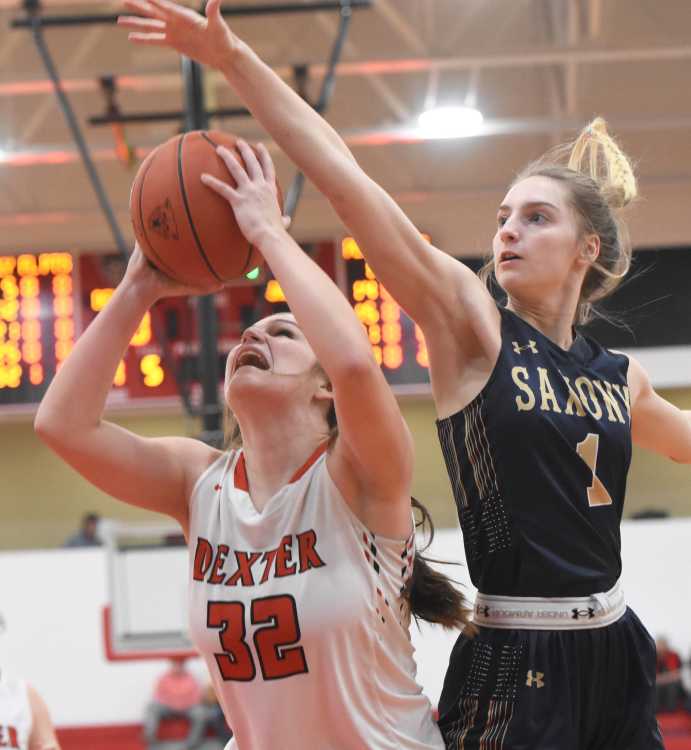 DEXTER — The Dexter Bearcats showed glimpses of how competitive they can be.

The Bearcats played well in stretches, but Saxony Lutheran broke through in the fourth quarter to beat them 66-43 in a SEMO Conference girls basketball game Monday night at the Bearcat Event Center.

The Crusaders, who led by only three points halfway through the third quarter, went on a 14-1 run in the fourth to improve to 12-8 overall and 2-1 in the conference.

Dexter still had a chance entering the final quarter, trailing by only 10 points but fell to 3-16 and 1-2.

“We had some good moments tonight,” Dexter coach Eric Sitze said. “But against good teams like Saxony and Notre Dame and the teams we play the rest of the way out, we have to be consistent the whole game. If we let those teams get those big runs on us, it’s hard to come back because they score so well. We’ve got to keep the game in the 40s and low 50s. We can’t give up (more points than that).”

The Bearcats closed the first and second quarters strong and started the second half with vigor.

Sitze said his team has struggled coming out in the second half of games this season.

“I thought we really did a good job coming out in the third quarter and making a run on them,” Sitze said.

Dexter scored eight of the first 10 points of the third quarter. Dulcie Pullen’s putback sliced the lead to 35-32.

Saxony Lutheran’s McKenna Webb and Dexter’s Caitlin Giles traded baskets before the Crusaders closed the quarter on a 9-2 run.

Saxony Lutheran began attacking the basket and drawing contact during its late rally. Junior Maddox Murphy scored on a traditional 3-point play and made a 3-pointer at the buzzer, and Saxony Lutheran took a 46-36 lead into the final quarter.

Murphy led the Crusaders’ second-half charge, scoring 14 of her 17 points in the third and fourth quarters.

“Maddox had one of her better games,” Saxony Lutheran coach Sam Sides said. “She can play. She can shoot. She’s playing with more confidence. We need that out of her to compete against these bigger schools.”

She scored 21 of her game-high 27 points in the first half, while the team’s second-leading scorer, senior Olivia Spanley, went scoreless before halftime while dealing with foul trouble. She finished with six points.

“She’s a competitor,” Sides said of Brune. “She’s hard to guard. She’s strong. She’s undersized but I play her everywhere on the floor. … She’s got a lot of game. It puts a lot of pressure on her, but she’s a very dedicated, hard-working kid. I’m very blessed to have her on my team.”

The Crusaders scored nine of the first 10 points before Werneck made Dexter’s first field goal, a 3-pointer with 3:30 to play.

“We got down too much that first quarter with that run-and-jump,” Sitze said. “We haven’t seen a lot of run-and-jump. It took us a little while to adjust to it. They made a big run on us early and it took a lot of energy to come back.”

Dexter closed the quarter with a 6-3 rally and trailed by only seven points (17-10) entering the second.

Asberry sank a jumper and Murphy made 3-pointer before Werneck turned a steal into a layup and sank a baseline jumper.

The Bearcats closed the half strong, scoring seven of the last nine points. Asberry scored all seven on a 3-pointer, a fast-break basket on an outlet pass and a steal and jumper to slice Dexter’s deficit to 33-24 at halftime.

The Crusaders could have led by more at halftime but they struggled shooting from outside, making only 4 of 14 (29%) shots in the first half.