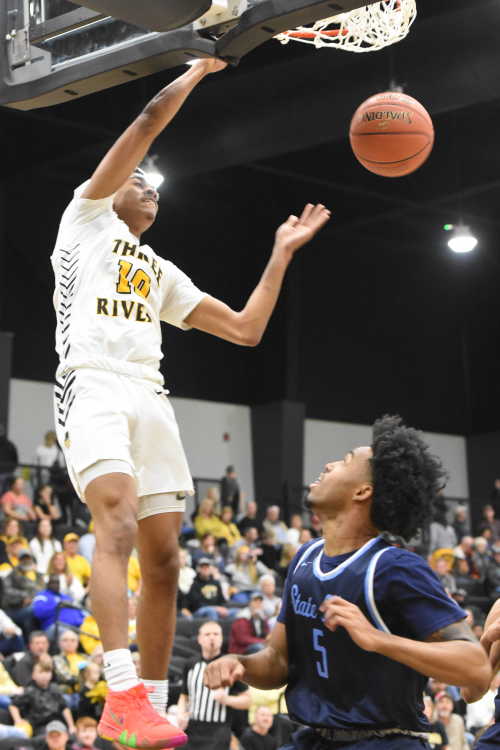 Three Rivers is searching. Searching for players to step up, for combinations that work, for answers to problems.

On Jan. 12, State Fair's Damaria Franklin had 34 points and 10 rebounds against the Raiders, but Three Rivers found a way to rally from 18 points down to win. In Saturday's rematch at the Libla Family Sports Complex, Franklin similarly had 33 points and seven rebounds. The Raiders never trailed by more than eight points, but couldn't put together a late rally and lost 73-66.

"I like this group of guys, but they're not holding each other accountable. We're going to have to find 5-7 guys who can guard. Some of the mistakes we make with the ball are just ridiculous," Bess said. "They run out on us, that's a weakness we have. Full-court press, that's a weakness we have. We rebound cautiously at best. It hasn't been good tonight, but life goes on and God is in control."

It wasn't until the Roadrunners scored three quick baskets with 5 minutes left in the game that they even led by as much as six points. In the closing minutes, Three Rivers (14-10, 2-4 Region XVI) held Franklin to one point, but the rest of the Roadrunners got enough putbacks and free throws to counter each Three Rivers basket and the Raiders never got back within one possession.

"It's kind of difficult. You've got to worry about the shot, (Franklin) can also drive, and he's also really good about using his body, so you have to just stay solid on D," said Three Rivers' Kinyon Hodges, who was tasked with guarding Franklin late in the game.

"We've been giving everybody a chance to play. The point of emphasis was to get the ball in the post, and I'm finding every game we come out it's something a little different," Bess said.

Along with Franklin, Trent Lyles had 13 points and Malcolm Townsel had 10.

"We need to play harder on defense and make rebounding a bigger priority than what it is," Hodges said. "We just had a bad time on defense. Bad rotation, hard time staying in front of the ball handler."

Tied at eight points early, Hayden Sprenkel, Dionte Raines and Willie Lucas sank 3s on straight possessions, and then Raines scored with more than 10 minutes left in the first half to give Three Rivers the only double-digit lead of the game.

"We came out hard and then probably got relaxed once we got the lead. It kind of just went down from there," Hodges said.

State Fair (13-10, 1-4) answered with its own series of 3-pointers and retook the lead with 5 1/2 minutes left after Michael Wright scored from beyond the arc for his only basket in the game.

Dominique Hardimon got a steal and a dunk for the Raiders, but Franklin scored to take the lead right back for the Roadrunners.

State Fair held onto its small lead until Lucas made a 3 with 18 seconds left to tie the game. With the Roadrunners' final shot, Franklin scored from NBA range as the buzzer sounded, giving him 18 of State Fair's 34 points in the first half.

"We knew how good he was," Bess said of Franklin. "We don't have anybody who wants to step up and guard a great player."

Harris finished a three-point play to give the Raiders their first lead of the second half about 4 1/2 minutes in that also picked up a fourth foul against Kaill Walton-Blanden.

Harris earned another three-point play off a turnover a couple of minutes later, this time against Kohen Thompson, and Thompson was called for a technical foul after the play, although the Raiders missed both of the technical foul free throws.

With 11 minutes left, Tallon Fonda got a three-point play, again through Thompson, who went to the bench with four fouls and the Roadrunners up by one.

With the help of four State Fair team fouls in the span of three minutes, the Roadrunners were in the bonus with more than 9 minutes left in the game, the Raiders ahead by one and Walton-Blanden and Thompson, both starters, on the bench with four fouls.

Still, the Roadrunners put together three quick baskets to go ahead by six, their biggest lead up to that point. And It turned out to be enough.

"These guys, they just don't have the focus that we need ... we've got another month," Bess said. "I know the coaches are not going to give up. We think it is right there for us."