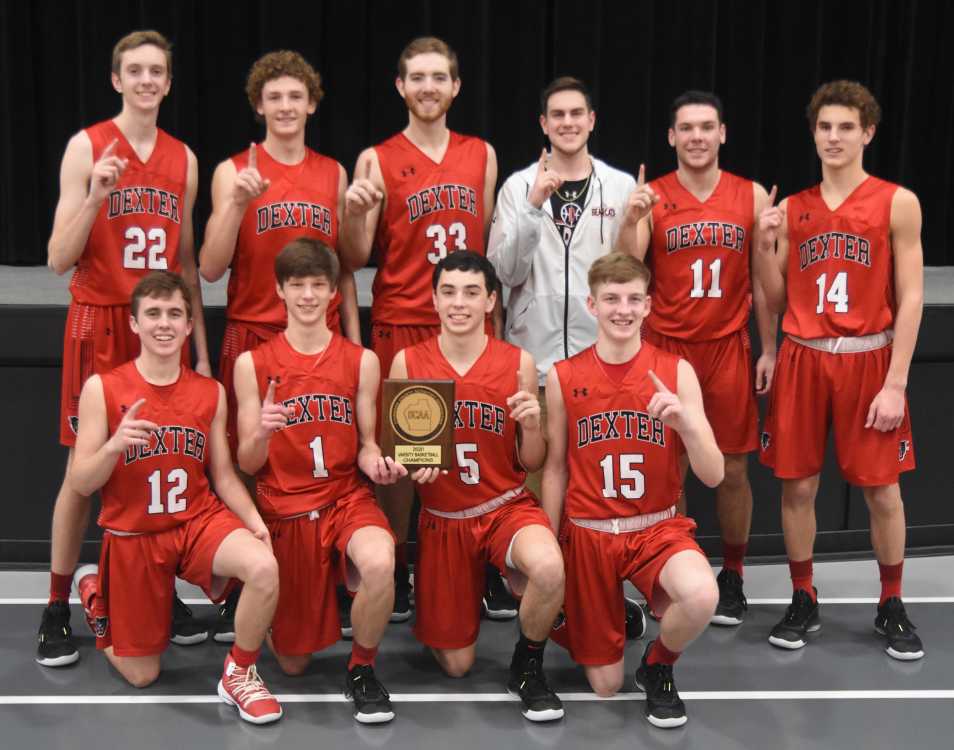 DEXTER — The Bernie Mules had the ball with about a minute to play and trailed Dexter by two points in the championship game of the SCAA boys basketball tournament.

The Mules ran the clock down until 27.9 seconds remained, called a timeout and went searching for an open shot. Struggling to find an open look, they appeared to catch a break when they were fouled with 4.1 seconds to go. However, the foul was the only their sixth, so the bonus was not in effect and no free throws were attempted.

Instead, the Mules got off a 3-point try from along the right baseline with only a couple of seconds left. The shot didn’t fall and second-seeded Dexter repeated as SCAA champion with a 56-54 upset of the top-seeded Mules.

“I was guarding (Landon) Zoll,” Driskill said. “I knew they were going to try to get him the 3, so I was like, ‘I’m not going to let him shoot this ball.’ I figure everyone else had that in mind, too, not let their guy shoot the ball.”

The Bearcats ended a seven-year tournament drought last year with a 61-42 victory over Bernie.

Bernie (16-5) led by 10 points in the third quarter and carried a six-point lead into the fourth, but the Bearcats (11-6) picked up the pressure defensively and forced six Bernie turnovers.

“The guys really competed,” Dexter coach Chad Allen said. “They made plays down the stretch. I think we got down 10 … and we picked up the pressure and turned them over a few times. The guys really wanted it bad. They fought hard at the end to pull this one out.”

One of those turnovers came on a 10-second call amid a 5-0 run by Driskill.

Driskill made two free throws with 5:40 to play to cut the

Bearcats’ deficit to 50-49. After the Mules couldn’t advance the ball past midcourt in 10 seconds, Driskill was fouled and made the first free throw to tie the score.

However, he missed the second free throw but rebounded his own miss and scored to give the Bearcats a 52-50 lead, their first since 24-22 late in the second quarter.

“I thought Peyton Driskill really stepped it up at the end of the game,” Allen said. “He got some turnovers and made some great plays offensively.”

Driskill finished with nine points with seven coming in the fourth.

“I was really fired up out there,” Driskill said. “I played one of the best games I’ve ever played. We all played really well. It was definitely a team effort.”

Johnny Vaughn answered with a 3-pointer to restore Bernie’s lead, but Cole Nichols made two free throws with 3:52 to go to give Dexter a 54-53 lead.

Nichols scored a second-chance basket to extend the lead to 56-53.

Andrew Geohagan made the second of two free throws with 1:36 to go to cut the lead to 56-54, setting the stage for the dramatic finish.

“We’ve got to be better in that situation,” Bernie coach Jason Long said of closing out games. “We’ve seen that a few times this year. Quite honestly, we’re all — the kids included — disappointed we didn’t handle that situation better. We’re going to try to learn from it and keep trying to get better.”

Bernie grabbed a 7-1 first quarter lead behind a 3-pointer by Schwent and a pair baskets inside by Geohagan. Schwent and Harty delivered assists.

Geohagan and Schwent paced the Mules with 13 points each.

The Mules went cold from the field and didn’t score again in the quarter, as Dexter closed it with a 10-0 run.

Ellinghouse scored four points during the rally, including a layup on an assist by Henson that gave the Bearcats their first lead, 8-7.

Dexter fans erupted as the buzzer sounded after Nichols made a three-quarter court shot.

Allen opened the second quarter with a 3-pointer to push the Bearcats’ run to 13-0.

Geohagan scored inside on a pass from Gage to interupt the rally, but Carter Dorton drove the baseline for a basket. He drew a foul and made the free throw, and Henson scored on a putback to extend the lead to 10 points (19-9).

Henson finished with a game-high 17 points.

Ellinghouse drew his third foul with 5:35 left in the first half and sat on the bench for the rest of the quarter.

The Bearcats sandwiched a pair of free throws by Sitze around a fall-away shot by Geohagan to lead 22-19.

Schwent drove the lane to cut the lead to one, and Gage followed with a wide-open 3-pointer to give Bernie a 24-22 lead.

Henson scored on a putback before halftime to tie the score at 24.

The Mules heated up from outside in the third quarter, making five 3-pointers to build a lead as large as 10 points.

“We came out in a triangle-and-two. I think it threw them off for a while, especially that first half,” Allen said. “They finally adjusted the second half and they hurt us a little bit, so we had to go back to our regular defense. We picked up the pressure and it really made the difference.”

Bernie scored six of the first eight points of the half to take a 30-26 lead. After Driskill made two free throws with 5:38 to go, Schwent and Zoll made consecutive 3-pointers. Henson made one of two free throws before Zoll made the second of his three third quarter 3-pointers to stretch the lead to 39-29.

The Bearcats fought back behind a pair of 3-pointers, one by Jackson Allen and the other by Ellinghouse to cut the lead t0 39-37.

Harty and Zoll answered with back-to-back 3s, stretching the lead back to eight. Sitze made two free throws with 35.7 seconds left, and the Mules carried a 45-39 lead into the final quarter.

“It was a pretty tight battle,” Long said. “We did get out to a 10-point lead, but it was really early in the third quarter. Our guys did a nice job coming out of the locker room and really played well during the third quarter.”

The victory avenged a 60-55 regular-season loss to Bernie on Jan. 17 at the BEC.

“We all played really hard,” Driskill said. “We all wanted this one so bad because we lost to them in the regular-season game, so we had to win this one.”