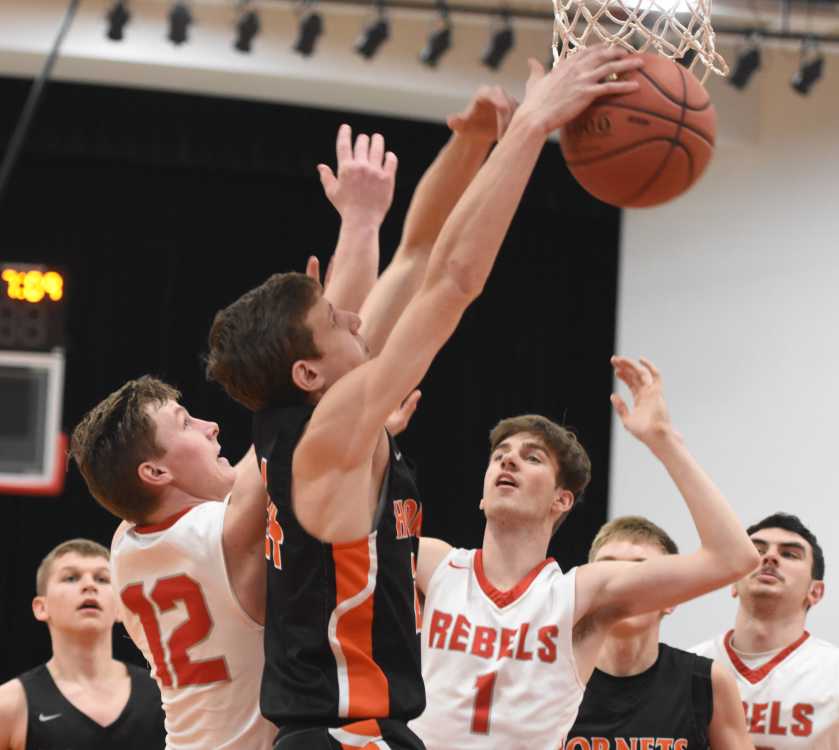 Advance's Jack Below (middle) and Richland's Skylar Oakley (left) and Damon Ivy fight for a rebound under the Advance basket during the first quarter in the third place game of the SCAA boys basketball tournament on Saturday at the Bearcat Event Center.
DEXTER STATESMAN/Kyle Smith

So the Hornets relied on their defense in the third quarter to provide a spark in their 60-46 win over the Richland Rebels in the third place game of the SCAA tournament Saturday at the Bearcat Event Center.

Advance made only 12 percent of its shots in the second quarter and led by only 11 at halftime after a strong first.

The Hornets (15-4) came out in the third quarter, pressing and trapping, and Richland (5-12) committed 10 turnovers in the period.

Advance remained cold from the field early, missing a few layups inside, and the Rebels trimmed their deficit to 31-22 on a putback by Damon Ivy.

“We still missed a bunch of shots in the second half and we gave up too many dribble-drives in the second half,” Advance coach Bubba Wheetley said. “We looked pretty sloppy. I thought we played one good quarter. That’s the first quarter. Other than that, we didn’t play very well. We didn’t rebound. I got one kid who rebounds. We’ve got to get everybody on board there, wanting to rebound. We won’t do it.”

Advance finally started to convert those turnovers into points and strung together an 11-0 run, fueled by nine points by Landon Dailey, who finished with 20. He scored on a full-court pass following a defensive rebound, he turned a steal and an assist by Hayden Hitt into a basket, while drawing a foul. He sank the free throw and scored another bucket on the fast break after another Richland turnover.

Hitt turned a Richland turnover into a layup, interrupting Dailey’s 7-0 run, but the Advance junior secured a steal and scored a layup to push his team’s lead to 42-22.

Below finished with a game-high 23 points.

Richland didn’t go down without a fight, slicing the lead to 14 points three times in the fourth quarter.

“I was proud that they hung in there,” Richland coach Matt Cline said. “If we would have taken care of the ball a little better early in the game, maybe we would’ve been in the same situation we were a couple of weeks ago.”

The Hornets feasted on eight turnovers by Richland in the first quarter and opened the game with a 10-2 run. Below and Dailey scored four points each during the rally.

“Turnovers and free throws,” Cline said of his team’s downfall. “I think we were like 5 for (15) on free throws. The beginning of the game, it looked like we had a seventh-grade team playing against a varsity team, as far as adjusting to the speed. Unforced turnovers were what killed us.”

After Damon Ivy scored on a putback, Advance scored the quarter’s final nine points to take a 23-6 lead into the second.

Hitt began the run with a 3-pointer and he scored the quarter’s final points on a layup following another Richland turnover.

Zach Simms sank a free throw to extend the Hornets’ run to 11-0 in the second quarter, but they struggled offensively in the second, going 2 for 17 from the field.

The Rebels closed their deficit to nine points on a putback by Freeman, but Below scored his first points of the quarter to give Advance a 29-18 halftime lead.