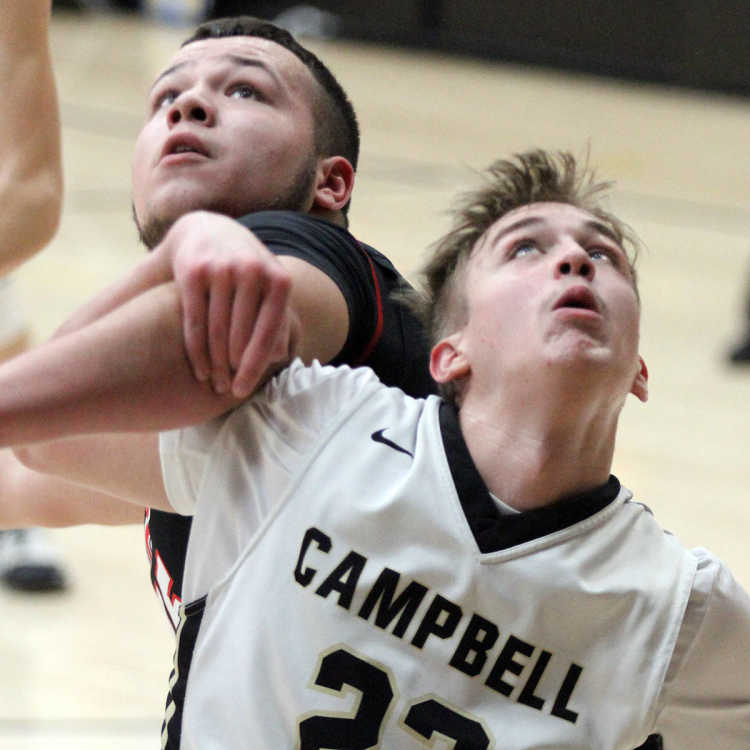 Photo by Dustin Ward, staff
Senath-Hornersville's Jesus Luna (back) and Campbell's Gavin Biggs lockup for a rebound in a quarterfinal of the Bootheel Conference Tournament Saturday afternoon at South Pemiscot High School.
Order this photo

STEELE, Mo. - Time after time the Senath-Hornersville Lions varsity boys basketball squad has displayed the ability to hold its own against Bootheel Conference opponents.

“We lost to Campbell by four, South Pemiscot by four, and Hayti by five,” Senath-Hornersville coach Corbin Clark said. “We’ve been right there with what we feel are some of the best teams in the conference in recent weeks. We've came up just short against several teams on our regular-season conference schedule.”

A big-time conference win finally materialized for the Senath-Hornersville Lions Saturday afternoon in the first round of the Bootheel Conference Tournament at South Pemiscot High School. No. 7 seeded Senath-Hornersville rallied from a 14-point second-half deficit to knock off the No. 2 seeded Campbell Camels 65-61 in a quarterfinal of the seven-team tournament.

“Tonight we finally found the toughness to make some plays late and pick up a conference victory,” Clark said. “I’m so proud of our guys and the way they played today.”

Campbell remained within striking distance of Senath-Hornersville in the closing seconds of the fourth quarter. The Lions led 64-61 after center Isai Lopez made a 2-point basket in the paint with 1:01 remaining.

Campbell elected to push the ball to half court and call a timeout with 30 seconds left after Lopez put the Lions up three. Following the timeout, the Camels worked the ball around the perimeter but could not find an open shooter. As the clock ticked to about five seconds, junior guard Blake Fowler took a contested 3-pointer that made contact with the rim but did not fall.

After the miss, Senath-Hornersville secured the rebound and Knolan Hunter made one of two free throws to set the final score.

“We called a timeout with 30 seconds left and wanted to run a set play out of the timeout,” Campbell coach Steve Fowler said. “We didn’t run it right and didn’t get the open shot we wanted.

"Senath-Hornersville played well today,” Fowler added. “We missed a lot of defensive assignments. We had already played them twice and knew exactly what we needed to do defensively but we didn’t do it. We didn’t execute and it cost us the game.”

Both teams enjoyed leads as large as eight in the see-saw battle. Senath-Hornersville led 30-22 with 5:00 left in the first half before Campbell closed out the first half on a 10-1 run to move ahead 32-31 at halftime. The Camels also scored the first 10 points of the second half to move ahead 45-31 by the midway point of the third quarter.

But Senath-Hornersville managed to cut the deficit to 53-45 by the end of the third quarter and tied things up at 56-all by the 3:32 mark of the fourth quarter.

“We were able to weather the storm,” Clark said. “I told the guys at the end of the third quarter after we cut it to eight, ’They’ve made their run and I think it’s time to make ours.’ And we did. We made that final push and luckily the time ran out and we came out on top.”

“Those seniors were tough for us down the stretch,” Clark said.

Junior guard Parker Rhew also enjoyed a strong night from start-to-finish. Rhew knocked down at least one field goal in every quarter on his way to an 18-point performance.

“Parker carried us throughout the game,” Clark said. “He was steady handling the ball for us all night. When we couldn’t find offense he created it for us tonight."

Fowler recorded multiple field goals in every quarter on his way to a game-high 29 points for the Camels.

Clark said without the defensive performance of freshman Jaxon Layne late the standout Fowler could’ve put up many more points.

“Jaxon really stepped up and guarded late,” Clark said. “I think Blake Fowler is the best player in our conference and Jaxon did about as well as anyone can guarding him down the stretch. I’m really of proud of the way he stepped up in a high-pressure situation.”

“We’ve got a week to get back in the gym and work,” Fowler said. “We will have a week full of practices and maybe it will be good for us moving forward.”

“A couple of years ago we got a win in this tournament for the first time in 20 years,” Clark said. “That was a big accomplishment for our program and I thought it got our guys over a bit of a hump and we started to believe we could win games like the one we played in today.”

Senath-Hornersville will square off against No. 6 seeded South Pemiscot Tuesday at 8:30 p.m. in a conference semifinal at South Pemiscot High School.

“Whoever you play in this league it’s going to be a fistfight,” Clark said. “We will enjoy this one tonight and came back on Sunday and get ready to roll against our next opponent.”