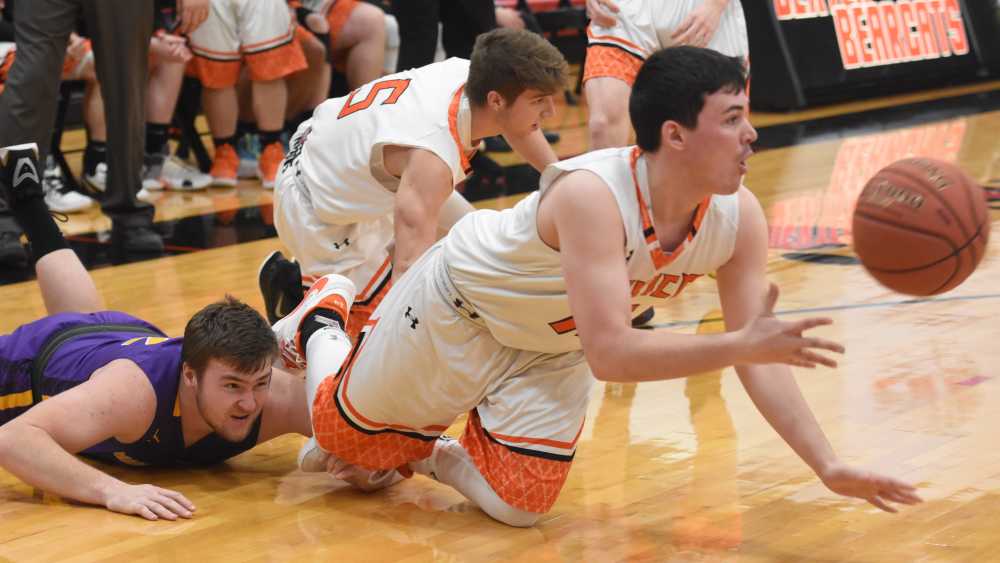 Puxico's Lucas Plunkett (right) unloads the ball after a scramble on the floor, including Bloomfield's Parker Heaton (left) and teammate Ethan Helm, during the first quarter in the consolation championship game of the SCAA boys basketball tournament Saturday at the Bearcat Event Center in Dexter.
DEXTER STATESMAN/Kyle Smith

DEXTER — The Puxico boys basketball team showed a spark on defense after halftime and won the consolation championship game of the SCAA tournament.

The fourth-seeded Indians outscored sixth-seeded Bloomfield 21-9 in the third quarter en route to a 67-46 victory Saturday at the Bearcat Event Center.

“That’s a big key for us, coming out and playing hard,” Puxico coach Jim Jones said. “Intensity is what helps us play better offensively.”

“We turned it over a ton, especially to start the second half,” Bloomfield coach Brandon Crook said. “That didn’t help us. That gave them a lot of momentum, too. They got up and started running a little bit. We didn’t do what we had to do to counter that, as far as getting back on defense and playing with some urgency.”

Parker Heaton’s 3-point play sliced Puxico’s lead to 31-23 at the start of the third, but the Indians responded with a 14-2 run that featured several fast-break baskets. Ethan Helm scored on a steal and a layup. After a Bloomfield turnover under its own basket, Bailey Zych caught a full-court pass under Puxico’s basket. He scored, drew a foul and made the free throw.

Zych added a driving layup on a fast break ignited by a defensive rebound, and the Indians led 41-23.

After Jamison Dodd the scored the first of his three putbacks in the third, Joel Bannister scored on a feed from Lucas Plunkett and Dalton Andrews finished after pass inside by Matt Caldwell.

Helm added another 3-pointer and made two free throws, and Andrews drew a foul while trying to convert a turnover into a basket. He made both shots and the Indians increased their lead to 52-27.

Puxico took a commanding 52-29 lead into the final quarter.

“I felt like we played a lot better today,” Jones said. “We had a lot more balance. … We didn’t rebound and control the paint as much we wanted, but I was pretty happy with the effort. We scored when we needed to. We were unselfish. It’s a good win for us.”

A night after combining for 35 points in the Wildcats’ win over Woodland in the consolation semifinals, Dodd and Heaton combined for 20 points, 10 each.

“Jamison and Parker had good games last night,” Crook said, “and (Puxico) focused in on that, which is what you’ve got to do. We didn’t adjust very good to it.”

The lead changed hands three times in a back-and-forth first quarter. Brandon Wright’s jumper in the lane gave Bloomfield a 2-0 lead. Helm sank a 3-pointer to give Puxico a 5-2 advantage.

The Wildcats scored six straight points to take a 10-7 lead. Jeffrey Jarrell scored from along the baseline to give them an 8-7 lead. Helm scored on a driving layup that put the Indians ahead 11-10 and they maintained the lead for the rest of the game.

Nolan Foster scored on a pass from Andrews, giving the Indians a 16-12 lead heading into the second quarter.

Zych closed the half with a pair of driving layups, and the Indians led 31-20 at halftime.