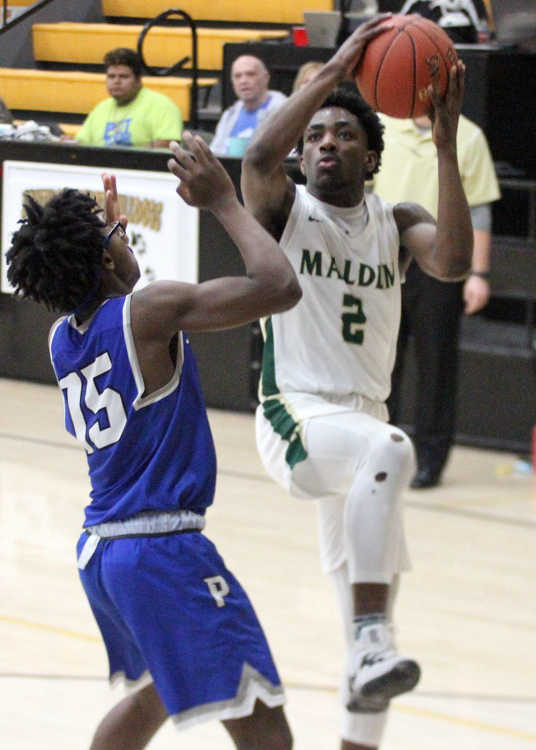 STEELE, Mo. - The Malden Green Wave varsity boys basketball squad continues to find ways to get the job done in the 2020 portion of its schedule.

Such was the case again Saturday afternoon when No. 4 seeded Malden beat the No. 5 seeded Portageville Bulldogs 60-55 in a quarterfinal of the Bootheel Conference Tournament for its sixth win in its last eight games.

Malden, which went 3-7 in the month of December, now finds itself within one game of .500 at 9-10 following its latest close victory.

Malden led by 12 points or less most of the way against Portageville Saturday at South Pemiscot High School.

Four Malden players recorded at least one field goal in the opening quarter as the Green Wave built an 18-11 lead by the start of the second period.

The Green Wave’s lead swelled to 22-11 by the six-minute mark of the second period when Trey Currie drained a 3-pointer.

Portageville scored eight of the next 10 points to cut the deficit to 24-19 and force a Malden timeout with 4:01 left in the first half.

Malden continued to lead 32-25 at halftime and scored the first five points of the second half to increase its lead by to double digits at 37-25 with 6:00 left in the third quarter.

Malden led by as much as 56-45 in the fourth quarter before Portageville managed to cut the deficit to one possession with 1:11 remaining when Alex Winsor hit a free throw to narrow the margin to 58-55.

Jones followed with a 2-pointer in the paint on the Green Wave’s next possession to pad the margin back to five and Portageville never scored after.

“Coach Irby is one of the best in my opinion,” McBroom said. “We knew they wouldn’t lay down and roll over. Portageville continued to fight because they get that energy from Coach Irby. Our guys also did a great job of withstanding their runs and continuing to do the things we needed to do to be successful.”

“We are just so soft on the glass,” he said. “We get out rebounded every game. We’ve talked about it but until our kids decide to get tough we are going to continue to lose these types of games because we get no second-chance opportunities. But hats off to Malden because they do a good job crashing the boards. We can learn a lesson from the way they rebound.”

“At times we’ve been one or two heavy on scoring,” McBroom said. “I think our balanced scoring today shows our guys are starting to play with more confidence. A good example is Chris Castillo. He should be a confident player because of the work he puts in. I’m really glad to see someone that puts in that much work get rewarded. You become a confident player by putting in hours of work and Chris has put in hours and hours of work.”

“We will certainly try to use the week off to our advantage again,” Irby said. “But we’ve got a different bunch of kids this season. We’ll have to see how these kids respond. We’ve got a challenge ahead of us this week as coaches for sure.”

Malden will take on No. 1 seeded Hayti in a conference semifinal Tuesday at 5 p.m. Hayti beat Malden 69-66 in the first head-to-head meeting Jan. 21.

“They are a very good, athletic team with a fantastic coach,” McBroom said. “We will have to do a couple things better than we did last time against them. We feel like we can give them a run for their money and maybe keep playing in this thing.”