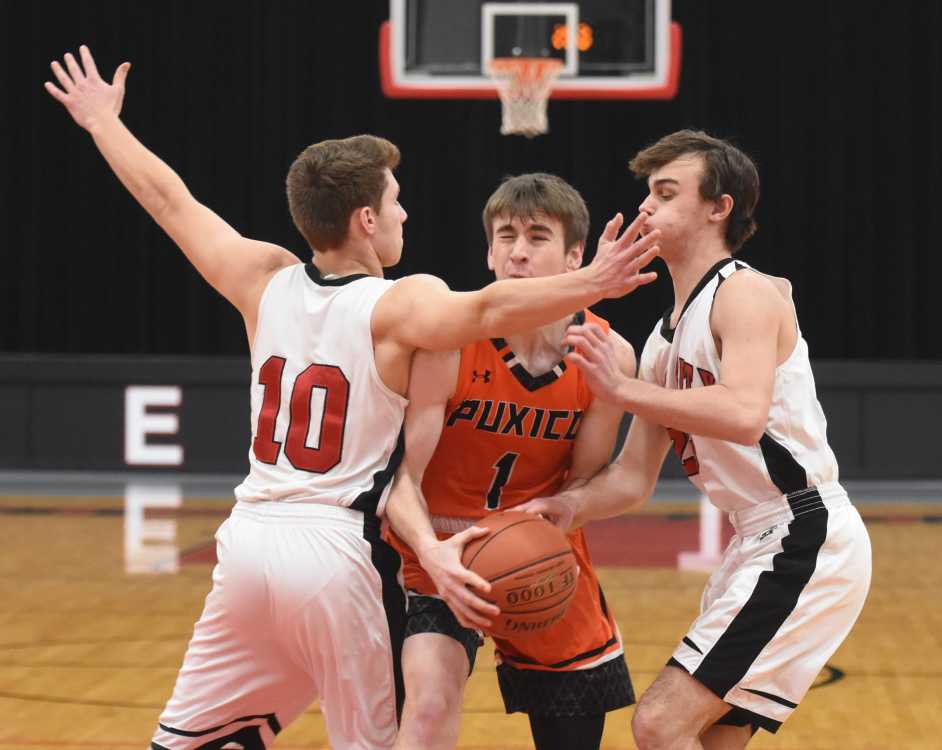 DEXTER — The Puxico Indians created a pair of late turnovers and made 7 of 10 free throws in the final minute to beat Bell City 62-57 Friday night.

The win sends the fourth-seeded Indians (6-12) into the consolation championship game of the SCAA boys basketball tournament. They will face sixth-seeded Bloomfield at 1:30 p.m. Saturday.

The game was close from the opening tip and featured eight lead changes, and the score was tied three times.

Puxico led by as many as seven points in the first quarter, and Bell City (2-15) was ahead as many as five in the second.

“(Bell City is) much improved. They were a lot better than the last time we saw them,” Puxico coach Jim Jones said. “With that being said, we didn’t take care of our business as well as we should have, but you can’t take anything away from them. They played well tonight.”

The Cubs took a 39-36 advantage into final quarter, but Puxico recaptured the lead when Dalton Andrews scored after his team had missed three shots on one possession.

Luke Nichols scored a fast-break layup to put the Cubs ahead 41-40, but Matt Caldwell scored in the paint with 6:18 to play to put the Indians ahead to say.

The Cubs kept applying the pressure and cut the lead to two points (57-55) with 27.6 second left on a long 3-pointer by Jack Duenne.

After Caldwell’s free throw extended Puxico’s lead to 58-55, the Cubs committed turnovers on back-to-back possessions and they fouled Andrews and Ethan Helm, who went a combined 3 for 4 on free throws to stretch their team’s led to 61-55.

Nichols drove the lane on a fast break and finished, slicing the Cubs’ deficit to 61-57, but Bailey Zych made a free throw with 6.8 seconds remaining to secure the win.

“When our effort goes up, our play goes up,” Jones said. “We got after it a little better when we needed to. I wish we didn’t have to wait until our back’s against the wall to do that.”

Bell City coach Dom Johnson was proud of his team despite the loss.

“We played hard,” Johnson said. “I just think down the stretch, we didn’t make the plays we needed to to win. If we would just cut out some of our bonehead plays where we just make mistakes at the end of the game when we’re in a hurry, I think we can finish out some games.”

Bell City’s Nichols scored a game-high 31 points, including four 3-pointers and a 8-of-10 showing from the foul stripe.

“That Nichols kid can play,” Jones said. “He had a great game.”

Helm led a balanced Puxico attack with 16 points, including a team-high three 3-pointers. Lucas Plunkett had 13 points, Zych 11 and Caldwell 10.

After Nichols scored on a putback to give Bell City a 2-0 lead, the Indians answered with an 8-0 run and maintained the lead into the second quarter.

Plunkett made two 3-pointers during the rally and Zych’s driving layup extended the Indians’ lead to 10-3.

Puxico carried a 15-11 lead into the second quarter where the Cubs opened with a 9-0 run to take a 20-15 lead. Nichols scored seven of those points, including a 3-pointer.

The Indians responded with an 8-2 run to take a 23-22 lead. Joel Bannister and Helm produced 3-point plays, and Helm sank a 3 following one of Bell City’s five first quarter turnovers to give them a 26-22 halftime lead.