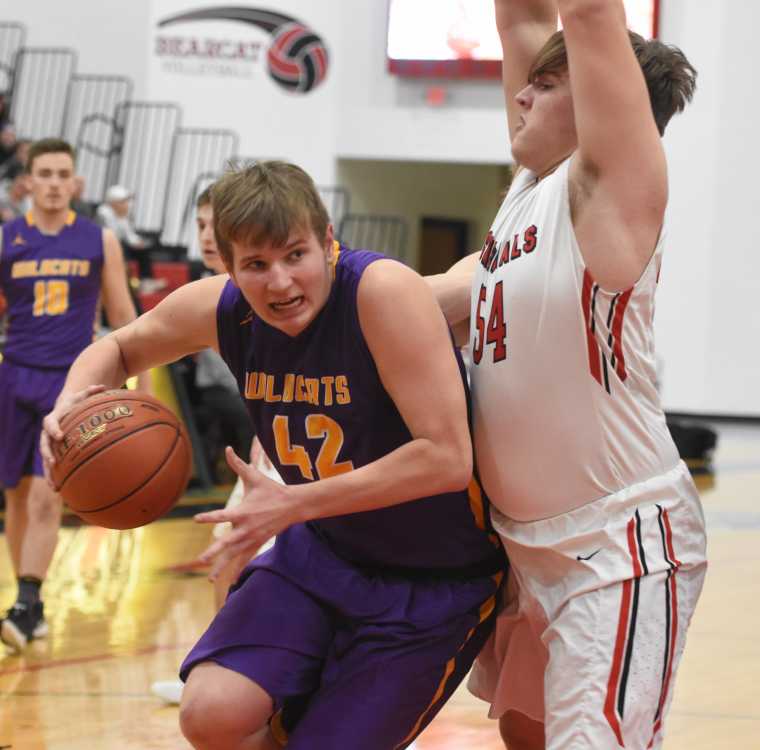 Bloomfield's Jamison Dodd (42) tries to get around Woodland's Rafe Johnson during the first quarter of the consolation semifinal of the SCAA boys basketball tournament Friday, Jan. 31, 2020, at the Bearcat Event Center in Dexter.
DEXTER STATESMAN/Kyle Smith

DEXTER — Jamison Dodd and Gage McNeil played keys roles for the Bloomfield Wildcats in the consolation semifinals of the SCAA boys basketball tournament.

Dodd scored a team-high 20 points and McNeil made the defensive play of the game in the sixth-seeded Wildcats’ 55-54 win over seventh-seeded Woodland on Friday night.

The Wildcats (3-13) will meet fourth-seeded Puxico in the consolation championship game at 1:30 p.m. Saturday.

Dodd broke a 54-all tie by making 1 of 2 free throws in the closing seconds.

Woodland called a timeout with 3.7 seconds to go, and coach Paul Lynch elected to get the ball to Jamon Frymire, who scored a game-high 22 points.

Frymire got the ball along the right baseline and he drove toward the basket. McNeil met him near the lane and knocked the ball away as time expired.

“Gage came up with a huge stop for us down there,” Bloomfield coach Brandon Crook said. “He kind of redeemed himself because he had that open look, the layup, with about 10 seconds left. He missed and Jamison got the rebound. He was bummed a little bit but he redeemed himself right there.”

Dodd scored 11 of his points in the third quarter, keeping the Wildcats close.

“He had a great game,” Crook said. “That’s the thing. We were taking what we were successful at and scoring off of it in the third quarter. … We were dumping it in a lot to him. That what’s ultimately got us a win. If he hadn’t had that big third quarter, we may not have come out on top.”

Bloomfield carried a 29-20 lead into the third where the Cardinals held a 20-16 scoring advantage.

The Wildcats maintained the lead throughout the third, although Woodland climbed within five points twice — 36-31 on a putback by Tyson Moyers and 45-40 on a 3-pointer by Frymire near the end of the quarter.

In the fourth, Rafe Johnson’s putback gave the Cardinals their first lead since 16-15 at the end of the first quarter. The junior’s basket gave them a 49-48 lead.

Parker Heaton, who finished with 15 points, scored on a putback to give the lead back to the Wildcats.

Bloomfield never trailed again, although the Cardinals tied the score three times before the exciting finish.

The Cardinals kept pace with Bloomfield behind their perimeter shooting, making eight of 19 shots from beyond the arc.

Frymire sank three 3-pointers, and Carter Mayfield made four and finished with 16 points.