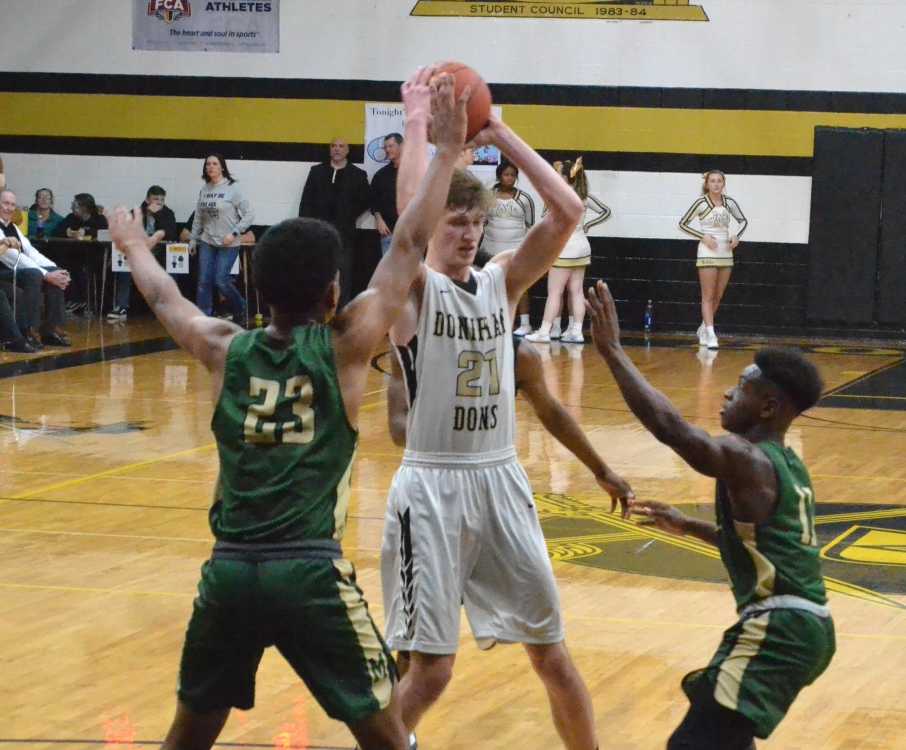 Doniphan's Orie Owen is guard by Malden's Sientez Lerma and Lamar Smith during Friday's high school basketball game at Doniphan. The Green Wave rallied past the Dons in the second half, 58-46.
Ron Smith

“Whenever he gets going downhill, he is fun to watch,” said Malden coach Cole McBroom after watching Wade score 21 of his game-high 25 points in the final 11 minutes to spark a come-from-behind 58-46 win over the Dons.

Malden outscored the Dons 41-18 in the second half after trailing 28-17 at the break.

“When they got that dunk, their guys had a lot of energy and our guys kinda melted,” said Doniphan coach Daniel Cagle.

Wade scored the first 10 points of the fourth quarter as Malden never trailed after the dunk.

Doniphan was held without a field goal in the fourth quarter while shooting 0-of-10 from the field and 5-of-25 in the second half.

Malden’s halfcourt trapping defense proved effective down the stretch as Doniphan committed 11 of its 17 turnovers in the last 10-1/2 minutes.

“I thought we were well prepared and played really well in the first half” said Cagle, whose Dons took their biggest lead at 31-17 on Nolan Czerwonka’s 3-point basket to open the third quarter.

McBroom quickly called a timeout for the the Green Wave, who had managed to score only five points in the second quarter.

“The message was simple,” he said. “They were killing us on the boards and we weren’t playing with the energy that we needed to be playing with. I guess it clicked.”

Chris Castillo and Lamar Smith each connected on 3s for the Wave before Wade scored six unanswered points to help cut the deficit to 40-36.

Smith followed with another 3 just ahead of the buzzer to pull Malden within 42-41, setting the stage for Wade’s momentum-shifting dunk to open the final quarter.

“We’re a young team just like Doniphan and this was a huge win for our growth,” said McBroom, whose team finished January with a 5-3 record (now 8-10 overall).

“We’ve had some good practices and grown together as a group. We’re getting better and better everyday,” he said.

“This one hurts and the guys are upset because we haven’t lost in a while,” said Cagle.

Doniphan saw a three-game winning streak snapped while losing for just the four time in the past 12 games.

Cagle looks for his team to bounce back Tuesday night when it host Neelyville in a game to decide the regular season championship in the Ozark Foothills Conference.

“We will be outright champs in the OFC for the regular season if we can win on Tuesday,” the coach said. “Thats what we’ve got our sights set on right now.”