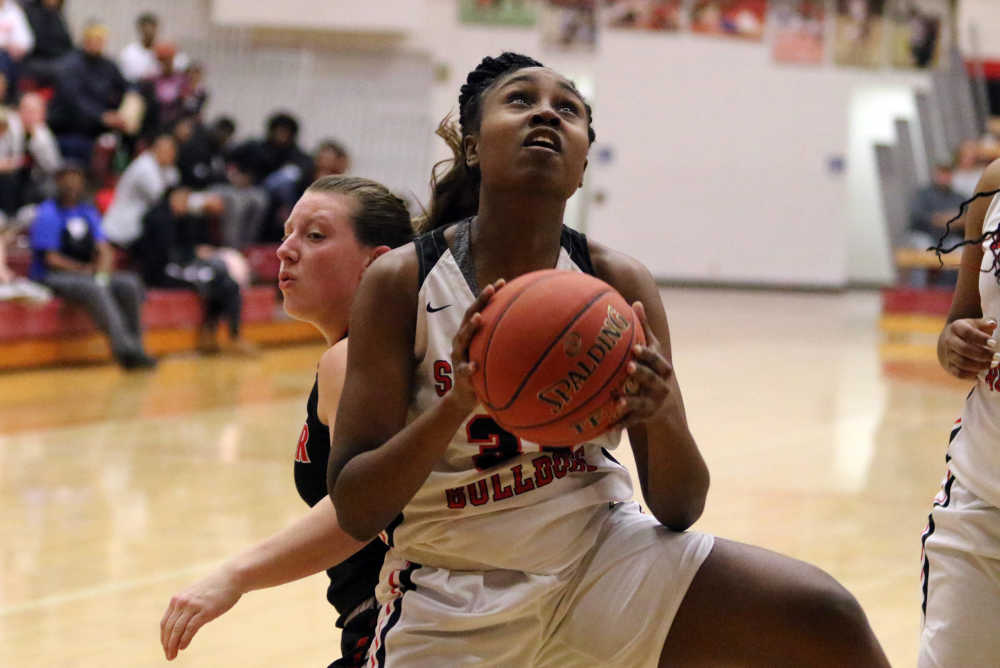 SIKESTON, Mo ñ In recent weeks, Sikeston head coach Alisha Wills has stressed to her team a renewed emphasis on playing a consistent 32 minutes of basketball.

This week the Lady Bulldogs have seen the results with a pair of wins over Class 4, District 1 rivals to kickstart their second half of the season and move to within a game of .500.

Building on Mondayís 15-point road-win over Perryville, Sikeston jumped on top of Dexter early Thursday night and carried a double-digit lead the entire second half to down the Lady Bearcats 72-45.

ìWe put together four full quarters,î Wills said of her teamís win over Dexter. ìThatís something Iíve been preaching to them. We did that Monday night against Perryville, and that was the thing going into tonight, that we have to have another night just like that.

ìIt has to be four full quarters, and you have to get after it.î

Sikestonís start set the tone, opening the game 6 of 8 from the field to build a 19-4 lead six minutes into the contest.

Dexter (3-15) regrouped to close their deficit to 10 points entering the second quarter, 21-11, but the closest the Lady Bearcats to get to Sikeston (8-9) was within nine points midway through the frame.

With a 12-2 run to end the second quarter, including the final eight points of the half, the Lady Bulldogs took a comfortable 40-21 advantage into halftime.

ìThatís something with this young group that I stress to them when we start a game,î Wills said of the strong start. Letís get out and set the tempo. Letís make it our game from the tip. They took care of the ball and did what they were supposed to do with it.î

ì(Allenís) making things happen and creating things,î Wills said. ìSheís good about getting people involved in the offense and seeing someone open. Her nights are the best when she gets others involved.

ìI love to see her crash the boards and get rebounds and stick-backs. Thatís huge too.î

After Dexter closed back within 15 points to open the third quarter on a 12-3 run, Sikeston extended their lead to 58-37 entering the fourth.

Though the Lady Bearcats ensured the turbo-clock never kicked in, they were unable to get any closer than 19 points in the final frame.

ìI hope we learned a little bit tonight,î Dexter head coach Eric Sitze said. ìTheyíre athleticism hurt us tonight. Rebounding hurt us. They sped us up on offense some.

ìWeíre improving. Half the game we did some good things, the other half we didnít. Weíll keep learning.î

Allen and Blissett both came away with a game-high 21 points to lead the Lady Bulldogs, including Blissett hitting three of the teamís six 3-pointers on the night.

Barnett finished with 18 points, going 4 of 5 from the free-throw line.

ìWeíre out there on the floor with just one senior,î Wills said. ìWe rely on sophomores to fill in gaps and freshmen. Iím bringing up three freshmen. Theyíre seeing sizable minutes.

ìI think weíre getting to that point where everything is starting to come together, and weíre figuring out things and maturing physically and mentally.î

Leading Dexter was senior Alexa Werneck, hitting three 3-pointers on her way to 16 points. Sophomore Dulcie Pullen was second on the team with 12 points.