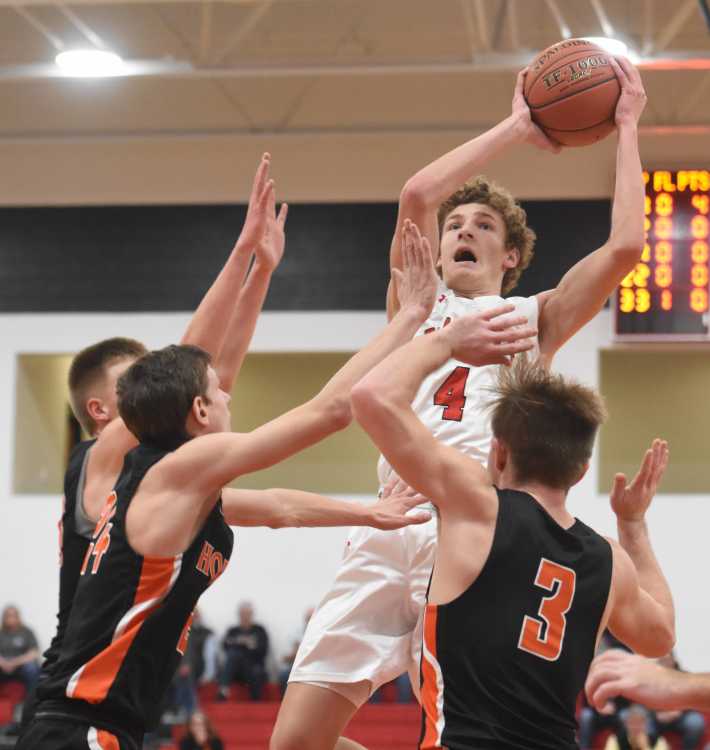 Dexter's Andrew Ellinghouse shoots above a trio of Advance players during the first quarter of the SCAA boys basketball tournament semifinal Thursday, Jan. 30, 2020, at the Bearcat Event Center in Dexter.
DEXTER STATESMAN/Kyle Smith

DEXTER — Carter Dorton made two free throws with 5.4 seconds remaining, and the second-seeded Dexter Bearcats held off Advance 54-52 in the semifinal round of the SCAA boys basketball tournament.

Advance’s leading scorer, Jack Below, fouled Dorton on a 3-point try from the right corner, and Dorton made 2 of 3 attempts against the third-seeded Hornets on Thursday night at the Bearcat Event Center.

The Bearcats (10-6) will face top-seeded Bernie in the championship game at 7:30 p.m. Saturday.

The lead changed hands 12 times, including on six occasions in the fourth quarter.

Below finished with a game-high 25 points, including a 15-of-20 performance  from the free throw line.

“I don’t think he got his usual numbers,” Dexter coach Chad Allen said. “I think our 1-2-2 created some scoring problems for him, but the one thing that he did do was get to the free throw line — a lot. He wasn’t getting a whole lot of looks shooting, so he just decided to take it off the dribble and try to get to the rim. That’s what he’s good at.”

Below averages 31.7 points per game.

Andrew Ellinghouse paced Dexter with 17 points with 13 coming after halftime.

Jaren Schrader scored on a pass from Landon Dailey to give the Hornets a 48-47 lead with 3:30 remaining, their first lead since 36-34 in the third quarter.

Ryder Boles drove the baseline to give Dexter a 49-48 lead, and Below made two fouls shots to hand Advance a one-point lead. Dexter’s Cole Nichols scored on a driving layup for a 51-50 lead, and Dailey finished inside on a pass from Zach Simms to put the Hornets ahead 52-51.

Garrett Henson made a free throw with 2:13 to play to tie the score at 52, and Below missed a shot from the paint near the 1-minute mark.

“That was a grind all game,” Allen said. “We definitely got in a lot of foul trouble. That definitely hurt us a little bit. One thing about Advance, they guard hard and they get after you. That created some problems for us.”

The Bearcats committed 14 first half fouls compared to Advance’s five.

Jackson Allen, Boles and Dylan Sitze each drew three fouls in the opening two quarters but none of them fouled out.

The first half was tightly contested. The score was tied six times. The lead changed hands on four occasions.

Dexter held the half’s biggest lead of four points — 14-10 on a jumper by Peyton Driskill and 24-20 on a 3-pointer and a free throw by Nichols.

Ellinghouse drove the lane to tie the score at 4 and Allen scored on a putback for a 6-4 lead.

The Bearcats came out aggressive after halftime, attacking the basket and pushing their lead to as many as six early.

“That’s what we talked about at halftime,” Allen said. “We really weren’t aggressive off the dribble that first half. I thought we did a much better job in the second half. When we did that, we broke ’em down and had some good looks, but you’ve got to learn to do that the whole game.”

Advance tied the score at 34 on a 3-pointer by Simms and took a 36-34 advantage on basket inside by Schrader for the team’s first lead since 18-17 in the second quarter.

The Bearcats recaptured the lead when Ellinghouse scored a second-chance basket, drew a foul and made a free throw.

Nichols followed with a 3-pointer. Hayden Hitt scored a fast-break basket before quarter’s end, and the Bearcats took a 40-38 lead into the fourth period.

Dexter extended its lead to as many as four on three occasions before the back-and-forth finish began.

“I’m very, very proud of the kids,” Wheetley said. “To me I think we grew up a little bit tonight. I think we’re getting better. … I wanted to win this thing. You always want to win, but I told them you’ve got to come back now and you’ve got to win third.”