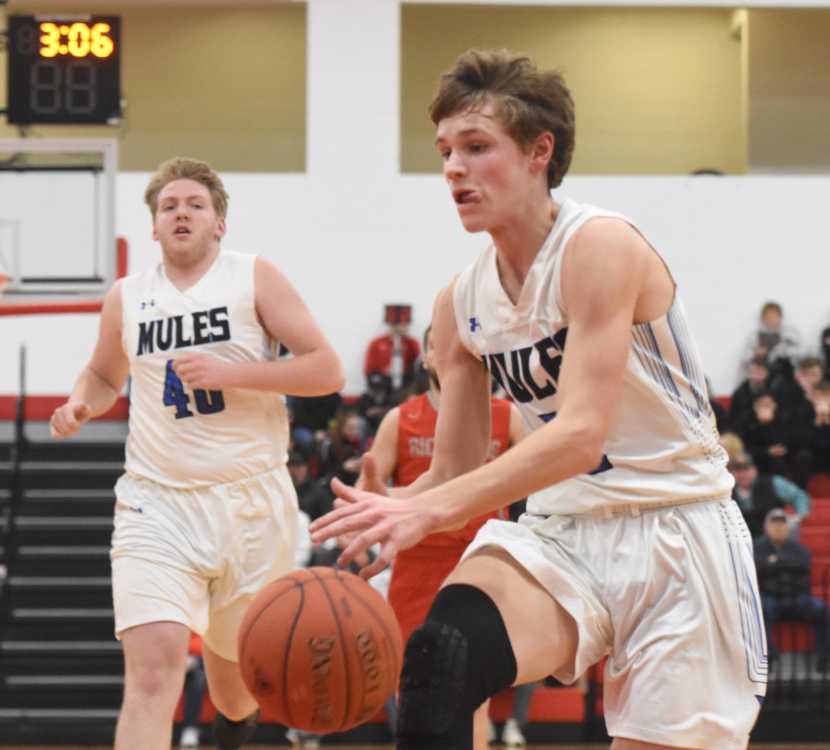 Bernie's Landon Zoll (right) races toward the basket on a fast break against Richland during the semifinals of the SCAA boys basketball tournament Thursday night at Dexter.
DEXTER STATESMAN/Kyle Smith

DEXTER — The Bernie Mules’ outside shooters struggled in the first half, but their defense helped make up for the cold start.

The fifth-seeded Richland Rebels committed nine first half turnovers — six in the first quarter — and the top-seeded Mules rolled to a 79-29 victory in the semifinals of the SCAA boys basketball tournament Thursday night at the Bearcat Event Center.

The Mules went 3 for 10 from outside the arc in the first half but held Richland to 6-of-21 shooting before the intermission.

Richland went 2 for 8 from the field in the opening quarter.

“We played a good game defensively,” Bernie coach Jason Long said. “They’ve got a couple of kids who can score the ball. (Tanner) Freeman’s a good player and (Damon) Ivy had 22 against Puxico in the first round. We needed to make a concerted effort to guard well. I felt like that kind of carried us in the first half because we struggled getting into a flow offensively.”

Freeman finished with a team-high 10 points. Andrew Partenberry had nine, and Ivy and Skylar Oakley had four each.

Zoll’s jumper in the lane gave the Mules a 2-0 lead and they never trailed, although Freeman’s floater from the paint tied the score at 2.

Bernie responded with a 10-0 run that included a 3-pointer and two free throws by Harty and four points by John Nimmo. Vaughn’s free throw gave the Mules a 12-2 advantage.

The Rebels cut the lead to six on a free throw by Partenberry and a 3-pointer by Freeman. Harty followed with a fall-away jumper to give Bernie a 14-6 lead heading into the second quarter.

Partenberry sank a jumper to cut Richland’s deficit to six at the start of the second, but Vaughn and Harty made back-to-back 3-pointers to extend Bernie’s lead to 20-8.

After Oakley scored inside with 4:44 left, the Mules’ Skyler Schwent came up with a steal and a layup and Geohagan scored inside to extend their lead to 14.

Richland twice cut its deficit to 12, but the Mules finished the half on a 6-0 run. Nimmo scored from under the basket, and Schwent scored a couple of fast-break baskets to give them a 32-14 halftime lead. His first layup came after a defensive rebound and the other on the Rebels’ third turnover of the quarter.

“Skyler doesn’t get to shoot very much, so it’s good for him to get a chance to score some points,” Long said.

Bernie increased its lead to 33 points in the third quarter behind an efficient offense, which went 11 of 13 from the field, including 7 for 7 from inside the arc.

“Second half, we got into more of a flow,” Long said. “Andrew had a great stretch there. His teammates did a good job feeding him the ball. He did a good job of getting good positioning and played really strong. That really helped jump-start us in that second half. When you get that offensive balance, you’re better off.”

Harty and Zoll made two 3-pointers each, and the Mules began working the ball inside where Geohagan scored eight points.

Zoll and Harty each made four 3s in all.

The Mules took a 58-25 lead into the final quarter and the clock ran continuously in the fourth because of the 30-point mercy rule.