Southeast Missouri (15-5, 7-2 Ohio Valley Conference) never trailed after the first quarter, yet faded down the stretch in Kentucky Thursday, hanging on to beat Morehead State, 67-61.

Southeast had a 25-point lead early in the fourth quarter only to watch as repeated turnovers and the hot hand of a remarkable Eagles freshman narrowed the gap to just four points in the final minute.

"I was very disappointed with the way we finished (the game)," said coach Rekha Patterson. "We don't always make things easy for ourselves."

After a seven-hour road trip that took the women's team into the Eastern Time Zone, Southeast battled Morehead to a 10-10 tie after the opening ten minutes, then opened a 35-23 lead at halftime despite going nearly eight minutes without scoring.

The Redhawks missed nine shots in a row during that drought yet thanks to a stout Southeast defense, the Eagles were unable to take advantage.

The second half saw the streaky play continue as Southeast went on a 20-0 run to build the 25-point advantage in the final frame, 59-34.

The Eagles answered by chipping away at the big advantage, cutting the lead to four with 29 ticks on the clock, 65-61, before Southeast closed it out with two late free throws to end it, 67-61.

"When we struggle," Patterson said, "I need to encourage the ladies a bit more," a reference to a book by Renee Brown entitled "Dare to Lead."

"(Brown) writes that people often believe they're doing the best they can." 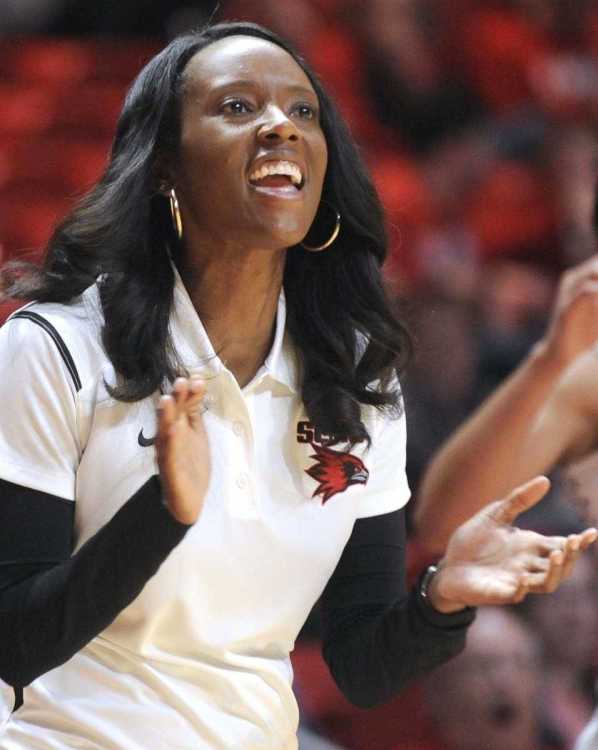 Southeast women try Thursday for their 6th straight win
Jeff Long
Even in the midst of a five-game winning streak, including two straight road victories, Southeast coach Rekha Patterson doesn't believe in getting out too far ahead of her skis. Southeast (14-5, 6-2 Ohio Valley Conference) plays today at Morehead State (8-12, 4-4) and to talk to the fifth-year coach, you'd think her Redhawks were the underdog...

When it was suggested that Southeast had become a streaky team, the fifth year Redhawks skipper did not disagree.

"You are," Patterson said, "who the numbers say you are."

Morehead State freshman Ariel Kirkwood had the most impressive individual stats, scoring 25 points, going 13 for 15 from the line, with 15 rebounds and eight blocks.

It was an outstanding effort for a young player in a losing outing for Morehead State (8-13, 4-5).

"We'll have to see (Kirkwood) for three more years," said Patterson, who went on to say she regretted the defensive alignment she schemed for the first-year player.

"I need to coach better so I can make the adjustment sooner against (Kirkwood)," she said. "We should have dropped into man-to-man coverage so that Tesia (Thompson) could guard her."

Tesia Thompson paced the Redhawks with a double-double with 20 points overall, including going 6-for-7 at the charity stripe and muscling 11 rebounds.

Carrie Shephard had 18 for the winners including four treys.

Patterson said she was pleased that her squad gave up only a total of 15 offensive rebounds to Morehead State - after giving up 13 in the first half.

"We did better protecting the boards," said Patterson, whose overall mark at Southeast now improves to 70-70. "But we had too many turnovers in the second half."

LaTrese Saine came off the bench with four blocks for Southeast.

With the win, the Redhawks match the largest number of wins during Patterson's tenure, first achieved when Southeast won 15 games in her first season in Cape in 2015-16.

Patterson said it's important to keep any one game in perspective.

"I don't want us peaking too soon," she said. "I want us playing our very best basketball going in March."

The Redhawks remain in Kentucky to play Eastern Kentucky Saturday afternoon before returning home Feb. 6 to play Jacksonville State at the Show Me Center.